Cultural activities in India are undertaken by the the Aga Khan Trust for Culture (AKTC).  The largest cultural project to date has been the restoration and revitalisation of Humayun's Tomb, including its gardens.  These activities have since expanded to social and cultural programmes in the neighbouring Nizamuddin area, as well as to Sunder Nursery and a number of monuments in the historic district.  In Hyderabad, a project to restore the Qutb Shahi tombs is also underway.

The Initiative, in the heart of Delhi, India, combines a cultural heritage project with socioeconomic initiatives.  The overall objective of the project is to improve the quality of life for people in the area while creating an important new green space for the people of Delhi and beyond.

Named after the revered saint Hazrat Nizamuddin Auliya, who lived here in the early fourteenth century, the area has witnessed centuries of tomb building as it has been, and still is, considered auspicious to be buried near a saint’s grave.

Following the successful restoration of the Humayun’s Tomb gardens in 2004, the Urban Renewal initiative commenced with the signature of a Public-Private Partnership memorandum of understanding on 11 July 2007.  The non-profit partnership includes the Archaeological Survey of India, the Central Public Works Department, the Municipal Corporation of Delhi, the Aga Khan Foundation and the Aga Khan Trust for Culture.  The project will unify the three zones into an urban conservation area of considerable breadth and cultural significance while improving the quality of life for resident population.

The project integrates conservation, socioeconomic development and urban and environmental development objectives in consultation with local communities and relevant stakeholders.  Since its inception, the project has attracted additional partners and received co-funding from the Sir Dorabji Tata Trust, Ford Foundation, World Monuments Fund, Sir Ratan Tata Trust, the Embassy of the United States, J.M. Kaplan Fund, amongst others.

Following the restoration of Humayun's Tomb, the Aga Khan Trust for Culture began the restoration of the Qutb Shahi Royal Tombs in Hyderabad, India.  The Quli Qutb Shah Archaeological Park includes 70 structures, encompassing 40 mausoleums, 23 mosques, five step-wells/water structures, a hamam (mortuary bath), pavilions, garden structures and enclosure walls built during the reign of the Qutb Shahi Dynasty that ruled the Hyderabad region for 170 years in the 16th and 17th centuries.

The Tombs lie to the northwest of the Golconda Fort in Goldconda, a former hill fort that flourished from the late 15th century until 1591/999 AH.  The tombs are approached through Banjara Darwaza or from the Toli Chowki Road. The entire Qutb Shahi dynasty is buried here, with the exception of Sultan Abulhasan Tana Shah, who was exiled to Aurangabad.

The tombs are spread out over a low plateau, and share a common form: an onion dome atop a square plan tomb, surrounded by an arcade with rich ornamental details, and with corner minarets. The tombs are built of local granite and plaster.

AKTC also completed the conservation of Abdur Rahim Khan-i-Khanan's Mausoleum in Delhi, India, in 2020. Rahim, Commander-in-Chief of the Mughal army, was not only a noble in the court of Emperor Akbar, but he was also a statesman, courtier, linguist, humanitarian, patron and, above all, poet. However, it is the mausoleum he built in AD 1598 for his wife, Mah Banu, that is the grandest of his surviving buildings - inspired by the architectural style of Humayun's Tomb and, in turn, inspiring the Taj Mahal. On his death, Rahim was also buried in this mausoleum. 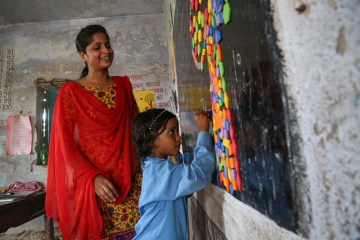