To stimulate long-term economic growth in the country, AKDN operates across the spectrum, from working with women and youth in isolated rural communities to help create their own start-up businesses, to building micro-hydroelectric plants that help light homes, schools and health facilities in these remote villages, to investing in large-scale mobile phone services that provide network coverage to more than 6.5 million Afghans across the country’s 34 provinces. In cases like the latter, because of its institutional background and ethical framework, AKDN’s criteria for making commercial investments are not those of a typical investor.  Investment decisions are based on whether a particular investment will improve the quality of life of those affected by it, not simply on bottom-line profitability. Profits that are generated are then reinvested in development initiatives. 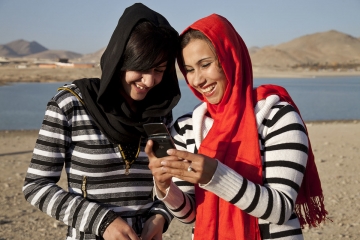 Roshan, an Aga Khan Fund for Economic Development (AKFED) project company and Afghanistan’s leading total communications provider, has nearly six million active subscribers and a network that covers over 240 cities and towns in all of the country’s 34 provinces.
AKDN / Roshan
Infrastructure development

The infrastructure projects, both small and large, include systems for potable water and irrigation; sanitation systems that improve health; roads and bridges that provide access to markets; hydroelectric plants that light homes and provide power for industry; and mobile phone networks that have helped restore national telecommunications.

Today, they are often vital components of the overall quality of life.

In 2003, AKDN and its partners launched Roshan (Telecom Development Company Afghanistan Ltd.).  Today, Roshan is a genuine driver of reconstruction and socio-economic development in Afghanistan.  It has invested over US$600 million in the country since 2003, turning an impediment to progress into a beacon of hope. Not coincidentally, Roshan means “light” or “hope” in Afghanistan’s two national languages.

It has a network covering more than 287 districts and cities across the country’s 34 provinces.  It is also Afghanistan’s single largest private investor and taxpayer, contributing approximately 5 percent of the Afghan Government’s overall revenue.  Roshan directly employs around 650 people and provides indirect employment to over 30,000 people, making it one of the largest private employers in the country.  The Harvard Business School issued a case study on Roshan and Fortune magazine named it to its 2015 list of companies that were “Changing the World”. 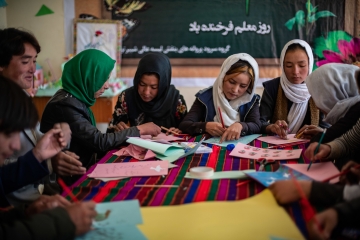 From May 2017 to April 2020, the Aga Khan Foundation and it partners undertook the Improving Adolescents’ Lives in Afghanistan programme to work with over 176,720 adolescents and young adults in the Afghan central highlands, helping them to gain the confidence and skills and opportunities necessary to act as effective agents of change in their communities.
AKF Afghanistan / David Marshall Fox
Employable skills

The University of Central Asia (UCA), in partnership with Badakhshan University, provides training in English, IT, accounting, teacher education and other post-graduate studies.  To date, UCA has engaged nearly 3,500 Afghan youth and adults in vocational and professional development courses.

The Skills Development Programme aims to provide practical, industry-relevant training to unemployed and under-employed youth.  The programme aims to support young people in local communities to improve their knowledge and skills, thereby increasing their employability by preparing them for the competitive labour market. 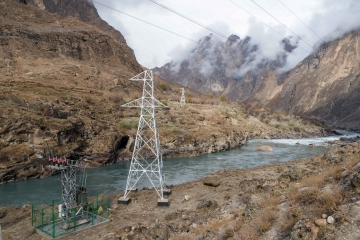 According to the 2008 UN Human Development Report, 1.6 billion people, most of whom live in Africa and South Asia, lack access to electricity resources.  Total global energy demand is expected to double by 2050, and as pressure to reduce emissions in both the developed and developing world increases, access to clean, reliable energy will become not only an issue of technology, but of equity and fairness.

In the quest for sustainable energy sources, remote communities in developing countries pose special challenges.  In the mountainous regions of Central Asia and northern Pakistan, villages are often isolated, and far removed from any functioning electricity grid.

One solution, first pioneered by the Aga Khan Foundation (AKF) in Pakistan, involves digging a narrow channel along a hillside to divert water into a pipe.  The pressure created by the water flowing through the pipe is enough to turn a turbine and produce 20-100kw of power.  These micro-hydroelectric plants generate enough power to light a village or even several communities.

Unlike dams, which may cause adverse effects on ecological systems, these mini-hydroelectric plants merely divert, rather than dam, the water.  Since 2004, the AKF has been building micro-hydro power plants in Afghanistan.  At the same time, the Aga Khan Fund for Economic Development (AKFED) has begun exporting the hydroelectricity generated by the Pamir 1 facility in Tajikistan to tens of thousands of families in northern Afghanistan.  Through eight cross-border energy projects, four percent of Badakhshan Province in Afghanistan (some 35,000 people and over 200 government and commercial entities) has been electrified for the first time. 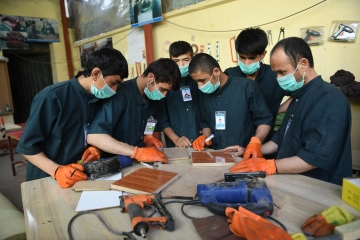 AKDN's work to create viable enterprises in both small villages and big cities in Afghanistan, include training in construction, service, beekeeping, handicrafts and agriculture. Some 75% of the trainees have found jobs or started their own businesses.
AKDN / Farzana Wahidy
Enterprise development

AKDN seeks to create economically sound and viable enterprises, both in small or remote villages and in big cities.  Its programmes have worked across the spectrum, both for the benefit of poultry farmers in Afghanistan and the creation of large-scale hydroelectric plants in Uganda that provide half the nation’s electricity.

It is guided by its own experience in husbanding companies and institutions, which have now grown into large institutions, taking their place on the stock exchanges of developing countries.  Many of those large institutions began as entities that were run by a few people.  AKDN also works to build many of the characteristics of healthy, robust economies, including employable skills, support for small and medium sized companies and savings and credit programmes that increase financial inclusion, among others.

The Aga Khan Foundation (AKF), for example, works not only to bring prosperity to a region, but it also puts into place the means to do so, building roads, bridges and markets.  Its “Accelerate Prosperity” programme promotes entrepreneurship, placing emphasis on women and youth entrepreneurship, and the growth of start-up and early stage businesses.  It also focuses on skills development in vocational and technical trades.

The Aga Khan Agency for Microfinance (AKAM) supports these efforts by providing finance to, among other things, entrepreneurs and small and medium-sized companies.  Its ultimate aim, of course, is to support entrepreneurs create the means for expanding their businesses and becoming a part of the productive infrastructure of a nation.

The Aga Khan Fund for Economic Development, which works with other AKDN agencies and  often collaborates with local and international development partners, works to create and operate companies that provide goods and services essential to economic development.  These range from banking to electric power, agricultural processing, hotels, airlines and telecommunications.  AKFED takes a long-term view in order to build viable, self-sustaining and profitable companies.

The Kabul Serena Hotel, another significant investment, was inaugurated in 2005, the first five-star hotel to open in Afghanistan in more than 35 years.  The hotel, representing a US$39 million commitment, was built at the request of the Afghan Government to provide accommodation of an international standard for diplomats, investors and other travellers visiting the country.  The hotel aims to aid the revival and development of central Kabul, and to help revive the crucial hospitality and tourism industries in Afghanistan.  It directly employs nearly 400 people, bolstering the economy through the sourcing of materials from local producers, craftsmen and artists.

Through investments in Habib Bank, AKDN is making financial services available to Afghanistan’s entrepreneurs and burgeoning private sector.  The Habib Bank has been able to draw on its experience in 26 countries to help update Afghanistan’s banking laws and regulations and to build capacity within the industry.

In all of these approaches, there is an emphasis on the development of local human resources over time, whether in remote and impoverished villages or in major cities in the developing world. 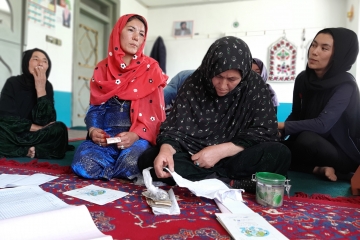 In Afghanistan, to date the Aga Khan Foundation has supported over 4,000 community-based savings groups (CBSGs) to facilitate access to financial services for remote and marginalised communities.  CBSGs provide a secure, convenient place to save and take small loans on flexible terms, helping poor rural households to smooth erratic incomes and cope with emergencies.

About 40 % of these groups have graduated and no longer require support.  Women constitute over 70% of the total membership (56,430 members).  The groups’ cumulative savings to date is US$ 2.8 million.  Building on this success, since 2016 the Foundation has been federating these groups into cluster CBSGs to achieve community development projects at larger scale.
icon