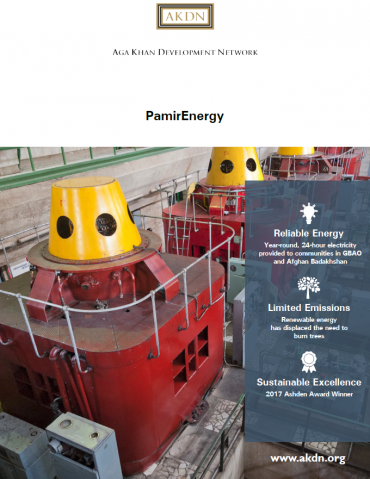 Following the collapse of the Soviet Union in 1991 and a five-year civil war, Tajikistan’s electrical infrastructure was in need of significant investment. Among the most affected areas was the Gorno-Badakhshan Autonomous Oblast (GBAO), where economic and human development was stifled during the cold winter months as a result of a lack of electricity for heating and the consequent closure of schools, health centres and businesses.

Many of the region’s 220,000 residents resorted to wood fuel for their heating and cooking needs during the winter, resulting in the decimation of 70 percent of the region’s forests within a decade and a sharp increase in respiratory disorders due to smoke inhalation.

To address the situation, in 2002, the Aga Khan Fund for Economic Development (AKFED), in partnership with the Government of Tajikistan and the International Finance Corporation, formed PamirEnergy. Since then, the company has repaired the electrical infrastructure of GBAO, expanded hydroelectric capacity and transmitted surplus energy from Tajikistan to Afghanistan.