In 2004, the Historic Cities Programme began restoring the Great Mosque in Mopti, Mali. The restoration expanded to include sanitation, street paving, healthcare and other measures in the neighbouring Komoguel district. Since 2006, the Programme has extended its work to Timbuktu, where it has restored the Djingarey Ber mosque, and to Djenné, where it has also started restoration on the Great Mosque. The programmes in each town are expected to expand into adjacent quarters. 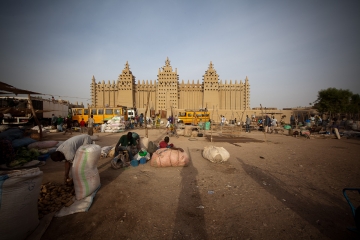 By about 300 A.D., camel caravan routes had been established throughout West Africa, linking West African cities with Europe and the Middle East.  Timbuktu, Gao and Djenné – all major cities along the West African routes – became important cultural, as well as trading, centres. In major cities, schools and universities were endowed and vast libraries were built.

This important legacy had been in decline for many years.  Beginning in 2004, under a public-private partnership, the Aga Khan Trust for Culture (AKTC) began working to revitalise the centres of three cities in Mali.  AKTC started with the restoration of the Great Mosques of Djenné and Mopti and the Djingereyber Mosque in Timbuktu, as well as the public spaces around them.

The mosque restorations became the most visible part of a multidisciplinary programme aimed at improving the quality of life in the cities.  These efforts included the installation of new water and sanitation systems, street paving, early childhood education, training, health care and economic development.

Following the completion of the restoration of the Great Mosque of Mopti in 2006, the Trust implemented an urban regeneration programme that aimed to raise the standard of living for residents in the Komoguel area.

Several public water points were established to increase access to safe, clean drinking water; an underground sewerage system was built with connections to individual households in the area; a treatment facility for raw sewage was installed; 4,000 square metres of streets were paved with locally manufactured bricks (made from recycled polythene bags and sand) and a system for collection of solid waste was introduced.  A flood barrier built to withstand periodic flooding was constructed.

A visitor centre housing the Centre for Earthen Architecture, a community centre and public toilets were also constructed.  In the process, 345 people were trained in construction techniques, plumbing, masonry, brick manufacturing, carpentry and metal work. 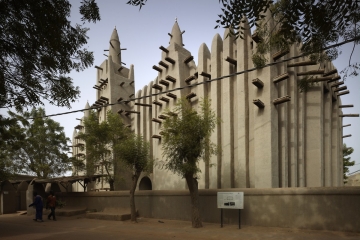 The Mosque, which was officially listed as part of the country’s cultural heritage in 2005, is an imposing earthen structure built in the traditional Sudanese style between 1936 and 1943 on the site of an earlier mosque dating from 1908.

The restoration work comprised a number of different phases: the complete reconstruction of the roof; stabilisation of the upper part of the building which had been damaged by the inappropriate use of cement in a previous restoration effort in 1978; repairing the earthen brickwork, removing damaged sections and rebuilding them with traditional earthen bricks; applying a traditional coating made by mixing earth with rice husks - called banco pourri - to the external walls; replacing the earth bricks along the building facades; rebuilding the parapet and the pinnacles of the terrace; removing and partly renovating the outer earthen coatings, which were in a state of disrepair; renovating the outer courtyard.  Plumbing was installed in the courtyard along with a fountain for worshippers’ use.

The interior of the Mosque has also been substantially improved: the floor has been completely rehabilitated; renovation work on the staircase has made it easy to access the terrace; new public address, lighting, ventilation and electrical systems have been installed.  The Mosque was also been given new doors made of high-quality seasoned wood.

This restoration work was undertaken in conjunction with the National Cultural Heritage Department of Mali’s Ministry of Culture, regional authorities, the city of Mopti and the Mosque’s committee.  The local authorities also helped with the selection of experienced bricklayers, as well as young apprentices who were trained in construction and restoration techniques during the project.  This restoration work was, among other projects, a part of a Memorandum of Cooperation signed with Mali’s Ministry of Culture, relating to the conservation of Mali’s earthen architecture.

But at the same time, an Agreement of Cooperation broadened the work to include to health, education, rural development, civil society and economic development.  These programmes include the improvement of environmental health through water and sanitation and other measures to reduce the incidence of water-borne diseases (see Social Development for details).

A visitor centre designed to be part of the tourism infrastructure is also being built. 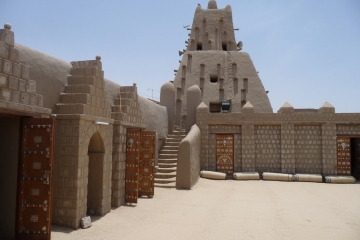 Following the work in Mopti, the Aga Khan Trust for Culture (AKTC) initiated comprehensive conservation works on the Djingereyber Mosque in Timbuktu at the end of 2006.  The mosque, built in the 14th century, is the oldest earth construction building in sub-Saharan Africa.  Officially listed as part of the Mali’s cultural heritage, it was designated a World Heritage Site by UNESCO in 1988.

Because the Mosque is constantly subject to the depredations of a harsh, arid climate, AKTC worked to reverse the deterioration of this important landmark and to develop existing technical capabilities through training.  The project included: conservation of the building’s roof, minaret and exterior facades; conservation of the building’s interior prayer space, with improvement of the existing electrical, ventilation and sound systems; on-the-job training of local craftsmen and apprentices in traditional earth building techniques and in new restoration methods; and, technical assistance to local authorities for the post-construction phase.
icon 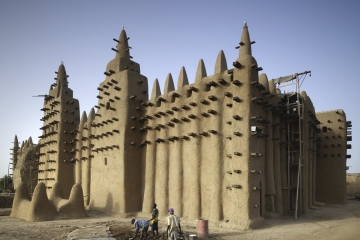 Djenné, founded by merchants in the ninth century (near the site of an older city dating back to 250 B.C.) is the oldest known city in sub-Saharan Africa.  Its historic centre, where more than 2,000 traditional houses have survived, was also designated a World Heritage Site by UNESCO.

The Aga Khan Trust for Culture (AKTC)’s work in Djenné began in 2006, when a preliminary study of the Great Mosque revealed that despite its well-known annual maintenance process, the Great Mosque of Djenné was at risk of collapsing.  In an attempt to make the mosque structure watertight, each year more “banco” – a mix of mud and rice chaff – was placed on the walls and on the roof.   Over 500 tonnes of this “banco” mix was overloading the roof and hundreds of tons of it were stressing the wall structure.  AKTC’s conservation of the Mosque, which began at the end of 2008, encompassed the complete rehabilitation of the roof, restoration of the mud-brick load-bearing wall structure and the complete replacement of the interior lighting, ventilation and sound systems.

In reversing the deterioration of this important landmark, AKTC has been working with the local corporation of masons, the “barey-ton”, to revive traditional construction techniques and develop technical capabilities through training.  As in Mopti, Phase 2 will encompass the improvement of public spaces, the installation of water and sanitation and other measures designed to improve the quality of life in the area. 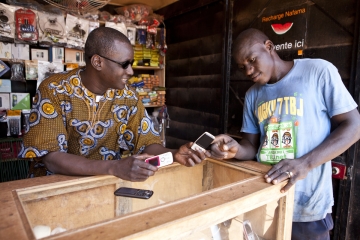