Première Agence de Microfinance Côte d’Ivoire (PAMF-CI) was established in 2008 in Boundiali and opened a second branch in Korhogo in the following year. With commercial banks focusing primarily on companies, large parts of the population are dependent on microfinance. The sector is dominated by cooperatives or mutual institutions, operating essentially in urban areas in the south and eastern part of the country; yet in recent years MFIs have started to explore opportunities in rural areas. The rural regions are of great importance to the economic and social development of the country as its resources are mostly linked to the agriculture sector, which represents nearly 18% percent of the national GDP and employs roughly two-thirds of the population.

Côte d'Ivoire, with a US$ 35.5 billion GDP in 2016, is a lower middle-income country. West Africa’s second-largest economy is driven by the production of cocoa and cashews, and other food-crop cultivation and cotton. After years of civil war, political stability has returned, which has led to the African Development Bank reopening its headquarters in Abidjan, reinforcing expectations of the economic recovery that started in 201. Located on the coast, the country benefits from a climate favourable for agricultural production. Simultaneously, industrial production is also growing as major public infrastructure projects are implemented.

AKDN is present in the large economic and social structures of the country. It operates Azito Power, a US$ 615 million investment and the largest private sector power plant in Sub-Saharan Africa, which provides more than 25 percent of Côte d'Ivoire's electricity generation capacity. It is also an investor in Ivoire Coton. Unlike most MFIs, PAMF-CI has a strong rural focus and the agency extends loans primarily intended to improve agricultural productivity, acquire livestock, and, diversifying its portfolio, assist in establishing small enterprises in rural and urban areas. In spite of political insecurity, PAMF-CI is one of the few microfinance institutions to remain operational in the rural areas of the north. In the past few years, PAMF-CI has achieved strong annual growth in deposits, following its strategy of building a solid deposit base, with 40 percent of borrowers also being savers, to fuel its activities.

PAMF-CI has also sought to balance its loan portfolio with nearly 50 percent rural and 50 percent urban loans, allowing it to thrive along with the continuing economic growth of the country that is largely in urban areas while staying true to its social mission. Women have grown to constitute more than a third of PAMF-CI’s borrowers. PAMF-CI’s longstanding and very successful group-lending programme remains one of the most popular forms of obtaining credit and has provided a loyal customer base. Loans are primarily extended in order to improve agricultural productivity, acquire livestock, diversifying products, and as aid to establish small enterprises in rural and urban areas. Group loans offer both customers and PAMF a more secure loan scheme, as loans can be repaid after the output of the final product. PAMF-CI also collaborates with Ivoire Coton, an AKFED company. In its efforts to extend its reach and facilitate current clients’ access to financial services, PAMF-CI has carried out in-depth market research on mobile banking, and will focus on providing digital financial services as part of its objectives for 2018. 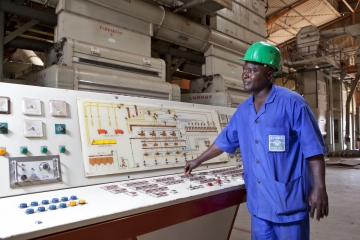