Many of the methods developed for creating and maintaining a strong civil society were pioneered in Pakistan, not least the village organizations first created under the Aga Khan Rural Support Programme (AKRSP).  More recently, AKDN’s Civil Society programme has been working to help civil society organisations - broadly defined - to become more efficient and effective. 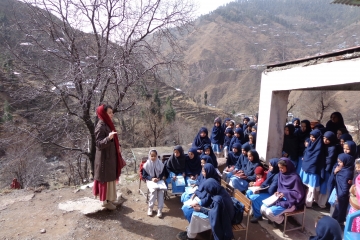 In northern Pakistan, AKAH undertakes disaster awareness training sessions in schools to familiarise students with hazards that could arise in the event of a natural disaster.
AKDN / AKAH
Civil society strengthening

In Pakistan, the programme has several components: 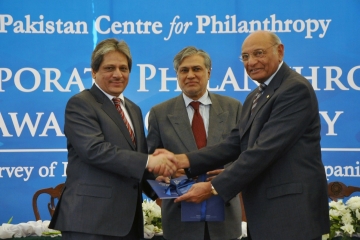 Corporate Philanthropy Survey Launch.
Pakistan Centre for Philanthropy
Pakistan Centre for Philanthropy
The Pakistan Centre for Philanthropy (PCP), which was launched from research conducted by AKF in 2000, and following the Conference on Indigenous Philanthropy, (held in Islamabad on 21 October 2000) was created to focus on indigenous philanthropy.  The research showed that indigenous philanthropic activity generated up to five times the amount of money as foreign aid. But many government officials and ordinary Pakistanis looked at CSOs and wondered if they were effective.
To address these concerns, the Aga Khan Foundation (AKF) set up an NGO Certification Programme within the PCP that brought together distinguished and experienced people drawn from civil society, business and the Government. A rigorous review process leads to certification if a CSO maintains required levels in three areas: Internal Governance, Financial Management and Programme Delivery.
In 2005, the World Bank pointed to the PCP as a model: “The Pakistan Centre for Philanthropy’s non-profit organisations certification programme is the first of its kind in the South Asia Region, although it is based on similar initiatives elsewhere, particularly one in the Philippines. The objective is to help non-profit organisations diversify their resource base and expand their programmes while at the same time demonstrating their commitment to best practices in governance and management."
Certification is a “seal of good housekeeping” for organisations that meet defined standards of organisational effectiveness based on an independent evaluation of their governance, financial management and programme delivery. PCP staff spend two to three weeks reviewing an NGO’s documents and examining its operations before deciding whether or not to recommend the NGO to the certification panel that is made up of a majority of private sector representatives along with two government officials.
The process is voluntary and does not come under the control of any government ministry, and organisations that do not qualify the first time, but would like to try again are offered help to create and implement an improvement plan.
“Certification is recognised by the authorities, and NGOs that are certified also obtain not-for-profit tax-exempt status from the Central Board of Revenue, something that must be renewed every second year. While the certification process is primarily aimed at improving NGO performance and transparency so that donors can better judge which NGOs are reliable, it has the added effect of heightening the credibility of NGOs in general and thus improving the reputation of the NGO sector. Although the process only began in 2005 and is entirely voluntary, it has already attracted the better NGOs as no one wants to be left behind.”
icon 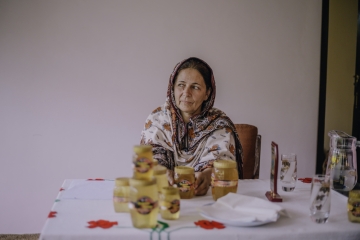