The Aga Khan Agency for Habitat (AKAH) - formerly Focus Humanitarian Assistance - began its operations in India in 2002.  It started with emergency response, relief and recovery, which have quickly become priority areas.  In India, AKAH has responded to major disasters across the country, and implements various disaster risk reduction activities to strengthen the capacity of local communities to prepare for and respond to disasters.  An effective response strategy ensures the timely deployment of resources, including relief items, through AKAH’s network of volunteers.

Emergency Management teams trained by AKAH aim to build resilience against disaster events and build the capacity of community members in Disaster Risk Reduction (DRR) and Community-Based Disaster Risk Management (CBDRM).  The project also works to improve risk anticipation through the establishment of an Early Warning System (EWS).  AKAH has so far trained tens of thousands of volunteers for disaster response and management across Central and South Asia, and many more in the other countries in which it works. 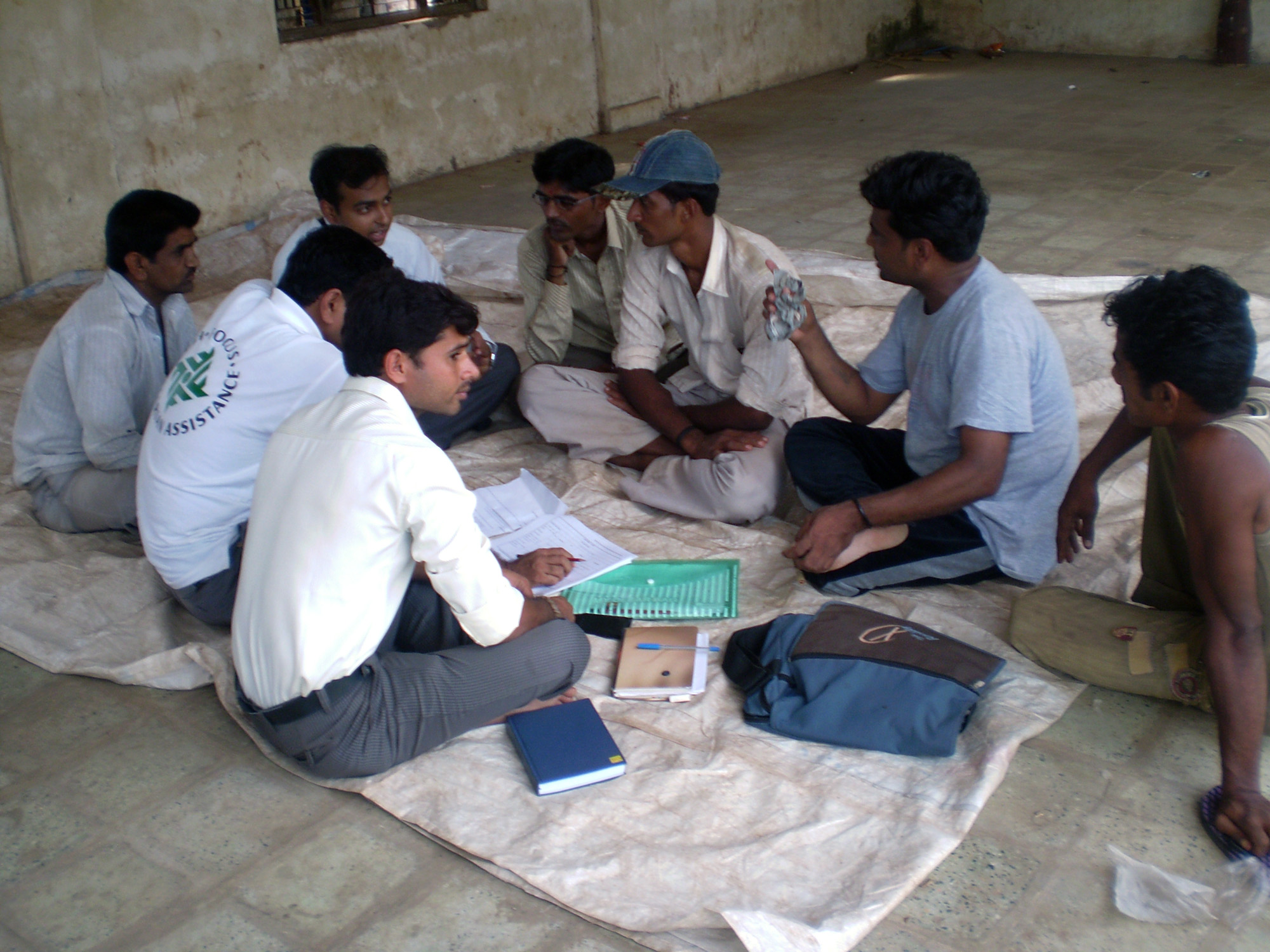 Disaster management plans: AKAH India facilitates the development of crisis management plans at the local and regional level that cater specifically to vulnerable communities.  The plans are prepared by the community and integrate critical prevention, mitigation, preparedness, and response elements.  AKAH India has developed its own Geographic Information System (GIS) that helps capture, manipulate, store, analyse, manage, and present all types of geographical data for disaster management.  Through its Family Disaster Management Plan (FDMP) project, AKAH has also increased awareness about hazards and vulnerability at the family level and assisted in the development of personalised family disaster management plans.

Awareness programmes on Disaster Risk Reduction: The Disaster Awareness Programme aims to educate the local communities on the contents of their crisis management plans as they take into account risk and response measures.  The ‘Safe You Safe Me’ campaign, launched in 2013, is another initiative that aims to generate awareness on disaster preparedness and build community resilience.  The campaign toolkit comprises of materials such as placards, posters, films, handouts and flipcharts that deliver key messages related to earthquakes, fires, floods and cyclones. 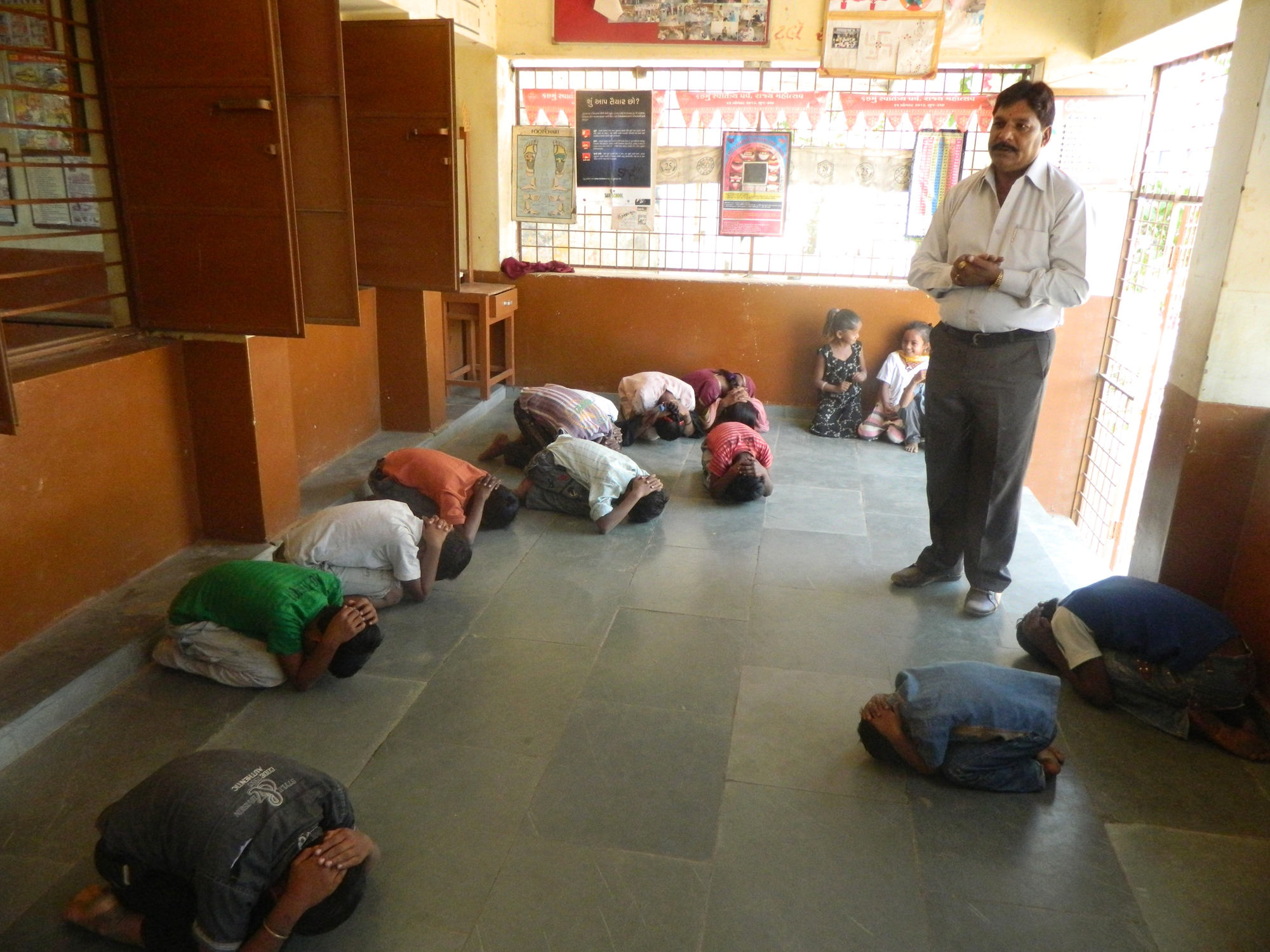 The drill at Pithornagar Primary School. The ShakeOut earthquake drill is practised at hundreds of schools to enable children in India and globally to learn how to protect themselves. School children also share their learnings with their friends and family.
Copyright:
AKDN

Safety drills: Fire evacuation drills have helped establish safe and systematic evacuations in case of a fire along with an evacuation plan that was developed in close coordination with local leaders.  Every year, AKAH India participates in the AKDN ShakeOut, a global annual earthquake drill that educates people on how to protect themselves in the event of an earthquake.

School and hostel safety programmes: In light of the United Nations Millennium Development Goal (MDG) 2 and Priority 3 of the Hyogo Framework (2005 to 2015) to use knowledge, education and innovation to build a culture of safety at all levels, AKAH India reached out to children with comprehensive school and hostel safety programmes.  Stakeholders from different levels of management and students were enlisted to put in place a system supplemented by trainings that built basic capacity to deal with various crises on the school premises.  A scientific risk model was developed that used well-defined indicators to calculate risk scores for each school before and after the project.  A stockpile of supplies was also set up in most of the project schools. 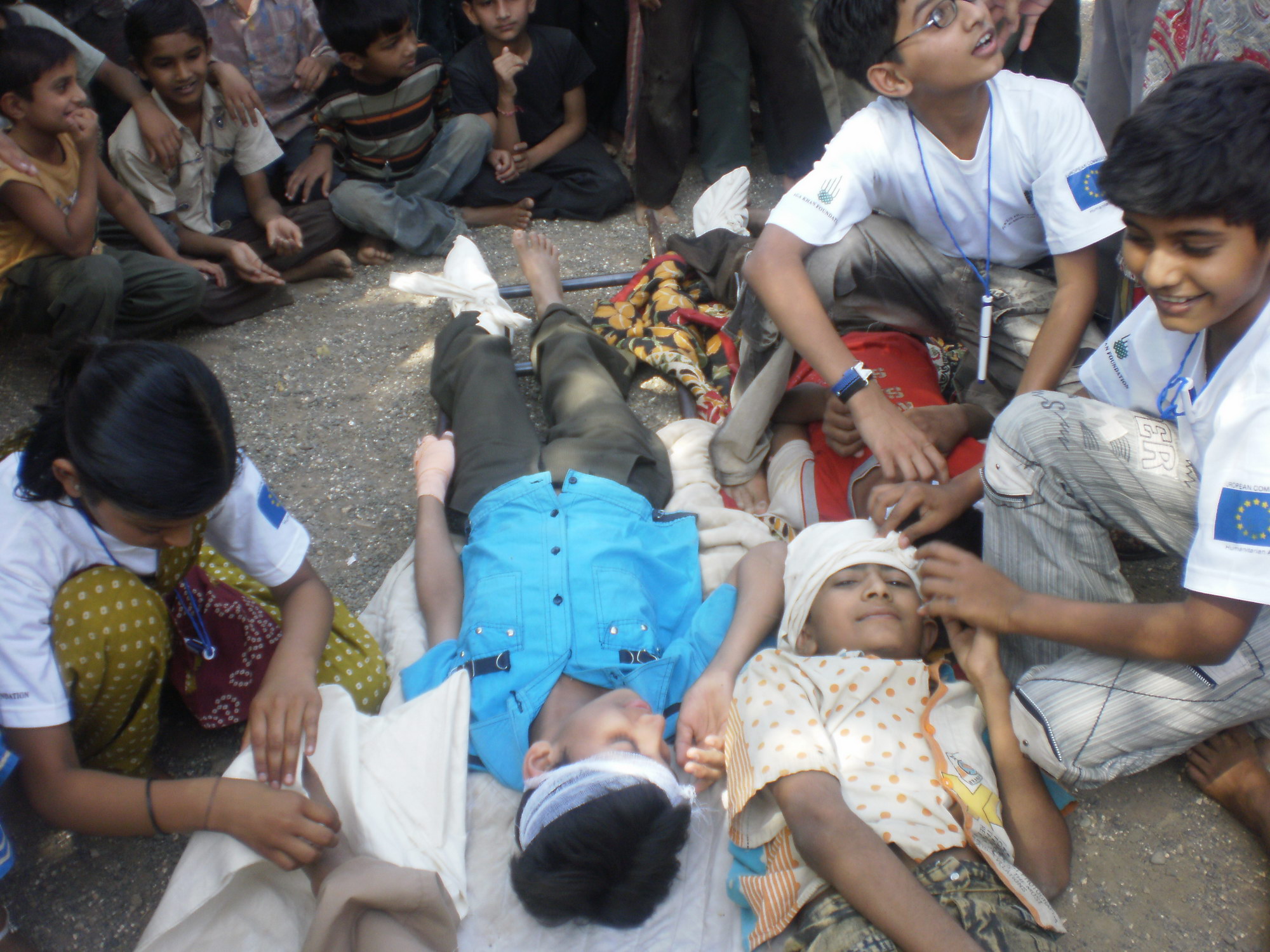 The DIPECHO School Safety Programme.
In 2007, under the Disaster Preparedness Programme of the European Commission for Humanitarian Assistance (DIPECHO I), AKAH India supported by the Aga Khan Foundation (UK) implemented a 15-month project to enhance the disaster resilience of communities through school safety.  The project covered 25 private schools.  A baseline survey showed that these schools had the highest degree of risk to disasters due to their location.  School safety trainings covered emergency drills, establishing emergency task force teams, the production of teacher and student disaster preparedness materials, and training in first aid and fire safety.  AKAH India developed a school disaster preparedness module at the end of the project, which has been revised and refined based on field experience to form a model that can be replicated across other disaster-prone states.

Between 2009 and 2010, AKAH India implemented DIPECHO II in 18 villages of Gujarat.  The primary objective of this project was to strengthen the capacity of rural communities in Gujarat, and to enable them to be better prepared, mitigate and respond to natural disasters thus reducing their vulnerability through the implementation of sustainable disaster risk initiatives.  It also covered school safety in 12 private schools, aimed at schoolchildren, teachers and school administration.  Following the success of the DIPECHO I and II projects in Gujarat, AKAH has replicated the School Safety Programme in Baramulla District as a part of the Kashmir Rehabilitation Programme.  In all projects, AKAH takes into account the cultural nuances of the areas in which it works.  This approach has enabled the school safety project to be a model for the Kashmir Rehabilitation Programme.

Stockpiles: Emergency stockpiles of essential relief items have been set up by AKAH India, which can be mobilised in the event of a disaster.

Civil society collaboration: AKAH India partners with like-minded organisations to provide expert knowledge and quality resources to a range of projects and to build capacity to respond to disasters. 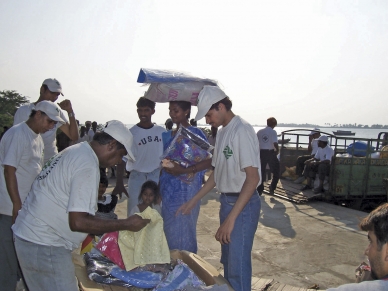 Over the years, AKAH India has responded to a range of incidents including floods, cyclones, earthquakes, and a tsunami amongst other emergencies.  Some of the significant response activities include: 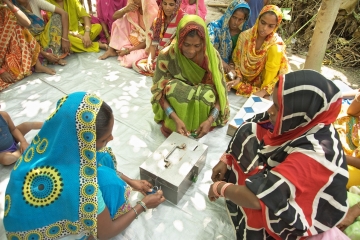