Understanding that improving the quality of life of the poorest and most marginalised communities starts at home, the Aga Khan Agency for Habitat (AKAH), the Aga Khan Foundation (AKF) and the Aga Khan Rural Support Programme (AKRSP) in India have focused on supporting communities to improve their built habitat.  In addition, AKAH identifies interventions that strengthen the resilience of communities and local and national governments to disasters; reduces their vulnerability to risk; and increases their capacity to help their neighbours. 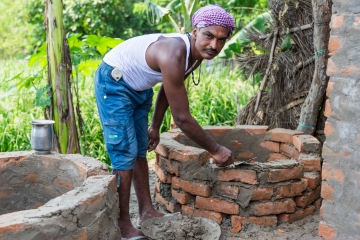 Since 1970, the Aga Khan Agency for Habitat (AKAH) has been working to improve the built environment, particularly by facilitating quality housing design and construction, village planning, mitigation of natural disasters through the construction of earthquake-resistance structures, environmental sanitation, water supplies and other factors that contribute to an improvement in the quality of life.

Working in select regions in the states of Gujarat, Maharashtra and Telangana, AKAH designs and promotes improvements to low-cost housing and physical infrastructure.  AKAH also provides material and technical expertise, training, as well as construction management services in rural and urban areas in collaboration with other AKDN agencies.

Working towards a similar purpose but with a particular focus on rural areas, the Aga Khan Foundation (AKF) and the Aga Khan Rural Support Programme (AKRSP) have been working to improve access to drinking water in the states of Bihar and Gujarat while household toilet construction has been promoted in Bihar, Gujarat and Madhya Pradesh.  In Gujarat and Madhya Pradesh rainwater harvesting is also being promoted to help communities access and store water.

Key to the AKDN’s approach is community participation and involvement in improving the habitat to ensure the sustainability and ownership of the new infrastructure and its management.  Promotion of Village Development Committees (VDCs) in rural areas that are representative of the community including women and marginalised sections (a VDC must be comprised of at least 30% women) is carried out and to ensure plans are aligned with the government, 15% of the committees are Panchayat (local government body) members as well.

In resource poor and environmentally vulnerable areas prone to natural disasters and droughts, people and the environment are often trapped together in a downward spiral manifested by low-income levels, lack of basic shelter and sanitation infrastructure, limited access to poor quality health and education services, and insufficient access to clean drinking water.  Through programmes focused on housing design and construction, village planning, management of natural hazards, sanitation and water supply the AKDN seeks to help communities live with dignity and support the government with the implementation of their programmes focused on rural and urban settlements. 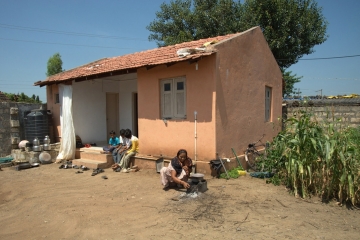 With the support of the Aga Khan Planning and Building Services, Focus Humanitarian Assistance and DIPECHO, this earthquake resistant house – made of chemically treated bamboo for extra durability – was built as a demonstration for villagers so that they can proceed to build their own homes in the same fashion. Materials are made accessible and affordable to all 18 villages in Chitravad, Gujarat, India.
AKDN / Jean-Luc Ray
Basic shelter

In resource-poor and environmentally degraded areas prone to natural disasters and droughts, people and the environment are often trapped together in a downward spiral manifested by low-income levels, lack of basic shelter and sanitation infrastructure, limited access to poor quality health and education services, and insufficient access to clean drinking water.  New infrastructure and programmes can rarely keep up with population growth.

The AKDN believes that “adequate shelter" means more than just a roof over one’s head. It includes access to basic urban services, environmental management and equitable access to land and credit. In urban areas, it provides technical advice on design, construction and financing to cooperative housing units.  Community involvement helps increase local capabilities in building and management.  All AKDN agencies work together to ensure that these considerations are taken into account in rural areas, at the village level, in mapping and in planning activities.  All projects are carefully evaluated for financial sustainability.
icon 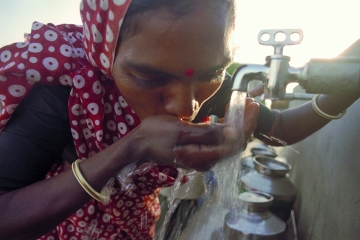 Water and sanitation problems debilitate and kill in large numbers, limiting economic growth, educational access, and life opportunities.  In India, water-borne diseases due to the lack of safe drinking water and sanitation remain the single largest contributor to under-5 child mortality.  According to recent estimates about 1.5 million children under five die each year from water-borne diseases, primarily diarrhoea.

The country also loses over an estimated 200 million workdays annually due to these diseases.  In western India, water scarcity is now the single biggest threat to livelihoods, as falling groundwater levels and shrinking rivers make less water available for agriculture and for domestic drinking purposes.

In rural areas women are spending increasing amounts of time and energy travelling long distances to get water.  Studies have revealed that women in the drought-prone regions of Gujarat and the flood-affected areas of Uttar Pradesh walk on average six kilometres each day to fetch water.

Besides availability, water quality is another issue.  Near the coast, salinity ingress is another major impediment to the drinking water quality.  Studies indicate that dental and skeletal fluorosis, kidney and gall bladder stones, gastro-intestinal problems and skin disease are common ailments that afflict the young and old alike.  Women of reproductive age and children are particularly vulnerable.

The challenges of safe sanitation are also considerable in India.  Currently, only 31% of people living in rural India are covered by safe sanitation facilities and with increased urbanisation, city infrastructures are not able to provide sanitation for poor urban-dwellers.  The lack of adequate toilet facilities affects in particular the health and security of women and girls.  Lack of toilets is one of the biggest reasons for high school drop-out rates amongst girls.

In order to help the government address these challenges AKAH, AKF and AKRSP have been working with communities to facilitate the construction of safe sanitation facilities as well as support the adoption of improved hygiene behaviours. 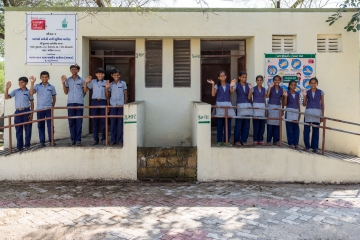 A key objective of the AKDN Comprehensive Sanitation Initiative is to ensure 100% sanitation coverage across all households by implementing a comprehensive behaviour change communication campaign to create a demand for safe sanitation behaviour; providing financial and programmatic support for the identification and adoption of innovative and scalable toilet technology and design options (for individual, school and community toilets) as well as developing systems for waste management and village cleanliness.  In addition, the Initiative will work closely with state governments to streamline subsidy disbursal as well as with panchayats (local government institutions) to work collectively to achieve open defecation free status.  Training of local masons on construction of low-cost, high-quality sanitation facilities as well as capacity building of government front line health-workers are key components of the Initiative as well.

The AKDN Comprehensive Sanitation Initiative is working in coordination and partnership with the state government, civil society groups and the private sector. 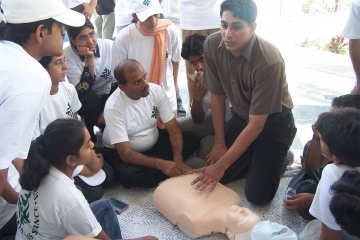 India is prone to a range of natural disasters including earthquakes, flooding, cyclones, avalanches, landslides, wildfires and hurricanes.  AKAH is implementing various disaster risk reduction activities to strengthen the capacity of local communities to prepare for and respond to such disasters.

These villages are particularly vulnerable to a range of hazards and are considered to be prone to earthquakes (Zone 5) and cyclones as per India’s National Disaster Management Authority.  These villages are extremely remote and have limited immediate access to basic emergency services particularly during times of disaster.

The project interventions build the capacity of local volunteers to become first responders during a crisis situation through training which includes first aid, CPR (cardiopulmonary resuscitation) and fire safety.

In addition, disaster preparedness programmes are conducted at the community level, such as puppet shows for children who are then able to reinforce these messages with their families.

Hazard vulnerability risk assessments and the development of Village Disaster Management Plans are also components of the project.  As of end of 2016, this project reached 8,500 beneficiaries in Kutch, to enable them to effectively respond and reduce their vulnerability towards potential hazards. 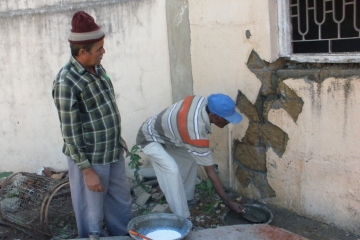 Masons were trained in skills to building roofs that can withstand high wind speeds and repair structural cracks in walls and roofs.
FOCUS
Mitigating the effects of disasters

Focus Humanitarian Assistance and the Aga Khan Planning and Building Service in India merged undere AKAH, with support from the European Commission, to undertake various initiatives to help local communities to mitigate the risk of disaster by improving the physical structures around them.

This involved training local masons in important skills related to building structures in cyclone and earthquake-prone areas.  The training included building roofs that can withstand high wind speeds, repairing structural cracks in walls and roofs, reinforcing buildings vertically and horizontally through the usage of cement safety belts across both planes, as well as other techniques.

The aim of this project was to generate awareness about structural safety practices and build local capacity.  The Ramrechi Primary School was selected for seismic resistant retrofitting under this project.  A structural hazard assessment of the school was conducted and recommendations for retrofitting was given to the school management board.  Staff members met with the school officials and locals to discuss the extent of the damage prior to retrofitting.  A local mason, trained under the project, was involved in the repair of the terrace, sealing cracks in the walls, adding vertical and horizontal reinforcements and cement bands across the building.  In addition, Rapid Visual Assessment to identify structurally weak buildings was conducted for 99 such public structures. 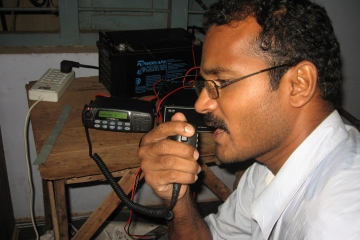 In August 2009, the Aga Khan Agency for Habitat in India completed its three-year Andhra Pradesh Relief to Development Project which stemmed from the devastating South Asian tsunami of December 2004 that claimed close to 200,000 lives and wiped out homes, livelihoods and infrastructure.

At the core of the project’s disaster management and mitigation strategy was the creation of community-based organisations that employed an inclusive, participatory approach to sustainable solutions.  These organisations were critical in shaping and implementing initiatives that would best serve the needs of the affected communities.

Several AKDN agencies, including the Aga Khan Agency for Habitat, the Aga Khan Planning and Building Services and Aga Khan Foundation, collaborated on this project, each bringing expertise and experience to bear on the challenges of working in a remote and resource-challenged area.

The positive impact of activities implemented during the project became evident in the community’s response to torrential rains that caused flooding in October 2009.  The newly trained community emergency response teams and community-based organisations were activated.  Local communities were able to use the new skills and knowledge they had acquired through the trainings and interventions.  A decrease in the community’s vulnerability was also observed, owing to the infrastructure developed by the project such as, cyclone shelters, early warning systems, village-based stockpiles and the 5.75-km evacuation road.  The two-way, early-warning radio system, for example, was used to create awareness of the disaster in the surrounding villages.  Stockpile items amassed during the project, including life jackets, life buoys, tents and community cooking containers, were used to aid displaced families.

In addition, AKAH’ Disaster Assessment and Response Team (DART) was deployed to conduct an assessment drill of the affected area.  The drill provided an opportunity for the DART to gain hands-on experience in conducting assessments as well as provide AKAH with an evaluation of the impact of the project.  Following the assessment of the area, the DART developed an Emergency Response plan for the affected villages in the Krishna District, which has been passed onto local organisations for implementation. 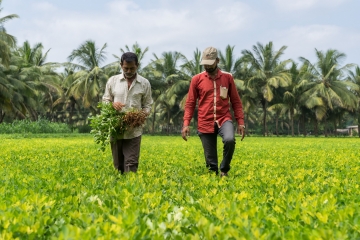