At Hazrat Nizamuddin Basti, the project combines conservation with a major socioeconomic development effort that is implemented through a community-centred, collaborative approach.  The objective is to improve environmental conditions and strengthen essential urban services with interventions in core areas of education, health and sanitation. All programmes commenced following a quality of life assessment study.

Education
Initiatives in education follow a life cycle approach: the early childhood care and development programme aims to facilitate the holistic development of children and facilitate their transition to school.  The major effort towards primary education improvement has included a refurbishment of the Municipal Corporation of Delhi (MCD) Primary school, introducing arts education, greater parent interaction and improved school management. Significant learning support is being provided to senior students.  Life Skills education is offered to all project beneficiaries.  The Vocational Training programmes for young people include a career development centre (NIIT Institute of Technology) and the teaching of the English language (British Council) as a skill needed for employment.
Health
The health interventions in the Basti include upgrading the MCD Polyclinic to ensure better diagnosis and treatment, reduce referrals and build the capacity of a community health outreach team for preventive health care.  A Pathology Laboratory has been set up; over 11,500 tests have been conducted on 3,675 patients. The initiative has included additional specialist consultations in gynaecology, ENT and Eye care.
Urban Improvements
In 2009, a physical mapping/survey of the Basti was undertaken to document the area with the intention of planning sensitive urban improvements.  The survey has led to the preparation of street improvement plans which will be implemented by the Municipal Corporation of Delhi.  The parks along the western edge of the basti will be landscaped to fulfil the needs expressed by the resident community.  There will be earmarked parks for women, children, cricket, community functions and weddings. The newly built public toilets - a key intervention for urban renewal in the basti - have improved access to hygienic sanitation for the residents.  They are now community managed.
Cultural Revival Initiative
The “living culture” of the area is a unique blend of secular and inter-faith elements that encompass performing arts, classical music, poetry and traditional crafts.  Steps are being taken to revive and revitalise these components by making them viable in a contemporary milieu.  This is also where Amir Khusrau started Qawwali music traditions in the thirteenth century.  His legacy is being highlighted at festivals, discussions and through recordings.  Efforts are also underway to build awareness of the value of the monuments through activities like theatre, craft workshops and heritage walks.  Women tutored in the traditional craft of paper cutting now augment family incomes with sales of their products. 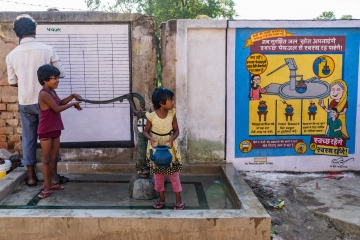