The creation of parks and gardens has been an important part of AKDN's work in several rapidly urbanising cities in the developing world, including Cairo, Bamako, Kabul and Delhi.

In appreciation of Canada's exemplary support for development programmes in these countries, the AKDN has presented several parks and gardens as gifts to Canadian cities — in Toronto and Edmonton — in the hope that they will enhance the quality of life for residents and visitors alike.

The 4.8 hectare Mughal-inspired Aga Khan Garden in Edmonton, Alberta, which was made possible by a CAD 25-million gift from His Highness the Aga Khan, is a modern interpretation of historic Islamic landscape architecture designed for the Edmonton region’s climate and topography.  The Aga Khan Garden is the northernmost Islamic garden in the world.

The Garden features secluded forest paths, granite and limestone terraces, still pools that reflect the prairie sky and a waterfall that tumbles over textured stone.  Fruit orchards extend around the large Calla Pond, and the garden contains more than 25,000 trees, shrubs, perennials, annuals and wetland plants, selected for fragrance, beauty and the ability to survive Alberta’s harsh climate.  The Garden is meant to be a space where cultural understanding can flourish.

The addition of the Aga Khan Garden is expected to more than double the number of annual visitors (from 75,000 to 160,000) to the University of Alberta Botanic Garden, benefiting the economy of the entire region.  To ensure a positive experience for the expected influx of visitors, other major upgrades have been made to the University of Alberta Botanic Garden, including parking improvements, a new entry plaza and infrastructure improvements.

Lebanon-based landscape architect Vladimir Djurovic designed the formal gardens of the Aga Khan Park.  Based on a traditional Persian and Mughal chahar bagh (four-part garden), the gardens are given a natural geometry through ordered plantings of serviceberry trees.  They provide a tranquil place for contemplation as well as flexible areas for public programming or private events.

Beyond a perimeter of cedar hedges, the gardens flow seamlessly into a Park whose trees — including Star Magnolia, River Birch, Trembling Aspen, and Weeping Cherry — were chosen for their varied colours and shapes as well as their ability to withstand the Canadian climate.

Shrubs and plants best suited to attract birds and butterflies are also planted throughout the Park, and include Rose Glow Barberry, Chinese Wisteria, and Forsythia bushes.

Before finalising his designs, Djurovic was encouraged by His Highness the Aga Khan to visit traditional gardens around the world, such as the Tomb of Humayun in New Delhi and the Alhambra’s courtyard gardens in Granada.  Djurovic ultimately aimed not to duplicate these historical exemplars but to communicate “more what you feel and smell and hear” there.The Aga Khan Museum, the Ismaili Centre, Toronto, and the Aga Khan Park harmonize spirit, art, and nature in a 21st-century context while maintaining a core connection to the history of Muslim civilisations. 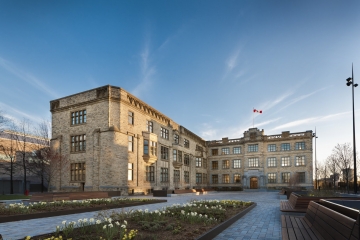