In many cases, these activities are undertaken through partnerships formed with various organisations in the UAE, including Dubai Cares.

One such partnership is the Aga Khan Early Learning Centre (AKELC) Dubai, situated within the Ismaili Centre Dubai. The site of the Ismaili Centre Dubai was a gift of the Ruling Family of Dubai, presented by His Highness Sheikh Mohammed bin Rashid Al Maktoum, Vice President and Prime Minister of the United Arab Emirates and Ruler of Dubai, to His Highness the Aga Khan on the occasion of the Silver Jubilee of his accession to the Imamat in 1982.

The Centre provides nursery, preschool and educational programming based on international standards of excellence.  The Centre’s curriculum demonstrates international best practices and is aligned with the Early Years Foundation Stages framework (EYFS-UK).  The Centre's secular, bilingual (English/Arabic) curriculum, which caters to young children ages 12 months to 4 years,  is offered to members of all communities, reflecting AKDN’s strong belief in the positive value of pluralism and diversity. Recently the AKELC was awarded a 5 star exemplary rating in six critical areas of programme quality, including staff-child interaction, partnerships with parents and the community, learning facilities and health and safety policies. The AKELC Dubai is a part of AKDN's global portfolio of early childhood development initiatives across Africa, South and Central Asia, dating as far back as the early 1900’s.

In addition, the various units of the Aga Khan Trust for Culture regularly hold seminars and other events in the UAE on topics such as architecture and historic city preservation. 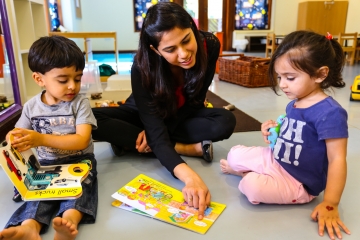