In view of the current conditions in Syria, the Aga Khan Development Network’s (AKDN) efforts are focused on responding to the humanitarian crisis, including emergency health care and food aid. As part of these humanitarian assistance activities, the Aga Khan Trust for Culture is restoring cultural heritage. As in all countries in which it works, AKDN takes a long-term view and remains committed to assisting the peoples of Syria to improve the quality of their lives. 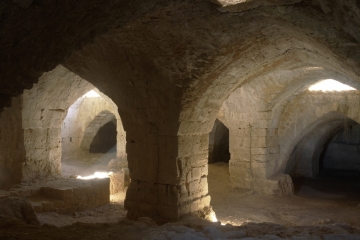 The government approached AKTC for assistance in the restoration of the Salah al Din, Masyaf and Aleppo citadels.  A partnership agreement was signed with the General Directorate of Antiquities and Museums of Syria in 1999.

Consistent with the area development approach AKTC has employed in other cities, including the Historic City of Cairo, AKTC also worked to improve the area around the citadel of Aleppo.  The Aga Khan Agency for Microfinance (AKAM) programme administered loans in several programme areas.

Conservation Standards
In many places around the world, it is thought that imaginative reconstructions of missing parts increased the appeal of the buildings to visitors.  This, however, threatens the authenticity of historic sites.

In the Trust’s projects, reconstruction of missing elements was replaced by proper documentation, consolidation and conservation of existing features.  Some exceptions were made in cases where clear evidence existed, matching materials and techniques were available, and structural benefits could be derived from reconstruction.  Instead, “virtual” reconstruction by three-dimensional models or computer simulations will be offered to visitors, whenever archaeological and historical research provides sufficient information, as part of the specially designed presentations within or near the site.  A central objective of the projects is to create an example of conservation work carried out to modern international standards, in all phases of the conservation process that can be used as a benchmark and a reference point for future work by the Directorate of Antiquities and other agencies.

Developing Local Capacity
In all project locations, community participation, training of local professionals and local institution-building are essential components of AKTC’s activities.  The objective was to train staff members of the Directorate of Antiquities, local craftsmen and building professionals in modern conservation practice, whilst carrying out conservation work, so that high standards of conservation can be replicated at other sites.  Training was provided by experts in the field of conservation both on site and through workshops and seminars.

Sustaining Cultural Heritage
Building a sustainable future for cultural heritage sites in which AKTC has invested is an important aspect of any project.  In Syria, AKTC worked closely with the Directorate of Antiquities to develop management plans for the Citadel sites, including promotion of financial self-sustainability. 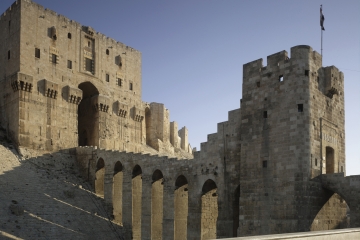 One of the oldest cities in the Middle East, Aleppo had developed as a crossroads between east and west, straddling important trade routes linking the desert to the sea.  Until 1930, the city remained more or less confined within its mediaeval boundaries, limited by its walls and early suburbs, which were surrounded by pistachio, fig and olive groves.

Prior to the current situation, approximately 100,000 people, or five percent of the two million population of the city, live in the historic Old City.  A great many monuments are found amidst the historic fabric of the city.  It was recognised by UNESCO as a World Heritage Site in 1986.  The Citadel of Aleppo, which rises above the ancient city of Aleppo, is one of the foremost monuments of the Islamic world. Inside the walls, a long history of bombardments, pillaging and earthquakes had taken its toll. Conservation focused on a number of key areas that had a spatial or historic coherence: the Ayyubid Palace complex, the western section of the Citadel crown and the main surrounding walls.

The project included significant investment in landscaping around the Citadel, creation of a pedestrian zone at its entrance, traffic planning and conservation of key buildings.  The objective was to enhance the Citadel’s place in the city and realise its potential as a significant contributor to economic development in the old city.  In all cases, the objective was to create exemplars of historic monument conservation, thereby setting a benchmark of good practice, and to develop skills of local crafts people and professionals through training.  Sustainability is a key aspect of AKHCP’s projects; the programme at the Citadels included investment in facilities such as visitors’ centres, pathways and guidebooks, and development of site management procedures.

Restoration work inside the Citadel of Aleppo was completed in 2006. 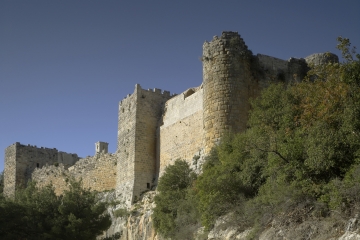 The Citadel of Salah al Din is located in the coastal mountain range, close to the coastal town of Lattakia. Its natural setting is spectacular, resting high on a ridge between two deep ravines, and surrounded by forest.

Much of what remains visible today dates from the Franks, who occupied the site around 1100 AD.  The Crusader walls were breached by the armies of Salah al Din in July 1188, and it is from this victory that the castle takes its present name.  Over the next hundred years, the new Muslim rulers built a mosque and a fine palace and baths at the heart of the castle complex.  Later, a madrasa was also constructed. It is these Ayyubid and Mamluk sections of the Citadel that AKTC selected for its conservation efforts.  Conservation work began in 2000 with the restoration of the mosque and its minaret and the adjacent madrasa.

The minaret posed particular problems: an earthquake had broken the top of the minaret apart, causing it to partially collapse.  Work at the Ayyubid Palace was preceded by a detailed archaeological survey of the ruins carried out by a team from the Sorbonne University in Paris.  All conservation work was completed at the end of 2003. 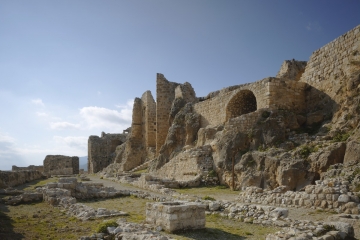 Masyaf Citadel is smaller in scale than Aleppo or Salah ad-Din and situated on the edge of a provincial town.  A fighting castle rather than a royal seat, and more rugged in character, the Citadel was one of the most complete mediaeval fortresses surviving in Syria. Most of what remains standing dates from the period of Ismaili occupation in the twelfth and thirteenth centuries.

The project included conservation of the entire structure.  Just as at the other Citadel sites, the physical conservation work conserved the ruined character of the monument whilst adding support and strength where required.  A small townscape improvement project, in Masyaf, focused on upgrading of the central market complex, Souk al Saghir.  Conservation work on the Citadel began in 2000 on a section of the outer wall, which had partially collapsed.  A comprehensive conservation project encompassing the entire site was completed in 2004.
icon 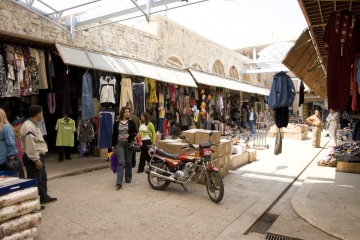 The overall objective of the project is to use built heritage as a catalyst for economic and social development.  Specifically, the revitalisation of the Souq al Saghir aimed to enhance the commercial function of the market without undermining its historical fabric.

The project sought to enhance the physical appearance of the historic market and encourage visitors and citizens of the town to enter the Souq and support local businesses.  The restoration of the Souq al Saghir, or Small Souq, in Masyaf, featured the rehabilitation of 76 traditional shop facades and the replacement of the roof covering the Souq.  AKTC believes that cultural restoration leads to economic and social revitalisation.  The project included traffic engineering measures, street resurfacing and lighting, and the rehabilitation of the Masjid al Noori and the mausoleum of Norrudin Ahmed.

The restoration was part of an area revitalisation plan that includes the restoration of the Masyaf Citadel, the creation of a pedestrian street running from the Citadel to the Souq, and the provision of tourist facilities, including parking for cars and buses.

Restoration work in Masyaf was completed in 2006. 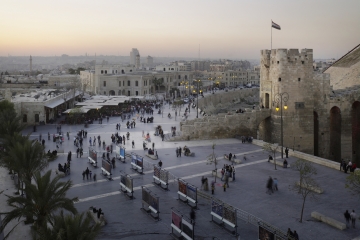 During the early stage of the citadel restoration projects, the Aga Khan Trust for Culture (AKTC) expanded the initial scope of pure conservation work to include the contextual dimensions of the three sites.  A monument’s setting is an integral part of its character. Unplanned development, particularly in the tourism sector, can quickly destroy historic and natural environments.

Alternatively, if managed properly, investment in historic monuments and their environments can preserve cultural heritage and stimulate economic development.  A number of area development projects were planned, working in collaboration with other Aga Khan Development Network agencies dealing with microfinance and tourism.  Aleppo Citadel is located in the heart of the Old City.  The Citadel was like an over-sized roundabout, with a constant stream of vehicles cutting off access from and into the historic town.  In 2004, AKTC initiated a planning project in the perimeter of the citadel, working in close collaboration with the Old City Directorate and Deutsche Gesellschaft fur Technische Zusammenarbeit (GTZ).  The scope of the planning project included major infrastructure improvements, traffic management plans, landscape design and proposals for reuse of key historic structures.  Much of the Old City around the Citadel was residential, occupied by low income populations.

The Aleppo Perimeter Project was completed in 2010.

The project included stimulating housing rehabilitation, possibly through a micro-credit facility.  During 2005, new project opportunities were explored in the Old City of Damascus, together with other AKDN agencies, combining commercial developments with investment and cultural tourism, historic building conservation, urban rehabilitation and micro-finance initiatives.  In 2008, AKTC began work on a benchmark project for the adaptive use of landmark buildings in the historic city of Damascus.

Working with the Aga Khan Fund for Economic Development, an AKDN agency involved in tourism promotion, AKTC embarked on the restoration and development of three historical palaces, Beits Sibaie, Nizam and Quwatli, into hotels.  Each site, using state of the art technical and engineering techniques to survey the walls, ceilings and floors, has been carefully documented.  Once the documentation and planning were completed, a team of experts began the process of restoring the worst damaged parts of the buildings, starting with those areas that were in danger of collapsing.

Restoration work was halted in 2010. 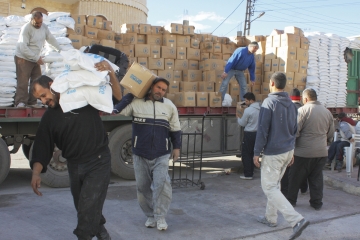