In 2003, the Rural Development Programme in Syria began working with agriculturally reliant communities on the persistent issue of water shortages.  Improved water productivity and efficiency through modernised irrigation technology, combined with agricultural diversification and improved techniques, were at the foundation of AKF’s success in this area.

In some parts of Syria, limited water resources combined with over pumping and poor management led to a persistent problem of water shortage.  To address these chronic issues, the Aga Khan Foundation’s (AKF) rural development programme worked with farmers and local communities to develop more water-efficient methods of agricultural production.  Prior to the current situation, AKF worked with agriculturally reliant communities to tackle a persistent problem of water shortage and irregular rainfall patterns.  Irrigated farmland had decreased from 40,000 hectares in 1960 to an estimated 9,000 hectares in 2007.  Of the approximate 5,000 groundwater wells identified in 2003, almost 3,500 were dry.

Recognising the link between poverty and natural resource endowments, AKF strived to improve livelihoods by using existing resources more efficiently without placing undue pressure on the natural environment.  Within its focus on water management at the farm level, AKF facilitated access to new and improved irrigation technology, bridged the gap between national research centres and small farmers in the delivery of drought tolerant barley and wheat seed, demonstrated the importance and benefit of water harvesting techniques, and initiated research on optimal cropping patterns that maximise production (and revenue) per unit of water utilised.

An overarching aim in this regard was to promote land use systems that have desirable ecological underpinnings and which enhance the availability of choices for production and opportunities to augment livelihoods.

In tandem with efforts to modernise the irrigation systems, AKF supported the adoption of these new technologies and improved agricultural practices, by providing affordable and easily accessible loans (group/individual) and on-farm technical support.  From 2003 to 2009, more than 100 group and some individual loans were disbursed to finance the purchase of modernised irrigation infrastructure.  These loans were provided through the involvement of the First Microfinance Institution (FMFI), an agency of AKDN, with 98 percent of all loans being repaid in the first season.

At the same time, farmers with limited access to sufficient irrigation water identified alternative livelihoods that were not based upon the production of barley and wheat.

Olive orchards, which require less water than cereal and vegetable crops, and poultry production, are two areas in which farmers had begun to concentrate.  For olives, AKF facilitated the creation of the first private olive growers association in Syria.  It provided technical support to the cooperative and attempted to identify potential markets for the high-quality extra virgin olive oil produced by its members.

In the case of poultry, AKF focused on promoting best practices in biosecurity measures, disease surveillance systems and extension services in order to reduce high mortality within the sector.  It also operated a private fee-for-service veterinarian diagnostic laboratory, the first of its kind in Syria, and the first to be licensed with the national animal health directorate.  Despite a reduction in irrigated land area, and increased activity in olive tree planting and poultry production, livestock assets (primarily sheep) still played an important role in securing livelihoods.  New and improved feeding rations and weaning techniques were introduced to complement a long-term local strategy to introduce new breeds and breed stock for sheep. 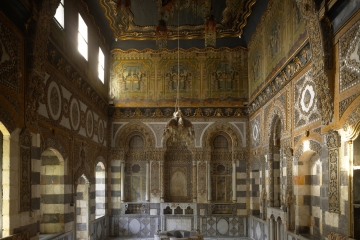