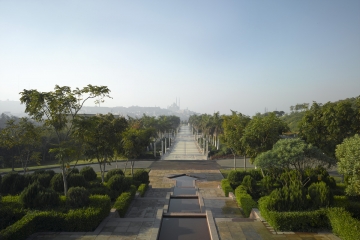 With nearly two million visitors a year, the $30 million Azhar Park - a gift from His Highness the Aga Khan to the city of Cairo - not only generates enough funds for its own maintenance (through gate and restaurant receipts), but has proven to be a powerful catalyst for urban renewal in the neighbouring district of Darb al-Ahmar.

The project included the excavation and extensive restoration of the 12th Century Ayyubid wall and the rehabilitation of important monuments and landmark buildings in the Historic City.  It encompassed an extensive social development programme, including apprenticeship arrangements, housing rehabilitation, micro-credit and health care facilities.

The multidisciplinary project presented a range of complex technical issues, including highly saline soils and the incorporation in the park of three large fresh water reservoirs for the city of Cairo, each 80 metres in diameter and 14 metres deep.  Builders had to clear a 500-year-old accumulation of fill and debris.  The massive excavation required moving 1.5 million cubic metres of rubble and soil, the equivalent of more than 80,000 truckloads.  The horticultural challenges were also formidable.  After the creation of specialist nurseries to identify and grow the best plants and trees for the soil, terrain and climate, over two million plants and trees were propagated.  Over 655,000 have now been planted in the park.  To extricate the 12th century Ayyubid wall, which had been buried up to its crenellated battlements, it proved necessary to excavate to a depth of 15 metres.  A 1.5-kilometre section of the historic wall, with several towers and battlements almost intact, then appeared in all its splendour.

In the low-income neighbourhood of Darb al-Ahmar, which is adjacent to the park, job training and employment opportunities have been offered in different sectors such as shoemaking, furniture manufacturing and tourist goods production.  Apprenticeships for automobile electronics, mobile telephones, computers, masonry, carpentry and office skills were made available. Micro-credit loans enabled residents to open small businesses such as carpentry shops and a drycleaner.  Hundreds of young men and women in Darb Al Ahmar found work in the park, in horticulture and on project teams restoring the Ayyubid wall.  Three landmark buildings, the 14th Century Umm al Sultan Shabaan Mosque, the Khayrbek complex (encompassing a 13th century palace, a mosque and an Ottoman house), and the Darb Shoughlan School were restored. A number of other monuments have also been restored.  Local housing has been renovated and returned to their owners.  A housing credit scheme aided private individuals in the rehabilitation of their own houses.

The project was intended to test the premise that there is an alternative to traditional remedies to the decline of historic neighbourhoods.  These usually involved isolating monuments by the forced removal of people in surrounding neighbourhoods or accepting a laissez-faire approach that allowed commercial developers to set the priorities of a neighbourhood.  In either case, residents were displaced.  The approach of the Aga Khan Trust for Culture, on the contrary, has been to stimulate rehabilitation without displacing residents, largely by ensuring that they have a stake in the future of their community—by helping create viable businesses through the provision of micro-credit and assisting owners restore crumbling houses, for example.

As with all its undertakings, the Trust’s approach has been to work with local residents to identify priorities and then take practical steps to address these needs.  Community priorities, including restoration of houses, health, education, solid waste disposal, job training and jobs, are now being addressed. The construction of the park and the restoration of cultural monuments are meant to be catalysts for social and economic development and the overall improvement of the quality of life in the district.  At the same time, the park offers a new vantage point with spectacular views of Historic Cairo’s countless architectural treasures, which will no doubt draw foreign tourists and the inhabitants of greater Cairo alike to the once-neglected area.

Additional publications can be found here:

Other resources are available on Archnet.org. 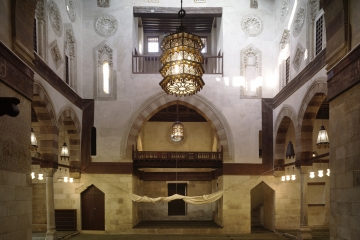 On 26 October 2007, His Highness the Aga Khan, His Excellency Farouk Hosni, Egypt’s Minister of Culture, and His Excellency Dr. Abdel Azim Wazir, the Governor of Cairo, inaugurated the restoration and revitalisation of two landmark buildings in the district: the fourteenth century Umm al Sultan Shabaan mosque; and the Khayrebek complex, which encompasses a thirteenth century palace, a mosque and an Ottoman house.

They were just the latest restoration projects that encompass other landmark buildings, notably Aslam Mosque (and the square in front of it), the Blue Mosque and the Tarabay mausoleum, as well as a number of smaller buildings, including schools.   The Umm al Sultan Shabaan mosque and the Khayrebek complex  - meant for adaptive re-use - were immediately pressed into service for a clinic and a temporary school (while the school was renovated by the Aga Khan Trust for Culture).  Once services resumed in Umm al Sultan Shabaan mosque, restoration of Aslam Mosque and the public space around it began.  The excavation and restoration of the Tarabay mausoleum also started.  The Darb al-Shouglan school building - once a complete shell without a roof or floors - was transformed into a centre for community activities and early childhood development.  It also houses the Project’s offices, meeting spaces and a library.

A conservation plan for all the 13 shiakhas of the district was completed - a major step in creating a comprehensive urban development plan for the district.  The aim of the plan is to preserve urban heritage and identify architecturally significant buildings which are under threat.  Twenty-five action areas were delineated, laying the groundwork for a master plan that hopes to preserve the district’s cultural assets while finding ways to leverage those assets in sustainable ways.

For more information, please see the monographThe Azhar Park Project in Cairo and the Conservation and Revitalisation of Darb al-Ahmar: 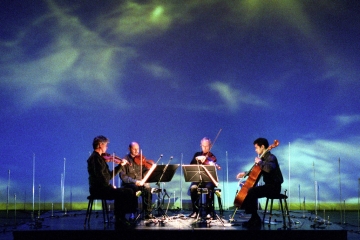 Al-Darb Al-Ahmar Arts School was established in 2011 in partnership with Al-Mawred Al-Thaqafy (Cultural Resource), a Cairo-based NGO.  The school focuses on training children and young adults from Al-Darb Al-Ahmar and other low-income quarters of Cairo in circus arts, theatre, and music—particularly brass and percussion instruments.

The school also offers English classes, computer studies, and cultural courses.  Students have opportunities to perform newly created work in nearby El Geneina Theatre, an open-air amphitheatre built into Al-Azhar Park, as well as in other venues in Cairo.

Al-Darb Al-Ahmar, one of the oldest and most densely inhabited neighbourhoods of Cairo, is the focus of a long-term revitalisation and rehabilitation project of the Aga Khan Trust for Culture that also includes Al-Azhar Park, a 74-acre site created from a 500-year-old debris dump in central Cairo. 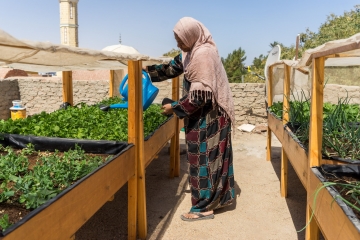