Home | Where we work | Germany

AKDN and Germany have held a long term partnership dating back to 1988. Over that time, AKDN has worked with a number of German partners, particularly around infrastructure, governance, education and cultural restoration.

hide
In 2004, a Memorandum of Understanding was signed with BMZ (the Federal Ministry for Economic Cooperation and Development) with an aim to deepen collaboration.

AKDN maintains a number of important partnerships in Germany, including with BMZ (Federal Ministry for Economic Cooperation and Development); GFFO (German Federal Foreign Office); GIZ (German Agency for International Cooperation); KfW, which has been a partner in a number of projects; DEG (German Investment and Development Cooperation), a KfW subsidiary; DAAD (German Academic Exchange Service); and with Deutsche Welle (Germany’s international broadcaster).

In Afghanistan, these partnerships have established hospitals through public-private partnerships, built roads and irrigation canals, provided microfinance and restored Afghanistan’s rich cultural heritage in Kabul, Herat, Balkh and other locations. Through the Stabilisation Programme for Northern Afghanistan (SPNA), an innovative programme of small, community-led infrastructure projects, local people are encouraged to take charge of their own development. Following community consultations, nearly 430 projects have been implemented, responding to the needs local people identified as the most important to them. This builds more than infrastructure; it also builds trust, government legitimacy and civic engagement.

In Africa, instrumental partnerships have helped the Aga Khan University’s nursing and midwifery schools to expand and assisted in the establishment of a new Graduate School of Media and Communications. They have also helped establish health programmes for cotton farmers in Burkina Faso, create energy infrastructure in Uganda, support microfinance in Cote d’Ivoire and promote tourism in East Africa.

AKDN has partnered with Freie University of Berlin through social inclusion work targeting Afghan communities residing in Germany (Berlin and Hamburg) and focused on addressing content gaps within state ECD curriculums that preclude Afghan parents from accessing ECD services for their children.

His Highness the Aga Khan has spoken in Germany on a number of occasions, including in 2004 at the fifth German Ambassadors Conference, at the invitation of the German Minister for Foreign Affairs.

He received Die Quadriga’s 2005 Prize in recognition of the work of the Aga Khan Development Network.  He also received the “Tolerance” Award from the Evangelische Akademie Tutzing in recognition of his efforts to promote greater understanding and respect between peoples and cultures, and for his dedication to social, cultural and economic development in some of the world’s poorest countries.

AKDN has also presented several exhibitions of art and objects from the Aga Khan Museum, seminars on architecture, and concerts of Central Asian music at a number of venues in the country. 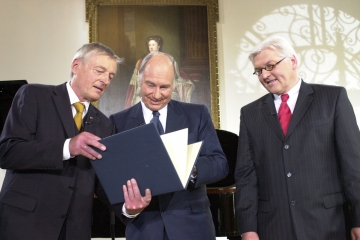