To say that Tajikistan is prone to natural disasters is to understate the issue. Approximately 93% of the country is classified as mountainous. Much of it exists along a seismic rift. The frequency of disasters has only risen because of climate change.

As a consequence, the Gorno-Badakhshan Autonomous Oblast (GBAO) – one of the districts where AKDN works – is extremely vulnerable to flooding, mudslides, rock falls, avalanches, landslides and earthquakes. Many communities within GBAO are also located in remote areas, making disaster relief efforts extremely difficult and often dangerous.

The Aga Khan Agency for Habitat (AKAH) has been active in Tajikistan since 1997. Its major efforts concentrate on fostering disaster resilience in isolated mountain communities, strengthening the communities’ capacity to prepare for and respond to disasters, and enhancing the local and national government’s capability to assess, prepare for and respond to natural disasters in a timely and effective manner.

By applying a community-based approach and partnering with the Government of Tajikistan‘s Committee of Emergency Situations and Civil Defence (CoES CD), as well as other non-governmental agencies, AKAH Tajikistan seeks to reduce the risk of hazards and disasters that threaten local communities. 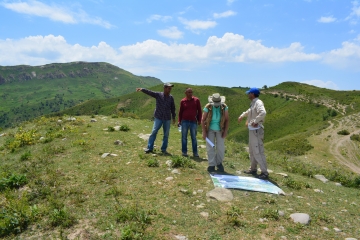 In the fragile ecosystems of Tajikistan, where 40% of water systems are thought to be at risk and forest cover has declined to 3%, AKAH is integrating disaster risk reduction and natural resource management to help build climate resilience and reduce carbon emissions.
AKAH
Related Information
AKDN Humanitarian assistance
Preparedness and response

Since its establishment, the Aga Khan Agency for Habitat (AKAH) Disaster Response Teams (DRT), in coordination with the Government of Tajikistan, have responded to over 200 incidents and dozens of major natural disasters.  They have also provided relief and aid to affected communities.

Emergency Management teams trained by AKAH aim to build resilience against disaster events and build the capacity of community members in Disaster Risk Reduction (DRR) and Community-Based Disaster Risk Management (CBDRM).  The project also conducts hazard and risk assessments and works to improve risk anticipation through the establishment of an Early Warning System (EWS).  AKAH has so far trained tens of thousands of volunteers for disaster response and management across Central and South Asia, and many more in the other countries in which it works.  Major accomplishments of AKAH and its programmes in disaster response include:
icon 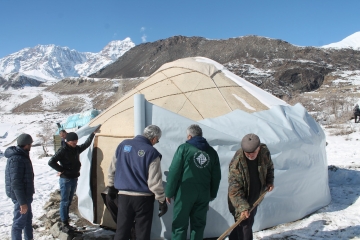 Following a 7.2 magnitude earthquake in December 2015, AKAH, with support from the Swiss Agency for Development and Cooperation and United States Agency for International Development, procured and mobilised 26 yurts for affected villagers in the Bartang.
FOCUS
Recent response activities

AKAH's Disaster Response Teams are on alert 24 hours a day, ready to respond to disasters at a moment’s notice.  Examples of recent disaster responses include:

Furthermore, AKAH collaborates with sister agencies of the Aga Khan Development Network (AKDN) to integrate risk management strategies into long-term development efforts, further ensuring sustainable improvement of the quality of life for the people of Tajikistan. 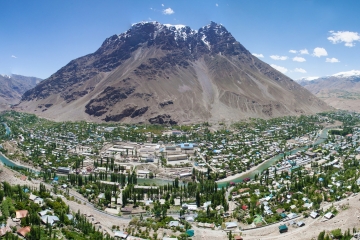