In Tajikistan, the Aga Khan Agency for Habitat (AKAH) engages with communities living in precarious mountain environments to increase their resilience to natural disasters and complex emergencies. It also supports them in finding ways for their “habitat” to enhance their health, education and economic development.

The AKAH approach is to predict, where possible, potential emergencies that may impact homes and livelihoods, identify structural and non-structural interventions that can prevent or mitigate the impact of those hazards, and to build the capacities of communities and local and national Governments to reduce their vulnerability to risk and simultaneously to increase the  capabilities of governments to help their neighbours. 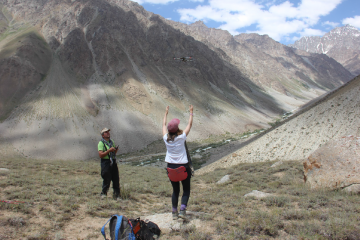 Use of a drone near Patkhur village in GBAO to collect data that will help assess the potential impact of a lake outburst.
AKDN / Courtesy of AKAH
Related Information
AKDN Habitat
Overview

Tajikistan continues to be highly vulnerable to the impacts of climate change, with a recent World Bank publication - "Adapting to Climate Change in Europe and Central Asia" - indicating that Tajikistan is the most vulnerable country in Central Asia and Europe.

The changing environment in Tajikistan has led to a significant increase in the number and impact of natural disasters, which has facilitated an engagement from the international community and the Government of Tajikistan to work to address the risks posed by these changes.

With financial support from the European Commission, World Bank and the governments of Japan, Switzerland, United Kingdom, Canada and USA, AKAH (and its predecessor FOCUS) has worked to meet the challenges of the communities by partnering disaster-resilience with the Government of Tajikistan’s Committee of Emergency Situations and Civil Defence (CoESCD), Main Department of Geology, Hydrometeorology Department and the Institute of Seismology, as well as the Ministries of Education and Health and the Local Governments in Gorno-Badakhshan Autonomous Oblast and other respective regions of operation. AKAH has made strides in enhancing the resilience of more than 1.5 million people from local communities residing in Tajikistan to natural and man-made hazards.

Climate Change Adaptation in the Pamir Mountains of Tajikistan

In 2015, to increase the understanding and preparedness levels of civil society on climate change related hazards; AKAH (through FOCUS) in Tajikistan implemented 51 Hazard Vulnerability Risk Assessment (HVRA) activities in the districts of Ishkashim and Shugnan in Gorno-Badakhshan Autonomous Oblast (GBAO).

The HVRA activities were completed as part of the Climate Change Adaptation in the Pamir Mountains of Tajikistan (CCAPM) project, which is supported by the Government of Canada’s Department of Foreign Affairs, Trade and Development (DFATD) and Aga Khan Foundation Canada.

The CCAPM project partnered with communities, schools and government authorities to build in disaster resilience amongst a wide spectrum of audiences and enhance the effectiveness and sustainability of the project.  Over 4,400 hazard maps and village disaster management plans were developed and distributed to households and the heads of sub-districts throughout GBAO.

Eight strategically selected schools in the region were provided with mini weather stations to monitor real-time changes in wind speed and direction, precipitation, temperature, and relative humidity. The installation of the weather stations provides students with the hands-on opportunity to learn and experience the process of collecting and analysing weather data.

Workshops on climate change and locally appropriate adaptation measures were delivered to local civil society organisations including village organisations, women’s and youth groups, community emergency response teams, water usage associations, and institutions at the sub-district level. The workshops were participatory in nature, promoting the incorporation of indigenous knowledge in the recommendations developed.

As part of the CCAPM project, AKAH (through FOCUS and in collaboration with the Government of Tajikistan) hosted a regional conference on Climate Change-Induced Hazards and Coping Mechanisms. Participants included 70 people across Central Asia and Afghanistan representing academia, civil society organisations, governments, media, national and international non-governmental organisations, observers, and project beneficiaries. 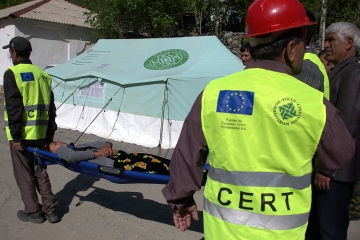 “Fostering Disaster Resilient Communities in Isolated Mountain Environments” is a DIPECHO project, European Commission’s Humanitarian Aid Department (ECHO) under the auspices of its Disaster Preparedness Programme (DIPECHO).  Through this project, Hazard Vulnerability and Risk Assessments (HVRAs) have been completed in 339 villages in GBAO and Naryn town, reaching approximately 400,000 individuals and 139 organisations.

DIPECHO assessments identified hazards and educated villagers on escape routes and safe havens. The HVRAs have resulted in the identification and implementation of structural mitigation projects including the construction of a 45-metre debris flow-diverting wall that protected Visav village during the devastating mudflow in July 2015.

In addition, the assessments have led to the development of Village Disaster Management Plans (VDMPs), and awareness and response trainings. Following a request from the Ministry of Emergency Situations of Kyrgyzstan (MoES KG), a short version of the HVRA report for Naryn was included in their annual publication.

Over the last twelve years through the DIPECHO project, AKAH in Tajikistan and the Mountain Societies Development Support Programme (MSDSP) in Kyrgyzstan (both initiatives of the AKDN) have helped 465,416 people mitigate the impact of natural disasters in parts of the most hazard prone and remote areas of GBAO, Tajikistan and Naryn and Osh, Kyrgyzstan.

To enhance community preparedness levels, specifically with younger generations, DIPECHO established 29 School Disaster Management Teams (SDMTs). The teams are trained and equipped in GBAO and Naryn town of Kyrgyzstan, involving 455 students and 125 teachers. This initiative has not only increased the safety of those within the schools, but also families and neighbours through the dissemination of basic disaster risk reduction information by schoolchildren.

In 2015, as part of the project, avalanche preparedness trainings for 10 Community Emergency Response Teams (CERTs) and two Search and Rescue Teams (SARTs) involving a total of 265 volunteers were conducted.  The SART groups also participated in a 2-day Water Rescue training.

Following an Agreement of Cooperation in 2016 between AKAH (through FOCUS) and the Fire-fighting Division of GBAO, SART training was provided to representatives of the regional Fire-fighting Division in GBAO to help broaden and strengthen their response skills. AKAH also supplied the division with modern response equipment totalling 19,000 EUR.

The eighth phase of the project has been successfully completed, which stems from an agreement between the European Commission’s Humanitarian Aid Department (ECHO) under the auspices of its Disaster Preparedness Programme (DIPECHO) and Aga Khan Foundation (AKF) United Kingdom.

The ninth phase of the project commenced in 2016. AKAH, MSDSP and AKF through the DIPECHO project reduces risk, develops sustainable solutions and promotes widespread systemic changes in risk reduction policy making at the local and national levels in Tajikistan and Kyrgyzstan. Strengthening the capacity of Disaster Risk Management (DRM) and educational institutions increases the ability to assess and prepare for natural hazards and to respond more effectively to emergencies.

In collaboration with government institutions and with the financial support of various donors, AKAH implements community-based disaster risk management activities to help prepare communities residing in high risk zones to be aware of and be able to respond to natural hazards effectively.

AKAH’ critical interventions at the community level include:
icon 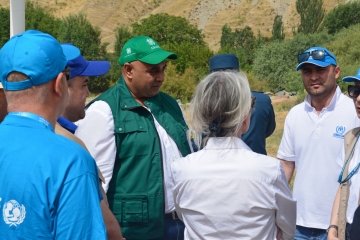 The Aga Khan Agency for Habitat (AKAH), in partnership with the Committee of Emergency Situations and Civil Defence – under the auspices of the Government of Tajikistan – UNHCR, other UN Agencies, government and other humanitarian partners, conducted the second large-scale disaster simulation exercise designed to respond to an emergency situation related to a massive influx of refugees.
AKAH / Subhiya Mamadzamirova
External partnerships

AKAH has established partnerships with United Nation agencies including the World Food Programme (WFP), United Nations Children's Emergency Fund (UNICEF), Office for the Coordination of Humanitarian Affairs (UNOCHA) and number of other International organisations operating in the country such as the International Organisation for Migration, OXFAM, Mission East, Red Cross and Red Crescent Society of Tajikistan, and Moscow State University.

AKAH in Tajikistan enhances the capacity of government and non-government partners in assessing, monitoring, alerting and responding to natural hazards through: 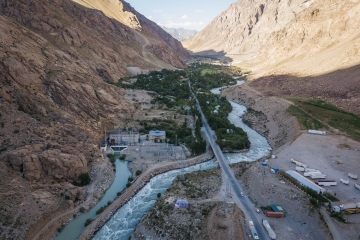