The Aga Khan Music Initiative (AKMI) was created to support the efforts of talented musicians and music educators to sustain, further develop and transmit musical traditions that are a vital part of their cultural heritage.  The Music Initiative was launched in response to the critical need in post- Soviet Central Asia, which included a lack of resources and knowledge to develop the artistic traditions that validate and sustain the local identities and cultural heritage of the region.

Among its activities, the Music Initiative identifies and supports outstanding musical talent, cultivates new approaches to musical performance and pedagogy, documents and disseminates the work of leading musical tradition-bearers, nurtures collaborations among musicians from different parts of Central Eurasia and beyond, and helps talented artists reformulate traditional music in contemporary languages of art.

In Tajikistan, the Music Initiative supports master-musicians, or ustods, who have demonstrated a commitment to the onward transmission and dissemination of their musical heritage through teaching, performing, recording, and mentoring, both within Tajikistan and internationally.  Among them are the Badakhshan Ensemble, which performs its own arrangements of vocal and instrumental music from the Pamir Mountains, and Sirojiddin Juraev, a virtuoso performer on the dutar, tanbur, and sato, who is a core member of Master Musicians of the Aga Khan Music Initiative.  Juraev’s neotraditional arrangements of Tajik folk and classical music have been performed by the San Francisco-based Kronos Quartet and in an ongoing collaboration with renowned pipa player Wu Man and frame drummer Andrea Piccioni.  The Music Initiative released Sirojiddin Juraev’s first solo CD in June 2018.

Khunar Centre, the Music Initiative’s partner in northern Tajikistan, offers a master-apprentice (ustod-shogird) training programme to children and young adults throughout northern Tajikistan’s Sogd Region and operates a school for gifted children in Khujand.  Students in the training programme study instruments such as dutar, tanbur, tar, ghijak, and doira as well as classical Tajik vocal music . Khunar is also working with Tajikistan’s Ministry of Education and Ministry of Culture to develop a new curriculum and teaching methodologies for secondary school music education throughout the country.  Khunar Centre oversees Ensemble Dilnavoz, which consists of talented young musicians who perform newly arranged versions of Tajik folk music in the style of “ethno-jazz.”

From 2003-2014, the Music Initiative supported Academy of Maqom, which focuses on the revitalisation and further evolution of local forms of maqom, the classical, or art music tradition that, in various local forms and dialects, has been cultivated in urban cultural centres throughout North Africa, the Middle East, West Asia, and Central Asia. The Academy’s rigorous five-year training programme produced seven young master musicians, among them Sirojiddin Juraev, who have all assumed a leading role in teaching, performing, and composing Tajik music.  The Academy also undertook the preparation and publication of a critical scholarly edition of Shashmaqom, the repertory of six lengthy vocal-instrumental suites whose origins and development are historically linked to the cities of Bukhara and Samarkand.  An initial version of this six-volume edition was published in Tajikistan under the auspices of the Ministry of Culture in 2016. The Academy’s Grammy-nominated recording of Shashmaqom appears in the 10-volume CD-DVD anthology Music of Central Asia co-produced by the Music Initiative and Smithsonian Folkways Recordings.  The Academy’s activities have also received support from the President and civil leadership of Tajikistan, and the Academy frequently presented the art of Shashmaqom both within the country and abroad. 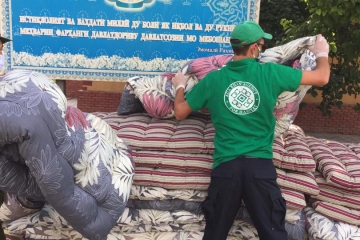