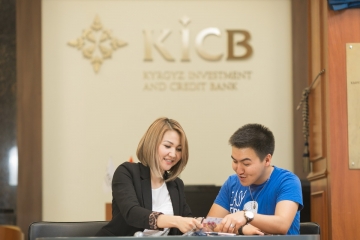 KICB currently serves over 415,000 clients through a network of 39 branches located across all provinces of the Kyrgyz Republic.
KICB
Financial services

The Aga Khan Fund for Economic Development (AKFED) is one of the founders and a principal shareholder of the Kyrgyz Investment and Credit Bank (KICB), established in 2001.  As of August 2016, KICB’s shareholders’ equity amounted to US$58.5 million, including the charter capital of US$17.5 million, making KICB the largest capitalised bank in Kyrgyz Republic.  KICB currently serves over 415,000 clients with a customer deposit base of US$249 million.

The Bank has the one of the largest network, including 140 ATMs, 39 branches (in all oblasts of the country), with headquarters in Bishkek.  The Bank employs over 800 people.  KICB was recognised as the Best Commercial Bank of the year in 2013 and 2014 by  Banker magazine and the Best Bank in Kyrgyz Republic in 2015 by  EUROMONEY.  In line with its core activity, KICB invests in long- and medium-term projects in Kyrgyz Republic’s main economic sectors, including agriculture, manufacturing, construction and light industry.  Since its establishment, KICB has expanded into the retail market, becoming one of the top two commercial banks with total deposit base of US$249 million and one of the top three banks with gross loan portfolio of $148 million as of August 2016.

In line with regulators policy to increase the share of non-cash settlements and transactions, KICB also is the second biggest shareholder at the national processing center IPC (Interbank Processing Center), after the National Bank of the Kyrgyz Republic.  KICB is actively promoting local and international banking cards such as ELCARD, VISA and UnionPay International.

In 2013, KICB expanded its product line with insurance services through the  subsidiary "Jubilee Kyrgyz Republic Insurance Company" (JKIC).  JKIC has launched  life insurance policies -- a new product in the market.  In 2013, KICB pioneered the issuance of corporate bonds among the commercial banks of banking sector with the purpose of supporting the national currency, and increasing capital market liquidity, in line with regulator’s policy.  KICB has invested into establishment of its own Training Center, which has trained over 200 bankers, thereby growing the pool of bankers in the country.

In June 2014, KICB launched "ELSOM electronic wallet" to provide banking products even in very remote areas.  ELSOM facilitates  payment transactions.  Users can receive and send money transfer internally and abroad.  They can open bank/card accounts, link them to e-wallet and manage through mobile phone, or use e-wallets as deposit tool. Since its launch, over 250,000 users have  created "Elsom" wallets reflecting a growing interest in the local population in innovative and reliable financial services systems.  There are more than 3,300 service agents throughout the country providing ELSOM banking services through electronic wallets for non-cash goods and services sale.

KICB  also offers student loans and financial literacy courses.  In line with "Global Money Week", which is held worldwide, KIBC together with partners conducts training for children on financial literacy.  KICB also funded the printing of 485 books in the braille font and 175 books in large type on the "History of Kyrgyzstan" for disabled children (blind and deaf) in Bishkek and Osh.  KICB and partners initiated the Green Foundation to support the growth of the city in an ecologically responsible way. KICB’s efforts in the field of Corporate Social Responsibility were recognised by the International Business Council (IBC) with "Green Awards" in 2015. 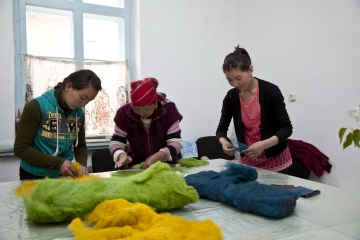 Since 2006 AKF has worked to strengthen opportunities for women to operate small enterprises. It provided training and equipment to female entrepreneurs in order to increase production, and improve quality and marketing.
AKF KR
Enterprise development and Employable skills

Accordingly, since 2006 MSDSP has worked to strengthen opportunities for women to operate small enterprises.  It provided training and equipment to female entrepreneurs in order to increase production, and improve quality and marketing.  Sectors supported include handicrafts, bakeries, and dairies.  A 2011 assessment found that the 18 supported enterprises were operating profitably.  Moving forward, MSDSP will focus its non-farm enterprise development activities in Osh and Jalalabad, and continue to promote appropriate financial services for small businesses.
icon 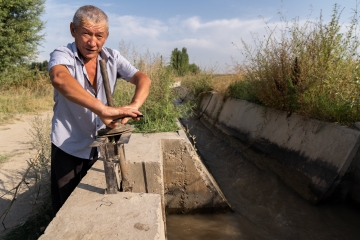 In Osh, Kyrgyzstan, a new concrete irrigation canal means that water can travel a lot farther and faster – rather than being absorbed into the ground – and so more farmers and farms can use the water.
AKDN / Christopher Wilton-Steer
Productive physical infrastructure

Access to reliable and well-managed water infrastructure can have a profound impact on rural livelihoods and improve cross-boundary dynamics between resource users.

Since 2006, the Mountain Societies Development Support Programme (MSDSP) has constructed or rehabilitated 85 irrigation canals benefiting more than 50,000 households and improving more than 56,000 hectares of agricultural land in Naryn and Osh oblasts.  A 2016 independent external cost-benefit assessment found a 84,6 percent increase in irrigation water access during the cropping season and an 75,31 percent decrease in conflict over irrigation water, as a result of these interventions.
icon