The Aga Khan Development Network (AKDN) is engaged at all levels of education, from pre-primary through to university.  Attention to quality is central, and learning achievement is improving significantly.  More than 240,000 students and 7,000 teachers benefit from these education activities.

The Network works with 216 government schools, close to 230 early childhood development centres and over 500 community-based education classes.  It supports the Ministry of Education’s National Education Strategic Plan, paying special attention to female pupils and teachers.  In 2009, for example, only 17 percent of students graduating from AKDN-supported high schools were girls. Today, 45 percent are girls (Read GESP brief and see GESP film  and STAGES video).  Investments in female teacher education are also paying off.  Women now make up 37 percent of school teaching staff, up from 27 percent in 2012 (See Bamyan Teachers’ College video). 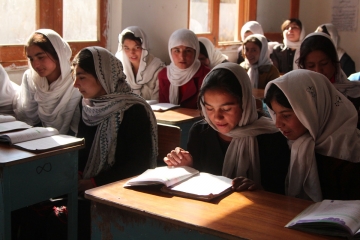 The Aga Khan Foundation (AKF)'s education programme aims at equipping children and young people with the knowledge, skills, attitudes and values that help them interact effectively with the world while contributing to society.  In 2003, AKF began implementing a range of interventions aimed at strengthening the capacity of the Afghan Government to deliver quality education, and at supporting and promoting educational access and quality learning opportunities for all children, particularly girls.

To date, these activities have reached more than 200,000 pupils (42 percent of them girls) and 6,000 teachers and educators.  This represents 56 percent of the total school-age population in the Foundation's programme areas.  It works in 28 districts in the remote provinces of Badakhshan, Bamyan, Baghlan and Parwan.

In addition, to help formerly out-of-school children adapt to their new classroom learning environments, AKES has provided over 10,370 students in different schools a supplementary education programme focussing on Dari, English, Math and Science.  Overall, 94 percent of children from AKF-supported primary schools progress to secondary school.  For girls, it is over 140 percent.  This very high figure shows that the quality of education is improving, that access to school facilities is improving and that communities are taking a growing interest in education for their children.

AKF helps children to stay in school longer by working to overcome the obstacles which prevent many children from continuing their education.

Between 2009 and 2013, secondary school enrolment in these four provinces increased by almost 60,000 students – a 28 percent increase. Although AKF supported less than one-third of all the secondary schools, these schools were responsible for almost half of the increase.

Girls are particularly likely to stop attending school because of constraints related to social custom or lack of transport.  To overcome these obstacles, the Foundation provides assistance to repair school infrastructure and build toilets for girls; provides incentives and accelerated learning programmes for women teachers; provides transportation for girls and female teachers to secondary schools; and promotes a dialogue with community and religious leaders to create a better understanding of the importance of education. 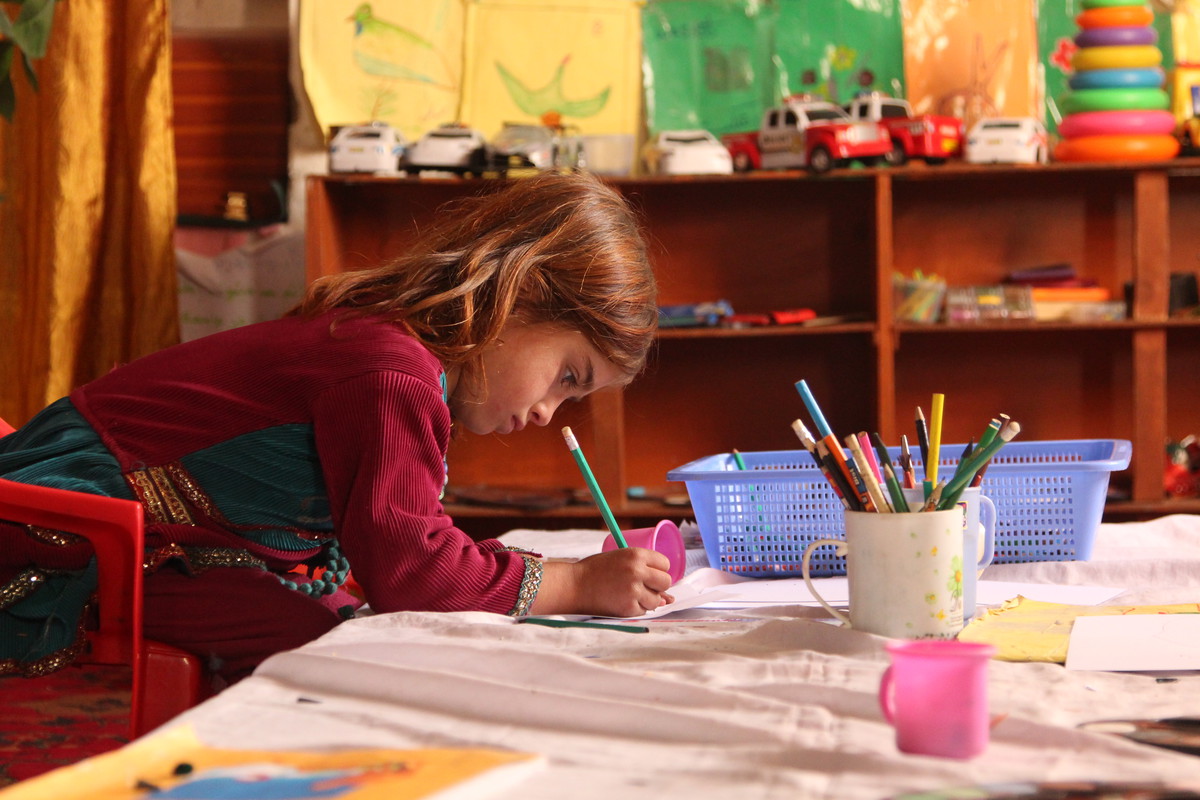 In 2008, in partnership with the Governments of Afghanistan and Canada, AKF started the Girls’ Education Support Programme (GESP) in several remote provinces of Afghanistan: Badakhshan, Bamyan, Baghlan and Parwan.

As a result, between 2009 and 2013, the number of female graduates in AKF-supported schools increased by more than ten-fold.  AKF works to improve the quality of teaching and learning by providing in-service teacher training and individual, in-classroom mentoring of teachers.

Teachers in schools supported by the Foundation receive training in improved teaching methods based on child-centred teaching.  To date, the Foundation has provided training and support to over 6,000 teachers (38 percent female) and educators.  Parent-Teacher-Student Associations are established in all AKF-supported schools in order to involve parents and the community more closely in their children's education.  Such involvement is essential to ensure the sustainability of educational improvements.

School Management Committees are also established to help improve the day-to-day functioning of AKF-supported schools.  To date, a total of 517 Parent-Teacher-Student Associations, School-Student Associations and School Management Committees have been established and trained in government schools, community-based classes and pre-schools, ensuring community involvement in all schools supported by AKF.

A lack of active support for schools by some communities is an ongoing problem in Afghanistan.  Estimates based on data from field visits indicate that about half of communities are actively engaged in supporting and running their schools, and promoting school enrolment and attendance, as well as assisting in areas of child-protection, such as preventing early marriages.  At the district and provincial levels, the Foundation has provided training and support to all school inspectors and supervisors in the 28 districts covered by the education programme, improving their ability to assist schools effectively.  In addition, the Foundation has been working to raise faculty capacity and teaching quality at Teacher Training Colleges (TTCs) and satellite TTCs.

At the national level, AKF is engaged with the various directorates of the Ministry of Education, for policy dialogue and influence and capacity development.  Efforts and participation in policy dialogue have led Government to recognise the community-based primary classrooms as alternative education provision and include these classes within the National Education Strategic Plan III (2015-2020). 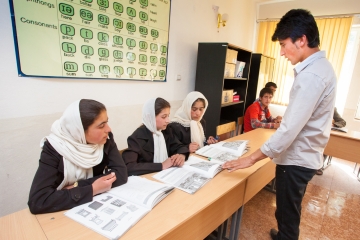 Since 2008, a number of female high school graduates from very remote, rural areas - with hardly any female teachers - have been supported to study in Teacher Training Colleges.  More than 2,300 of them have been awarded scholarships to cover their housing, food and transportation costs.  And, to date, 500 alumni have returned to their communities to become teachers.

In addition, over 26,000 secondary schools students have been provided after-school continuing education programmes in English and ICT.  The University of Central Asia (UCA) is delivering and supporting educational and research programmes in Afghanistan.  With support from the United States Agency for International Development (USAID), UCA has opened six satellite learning centres in Afghanistan, including a Continuing Education Unit at Badakhshan University.

UCA’s School of Professional and Continuing Education (SPCE) is also reaching Afghan learners through its Cross-Border Vocational Education in Badakhshan programme in Khorog, Tajikistan, which fosters cooperation and job creation between Afghan Badakhshan and Gorno-Badakhshan Autonomous Oblast (GBAO).  Students from both regions are awarded competitive scholarships to attend basic and advanced English, Information Technology and Accounting courses at SPCE.

Under the UCA Institute of Public Policy and Administration’s (IPPA) Regional Cooperation and Confidence Building in Central Asia and Afghanistan project (RCCB), Afghan civil servants participated in training in trade economics, policy analysis and international trade negotiations with civil servants from Central Asia; and in a symposium, jointly hosted with the Ministry of Foreign Affairs, on Small and Medium Enterprise Development and Regional Trade in Afghanistan and the Heart of Asia Region.  RCCB was supported by the Canadian Department of Foreign Affairs, Trade, and Development (DFATD). In agreement with the Afghan Independent Directorate of Local Governance, SPCE is adapting and delivering its Local Economic and Community Development certificate programme to Afghan district governors.  In partnership with the Ministry of Finance, IPPA is delivering a Certificate Programme in Policy Analysis to Afghan civil servants. 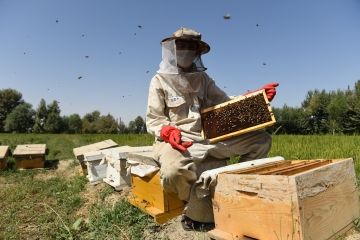