Herat has long been a city of strategic, commercial and cultural significance. It came under the rule of the Abbasid caliphate at the end of the eighth century and was renowned for the production of metalwork.  At a crossroads between competing armies, traders and cultures, Herat was home to Persians, Pushtuns, Uzbeks, Turkomans, Baluchs and Hazaras.  In the fourteenth century, it was sacked by Timur, only to experience a renaissance under the rule of his son Shah Rukh.  Though repeatedly ravaged by war throughout its history, many significant Islamic monuments have survived.  Beginning in 2005 and running over the course of the next decade, the Trust worked hard to safeguard this unique heritage. 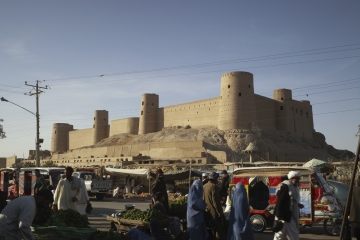 The distinctive rectilinear plan of the old city of Herat and the surviving fabric of residential and commercial quarters makes it unique in the region. It has undergone a dramatic transformation since 2002, largely as a result of uncontrolled construction, which often entails the destruction of historic homes or commercial buildings.  In order to address this situation, a series of surveys were undertaken to track the rapid changes that continue to take place.

In parallel, efforts were made to formulate appropriate plans for key neighbourhoods, in order to preserve the unique character of the old city.  An Old City Commission, comprising representatives of key urban institutions, oversaw urban development and upgrading within the confines of the historic quarter, with support from AKTC.  This helped develop an awareness of the need to safeguard and strengthen official capacity to promote appropriate processes of development in the historic fabric.

In 2005, AKTC initiated a process of mapping of all property in the old city of Herat, which took place in parallel with the conservation of five important historic houses and 17 public buildings, along with the provision of small-scale grants to more than 70 households.  In parallel with these efforts, support was provided for the conservation of two cisterns, several community mosques and private houses, as well as for upgrading of the infrastructure in two quarters of the old city.  This work alone generated more than 60,000 work/days of employment.

Based on surveys of living conditions, investments were made in repairs or reconstruction of 2,500 metres of drain and laying of more than 4,000 metres² of stone paving in pedestrian alleyways.  Along with the removal of solid and liquid waste, these measures benefited more than half the residents of the Old City.  With technical support from AKTC, an Old City Commission now oversees urban development and upgrading within the confines of the historic quarter.  It also formulates neighbourhood plans and raising public awareness of the need for safeguarding in the Old City and beyond. 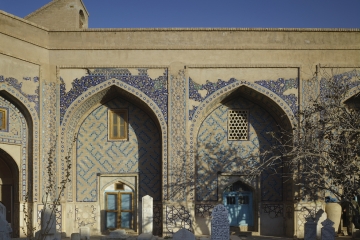 The grave of the 12th century Sufi poet and scholar, Abdullah Ansari, in Gazorgah is one of the most important religious sites in the region.  Situated in the courtyard of an important shrine complex dating from 1425 AD,  Ansari’s grave remains an important focus for prayer and contemplation to this day.

In order to protect the distinctive decoration in the complex, repairs were carried out to all roofs, while access by visitors to the courtyard was enhanced by brick paving, the installation of discreet external lighting and

the replacement of modern fittings where necessary.  Work on documentation and interpretation of the decoration and dedications on the many historic graves that lie in the courtyard of the shrine was completed. Parallel restoration work on the adjoining Namakdan Pavilion (left) and Zarnegar Takiahana was completed.  AKTC’s urban conservation and development work received support from the governments of Germany, Norway, US, UK and Uzbekistan, as well from as the Prince Claus Fund (Netherlands) and the Open Society Institute. 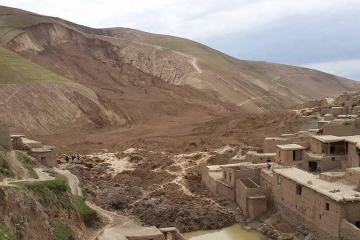