With the help of a number of partners, the Aga Khan Trust for Culture helped restore the Khwaja Parsa Shrine Complex and the Noh Gumbad Mosque in the northern province of Balkh. 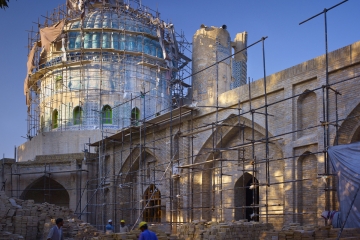 The 16th century shrine of Abu Nasr Khwaja Parsa and a complex of historic structures, located in a public park at the centre of Balkh, were identified as requiring urgent conservation and landscaping works by the Aga Khan Trust for Culture.

With the support of the German Federal Foreign office, the Khwaja Parsa Conservation and Landscaping Project entailed the following work:

The rehabilitation of the landscaping surrounding the park and at the centre of Balkh focused on providing safe access and improved services and facilities for the public.  In order to facilitate better access to the park, new pathways and stairs were laid using brick masonry and, where appropriate, existing pathways were improved and made ready for use by large numbers of people.  Laborers cleared debris from the site, leveled and graded the earth by hand, before laying 12,000m2 of brick pathways using lime-mortar base and over 780,000 locally produced bricks.

The natural landscape was enhanced through the removal of 800m3 of silt deposits from 2 kilometers of surface channels and improvement of the existing gravity-fed irrigation system that distributes water to trees, plants and bushes.  As part of the landscaping works, more than 700 invasive species of plants and trees were removed and the site was replanted with more than 1200 trees and flowers consisting of indigenous species widely available in the local nurseries such as cypresses, plane trees and roses.  A small on-site nursery was established in order to propagate the planting of additional trees in the future. 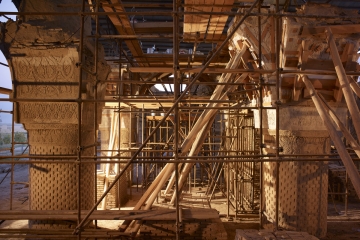 Built between the early eight century and the first half of the ninth century CE, the Noh Gunbad Mosque is believed to be the oldest and most important early Islamic-era building in Afghanistan and possibly in the wider region.

Its original features make it stand out as an early example of an innovative style for mosques, probably influenced by pre-existing Irano-Sassanid patterns.  The exquisite and rare stucco decorations that remain on the columns and arches are believed to be in early Abbasid or Samanid styles and the building has been placed on a tentative list in UNESCO's World Heritage List.  With all nine domes collapsed, the three standing columns and two arches constitute the architectural and artistic core of the site. Badly damaged by time and disregard, the risk of structural failure of the arches in the event of an earthquake is extremely high.

The Aga Khan Trust for Culture worked to stabilise the damaged columns and arch and protect the plaster decoration. This project was implemented together with the Afghan Ministry of Information and Culture and local institutions in Balkh province, and coordinated with international partners including the Délégation Archéologique Française en Afghanistan (DAFA), Associazione Giovanni Secco Suardo / World Monuments Fund, Centre National de la Recherche Scientifique (CNRS), UNESCO and other technical partners.  The restoration was undertaken with support from the Ambassadors Fund for Cultural Preservation of the United States Government. 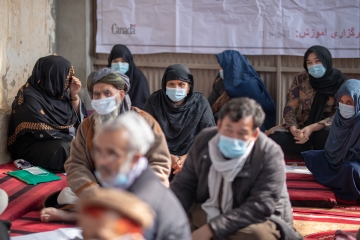 AKDN’s work in Afghanistan during the current humanitarian crisis