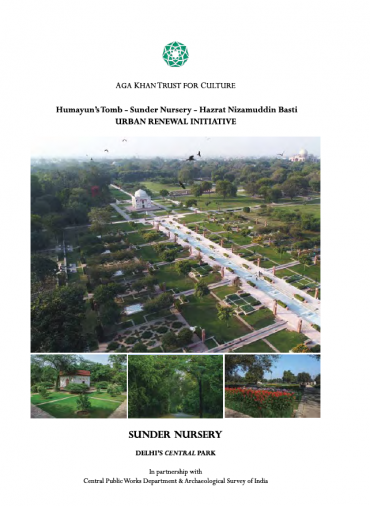 AKTC in India,
AKDN in India

From the 14th century onwards, the Nizamuddin area has seen a profusion of building activity. Serai's, Tombs, Baoli's, mosques, lofty gateways and garden pavilions have all been built along the River Yamuna. In the 16th century, the Grand Trunk road was built through the area, which encompassed several enclosed garden tombs, including that of Emperor Humayun. By the 19th century, the area stretching from Purana Qila at its northern edge and Barahpulla at its southern edge - the first Mughal city of Delhi - was being used for agriculture.

It was in the early 20th century, during the building of the capitol complex of New Delhi, that Sunder Nursery was established north of Humayun's Tomb. It was created to propagate saplings for New Delhi's avenues and experiment with plants brought from other parts of the British Empire.

Following a 2007 Memorandum of Understanding (MoU) with the Central Public Works Department, the Archaeological Survey of India and the South Delhi Municipal Corporation, the Aga Khan Trust for Culture (AKTC) commenced conservation and landscape works at Sunder Nursery. The Nursery would eventually become a 90-acre (36 hectare) city park with distinct heritage, ecological and nursery zones, as well as all the expected facilities.