In August 2020, Kiswa Primary School – one of the largest government-aided schools in Uganda’s capital – joined the Schools2030 programme to begin its Human-Centered Design (HCD) journey, led by a team of six teachers. They wanted to identify some of the problems that might lead to low scores for their students, such as non-attendance or dropout rates, and attempt to find actionable solutions that might lead to improved learning outcomes.

First, they needed to work together to identify the specific problems students and their families faced. To do this, teachers at Kiswa Primary began a series of consultations with parents, educators and other stakeholders, and soon zeroed in on an issue to do with school fees. 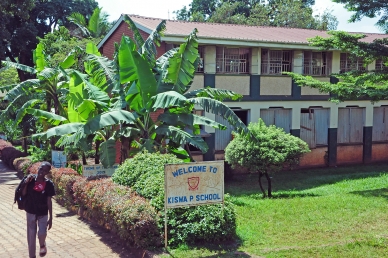 When the government had first launched its Universal Primary Education initiative in 1997 (with the goal of ensuring access to affordable education for all) the school saw a big influx of children, most of whom were from low-income families. Many of these parents consistently struggle to pay the obligatory subsidy towards their children’s tuition. As a result, the school is unable to cover its costs at times, which has led to occasions where the utilities have been cut and disrupted the schooling of the over 1,700 pupils (of whom 54 percent are girls).

In the past, the school’s response had simply been to send the children home, but according to Teacher Justine (the team leader), this is far from an ideal option, benefitting neither the school nor the child. She added: “…some of the children do not even get home when they are sent away. Most of their parents are away at work and the houses are locked.”

A lack of traditional family structures was noted as another possible cause for non-attendance and drop-out rates which, if not tackled early on, can lead to petty crime and sexual exploitation for boys and girls, respectively. For these reasons, the team decided to focus on how best to support families – helping families find financial stability would not only reduce the burden of school fees, but free up time for children and adults alike, allowing for more focus on schooling and leisure activities.

Using the Schools2030 HCD Toolkit – which was developed in 2020 to help educators design solutions to their problems – the team reframed the non-attendance issue as a question, asking: “How might we better support children from low-income families to stay in school?”  It was decided that an “Income Generating (IG) Club” would be started to support these learners with funds to stay at school. Rather than send the children home when they could not pay, teachers would send them instead to the IG club. The model would serve as a prototype, which would then be monitored and evaluated for success, allowing it to be replicated in other schools in the future.

The team engaged the school bursar to identify those pupils who were frequently sent home for nonpayment, as they were likely to come from the most vulnerable households. Twenty pupils were then enrolled into the club, and – to the surprise of the team – 17 of the parents expressed interest in joining as well. Many parents became very active in the club, with some of them offering their time in planning and training. The Kiswa team was pleased to see the club benefitting the parents as much as the students.

The first idea the group had was making popular, donut-like pastries called “daddies”. Once the parents learned how to make these, they were able to go home and sell their own home-made ones to people in their neighbourhood. Other ideas have since sprung up to support the club. Some parents have offered hairdressing classes, and one of the teachers on the HCD team is currently training 10 children on bookmaking. With the entire school population offering a ready market for books, there is optimism for success.

Six months after starting the club, signs began to emerge showing a positive impact on some of the students. Teacher Justine cited the example of Nakayenzi, a girl in Primary 7. Two years ago, Nakayenzi had seemed guarded and mostly kept to herself. She had had no uniform for a whole term, which had prompted Teacher Justine to buy her one. Now, Nakayenzi is clearly excited to start training in hairdressing – her aunt owns a salon and is already teaching her the basics. With the IG club offering her the agency to change her situation, Nakayenzi seems to be much happier and more confident.

Such is the beauty of using HCD to solve community challenges – when local stakeholders can come together, co-identify problems and work towards feasible and actionable solutions, the chances of success are far greater. Thanks to the club, students who would otherwise have missed out on schooling and building vital life skills now have a place to go and stay on the path to future success. Schools2030 has provided both the means and the opportunity for schools to reclaim their agency, as well as to track and analyse their solutions over the programme’s 10 years. With these systems in place, there is optimism that even small-scale solutions could have an enormous impact in the future, not just locally, but globally too.