The beautiful high valleys of the Pamir Mountains hide a secret in plain sight. Food insecurity is rife, and has a serious bearing on the health of local people. Because of prolonged winters and limited growing seasons, basic nutritional requirements – particularly through the consumption of vegetables – remain unfulfilled. Local people rely on the subsistence farming crops of barley, local pea, potato and wheat.

Much of the time, however, crops do not reach the harvesting stage due to the early onset of the winters. Compounding the challenge is that people are unable to purchase vegetables to fulfill basic nutritional requirements. Many women and children suffer from malnutrition and stunted growth. To combat these issues, the Aga Khan Foundation is demonstrating how the construction of greenhouses can allow people to grow vegetables locally, fulfill basic nutritional requirements, and earn some extra income.

Growing vegetables locally was the key. Due to a prolonged winter season, vegetables could not always be transported to remote villages. When vegetables were available, they cost a lot or were in bad condition. And due to seasonal differences, local people found it difficult to locate good quality seedlings – which were usually only available in lower Chitral or “down-country” where the farming season started much earlier. To compound the problem, road conditions affected the seedlings when they were transported to high villages. For all these reasons, local vegetable farming was the answer. But how could vegetables be grown in such climatic conditions?

“Passive Solar Greenhouses” were one answer. In Khot, in the northern province of Gilgit-Baltistan, Pakistan, a demonstration greenhouse was constructed on the land of Rehmat Ali Baig, a resident of Chat Gaz (the upper most part of Khot valley). Onion, tomato, cauliflower, cabbage and capsicum were planted on a trial basis.

The results were highly encouraging. Not only did the greenhouse provide for his needs, but Mr Baig distributed the vegetables free of cost to his relatives. He also sold plant seedlings to other communities, earning a total of PKR 17,000. In addition, he purchased toolkits that allowed him to repair broken panes of glass that had been damaged by a snowstorm. In subsequent growing seasons, Mr Baig committed to meeting the high demand for fresh vegetables locally. To that end, he has added more commercial crops, such as lettuce and onion. 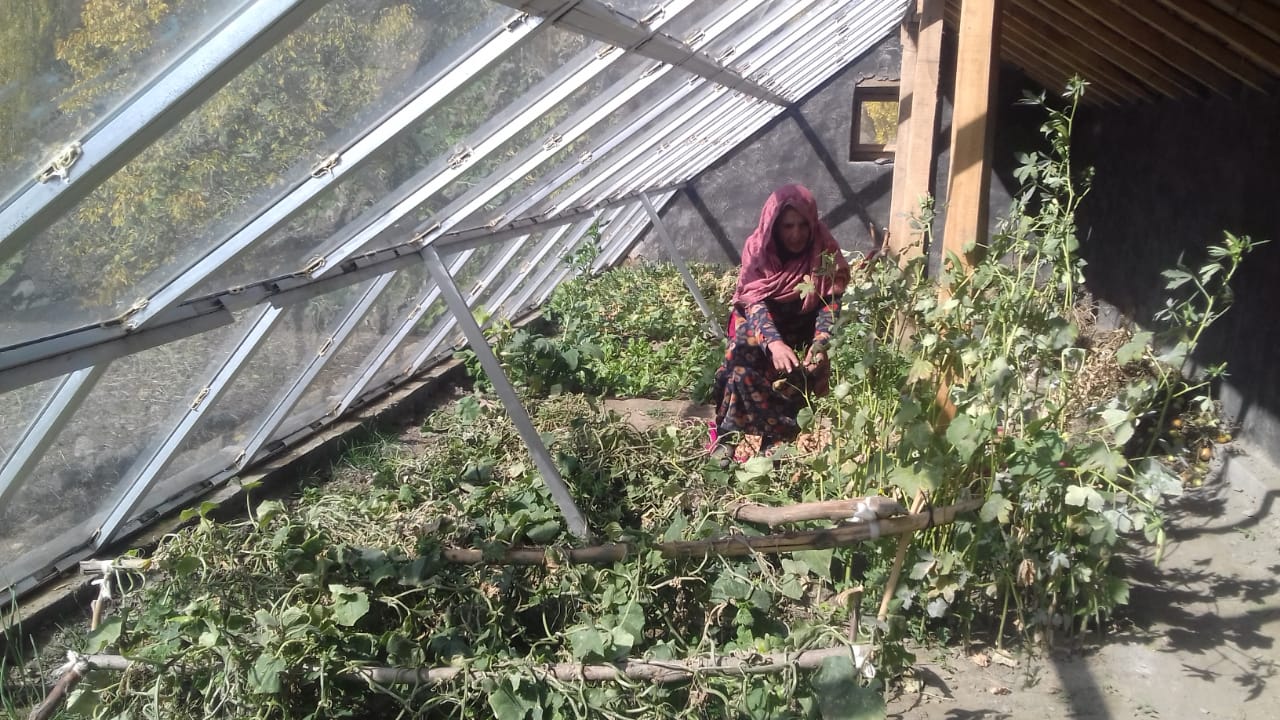 Due to limited growing seasons and the damage that can be caused by climate change, local people have become less interested in growing vegetables in the northern areas of Pakistan. Solar Green Houses in the Rech Valley were therefore a milestone for the promotion of vegetables in the whole valley. For the first time in history, a local resident, Sher Murad, had seen tomato crops reaching fruiting stage.
Copyright:
AKF

In the Rech Valley, there is a similar story of limited growing seasons and the damage that can be caused by climate change. As a result, local people are less interested in growing vegetables. The activity has little economic significance for them; they practice the type of subsistence farming that is widespread in the area. Local people prefer non-perishable food items as there is always the high risk that perishable foods, such as vegetables, will be affected during transportation over bad roads and during storage. Establishing Passive Solar Greenhouses in the Rech Valley was therefore a milestone for the promotion of vegetables in the whole valley.

The first facility was built on the land of Mr Shamsuddin, a resident of Noghore Rech. Vegetable seeds such as onion, tomato, cabbage and lady fingers were sown in the first year. The seedlings of the tomato and onion plants that were ready for transplanting after four months were sold locally or provided free to close relatives. Around PKR 5,000 was earned from the facility.

For the first time in history, a local resident, Sher Murad, had seen tomato crops reaching fruiting stage. Another resident said that because of the greenhouse he got ladyfinger crops ready during the month of June – which was unprecedented anywhere in the locality.

Despite lacking expertise and suffering the depradations of nature, including heavy snowstorms, the entrepreneurs of the high mountains in Gilgit-Baltistan are already planning for the next growing season. Broken panes of glass have been repaired and improved varieties of vegetables seeds, such as tomato, chili, cabbage and onions, were sown early. They are confident that, this growing season, they will not only earn a good income, but provide good quality vegetable seedlings to local communities. Along the way, they will improve the nutritional quality of the food within households and address the issue of food insecurity within whole communities.