For farmers in the Kyrgyz Republic, keeping livestock is a vital source of income. Over the last 20 years, the cattle population in the country has increased by 60 percent. While this has improved the socio-economic standing of farmers and their families, the sharp growth has also contributed to the degradation of pastures, impacting their sustainability.

“The number of livestock is growing every year and there are not enough pastures to accommodate them. I can’t even see some of the pastures that I used to see as a child – they’ve degraded due to overgrazing. If we do not start to focus more on the quality of livestock rather than its quantity, we face the risk of losing our pastures,” said Kubanych Turganaliev, a livestock farmer from Gulcho village in Osh Oblast.

With funding from the Government of Switzerland, the Aga Khan Foundation and Helvetas Swiss Intercooperation have been working with agricultural communities in the Alai and Chon-Alai regions of the Kyrgyz Republic through the Bai-Alai project to help farmers transition to breeding fewer, high-quality cows. The project provides access to natural and artificial insemination services. These enable farmers to produce half-breed cows, which have a higher monetary value and can produce more milk than local breeds, in turn boosting income opportunities. 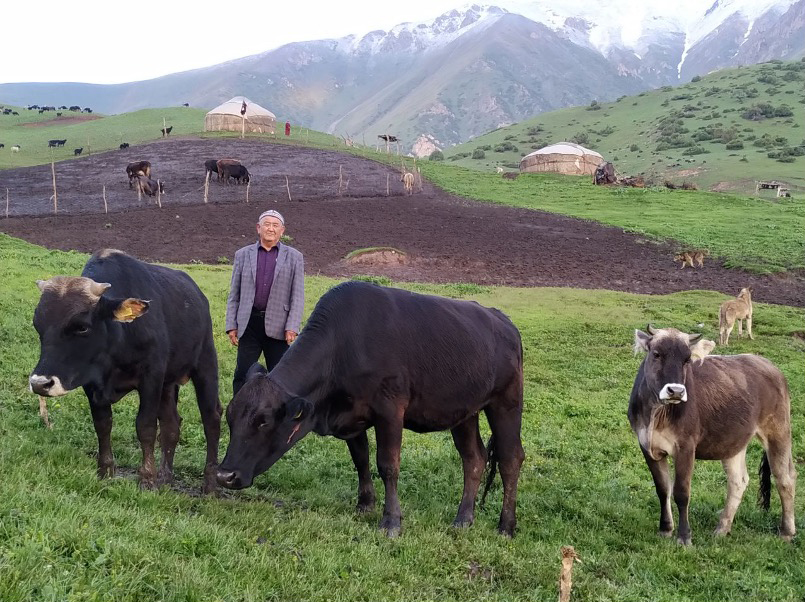 Kubanych Turganaliev is amongst the 14,000 livestock farmers that the Bai-Alai project has supported in Kyrgyzstan's remote mountainous south.
Copyright:
AKDN

In 2016, Kubanych began to look for ways to reduce his livestock numbers while improving the breed. In 2018, he worked with a relative in another district, and first saw the benefits of crossbreeding cows. Kubanych learned that his relative had used artificial insemination and was keen to explore the availability of this service in his hometown of Alai.

He met Bazarbay Begmatov, a veterinarian working with the Bai-Alai project, who artificially inseminated one of Kubanych’s four cows. Despite having some doubts about this new method of breeding, Kubanych’s scepticism disappeared when a year later his cow calved a half-breed Aberdeen Angus calf. The following year, he worked with the Bai-Alai project to produce three more half-breed calves.

“At the moment I have four cows at my farm, and if I keep two pure or half-breed cows instead of four, the maintenance costs will be almost halved, but the benefits will be like keeping four cows,” said Kubanych.

Mamatova Gulbara, Kubanych’s wife, was equally pleased with the results. “Last year we sold a one-year-old half-breed Simmental calf at twice the price of local breeds. We now have a two-year-old Brown Swiss half-breed heifer that will be able to produce 18 litres of milk per day when she starts milking, as opposed to the average seven or eight litres produced by local breeds. When she calves, the milk sales will boost our income.”

Ultimately, the goal of the Bai-Alai project is to reduce poverty in the Alai and Chon Alai districts through increased income and employment, particularly for women and youth, and access to insemination services is just one aspect of its efforts. Since its launch in 2013, the project has reached over 14,000 livestock farmers in the Kyrgyz Republic’s remote mountainous south.

Learn more about the Bai Alai project in this video:

The Bai-Alai project is funded by the Government of Switzerland through the Swiss Agency for Development and Cooperation (SDC) and implemented by Helvetas Swiss Intercooperation (HELVETAS) and the Aga Khan Foundation, through its subsidiary the Mountain Societies Development Support Programme (MSDSP). This project forms part of AKF’s broader enterprise development work in Central Asia to support farmers, producers and small business owners to strengthen their value chains and find lasting solutions to local challenges.