Having worked in disaster management in Pakistan for almost 25 years, the Aga Khan Agency for Habitat (AKAH) is well-positioned to respond to emergencies. We have provided advice, evacuation support and relief services during the extreme heat and heavy rains recently causing intense flooding across Pakistan. 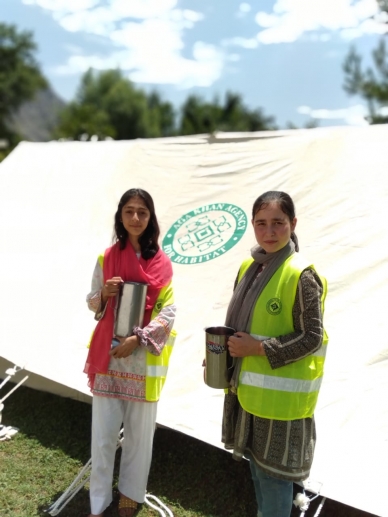 CERT volunteers offering assistance in Sherqilla
Copyright:
AKAH Pakistan
Over the years, we have established 172 Community Emergency Response Teams (CERTs) in Pakistan and have trained over 36,000 community volunteers as first responders. The CERTs were placed on alert and rapidly mobilised to share advisories and warnings, organise evacuations and coordinate relief.

The village of Sherqilla in Ghizer, Gilgit-Baltistan was one of the worst hit earlier in the month. A thunderstorm and heavy downpour triggered flash flooding and a massive debris flow, affecting 250 families in the village. Sadly, seven people lost their lives and two were injured. The debris flow caused severe damage to homes, businesses, cattle sheds, agriculture land, trees, access roads and pedestrian bridges. 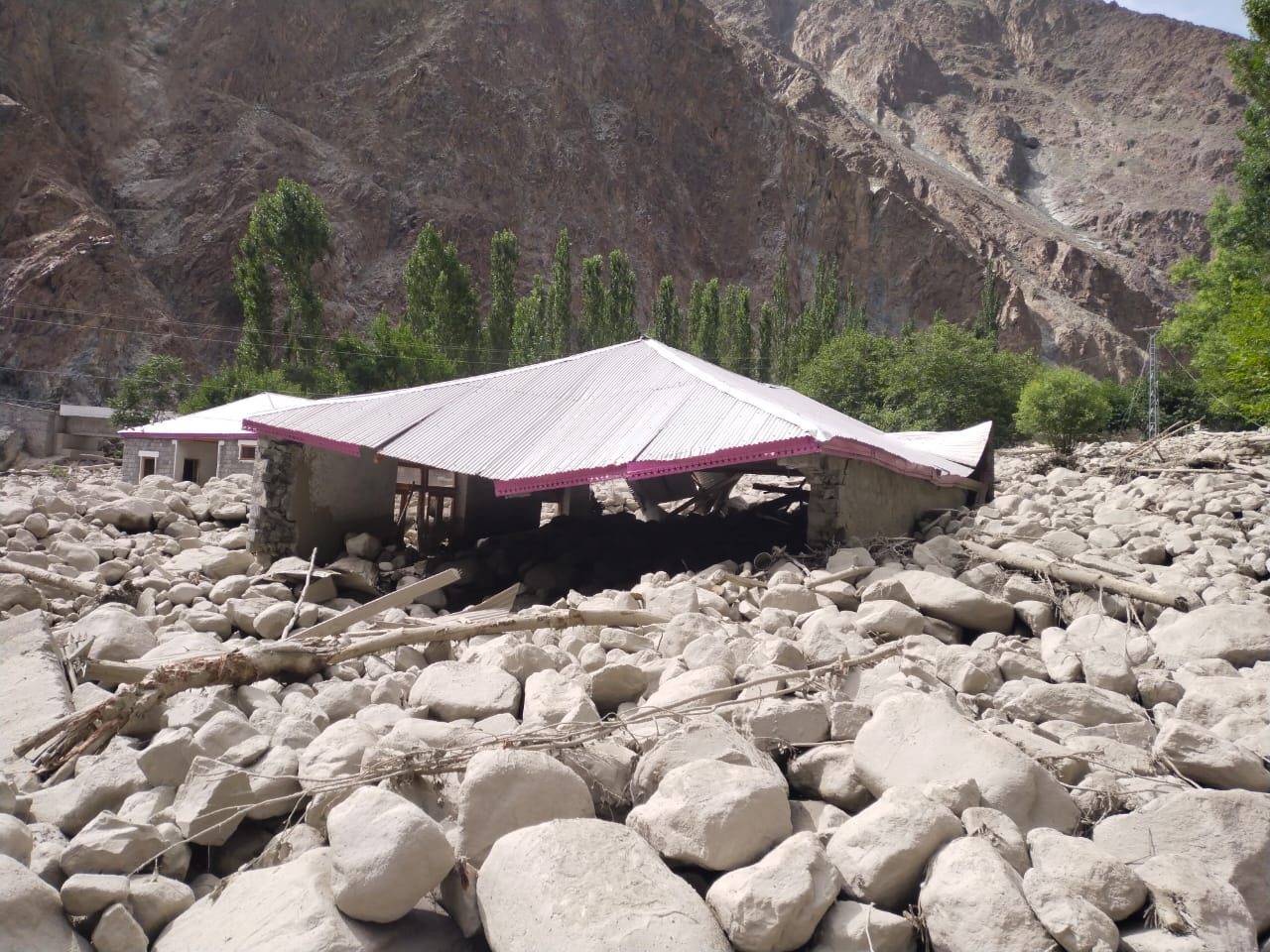 A home destroyed by floods and debris flow in Sherqilla
Copyright:
AKAH Pakistan

A team of AKAH technicians and the CERT safely evacuated the 80 families whose homes were at risk from the debris flow. They are now being housed by host families. We provided food, water, tents, blankets and tarpaulins to 58 families whose homes were completely or partially damaged. CERTs are continuing to work with local communities to evacuate people at risk and to distribute tents and additional relief items from AKAH stockpiles. 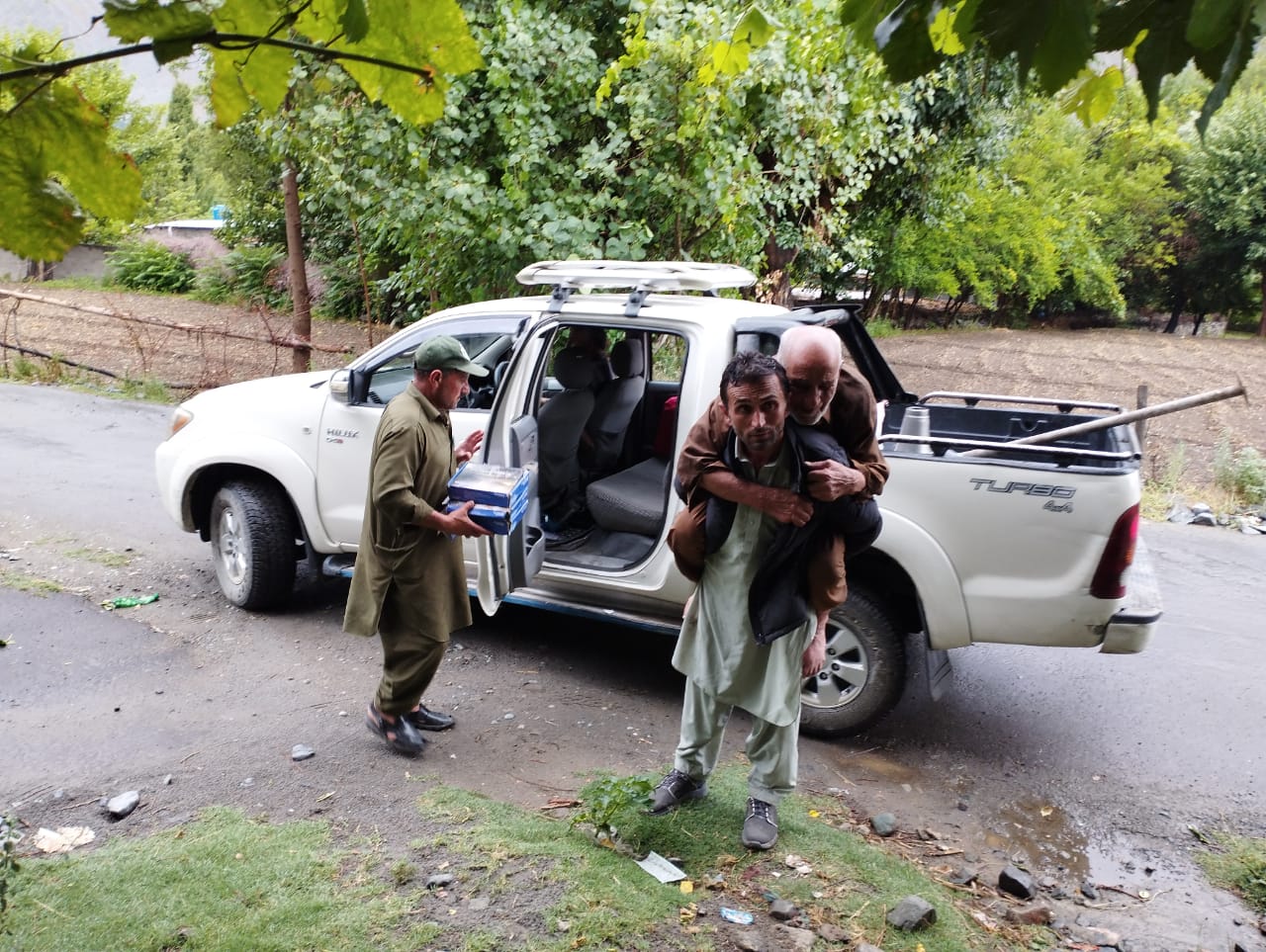 A CERT volunteer helping a family to evacuate from their home in Sherqilla, which was at risk from flood damage
Copyright:
AKAH Pakistan

A CERT volunteer helping to carry the belongings of a family evacuating their at-risk home in Sherqilla
Copyright:
AKAH Pakistan

Fazalat Nama and Aman Paysan were among those we evacuated. They said: “It was hard to see our children and grandchildren in fear and trouble during the floods. They were running here and there to move our belongings. But it was amazing that the young girls and boys, all volunteers, have helped our families. They moved all women, especially those unwell and pregnant, to the tents installed in a safe area. They provided us with all comforts and even offered day-long services at the tents.”

Another evacuee, Abdul Sarab, said: “I was unconscious from the damage happening around me and it was difficult for my family members to lift me. The AKAH vehicle and volunteers in my area were able to move me to a safer area – it was a miracle.” 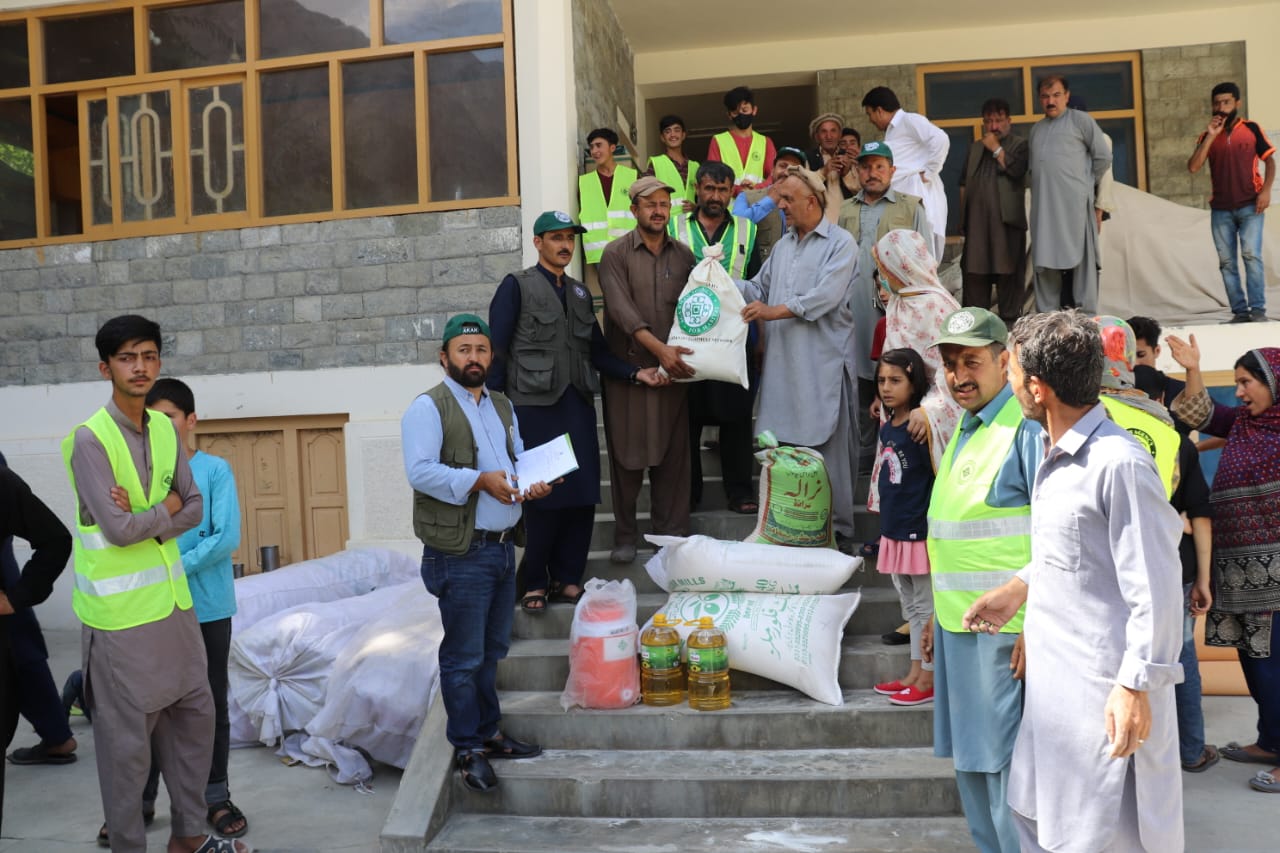 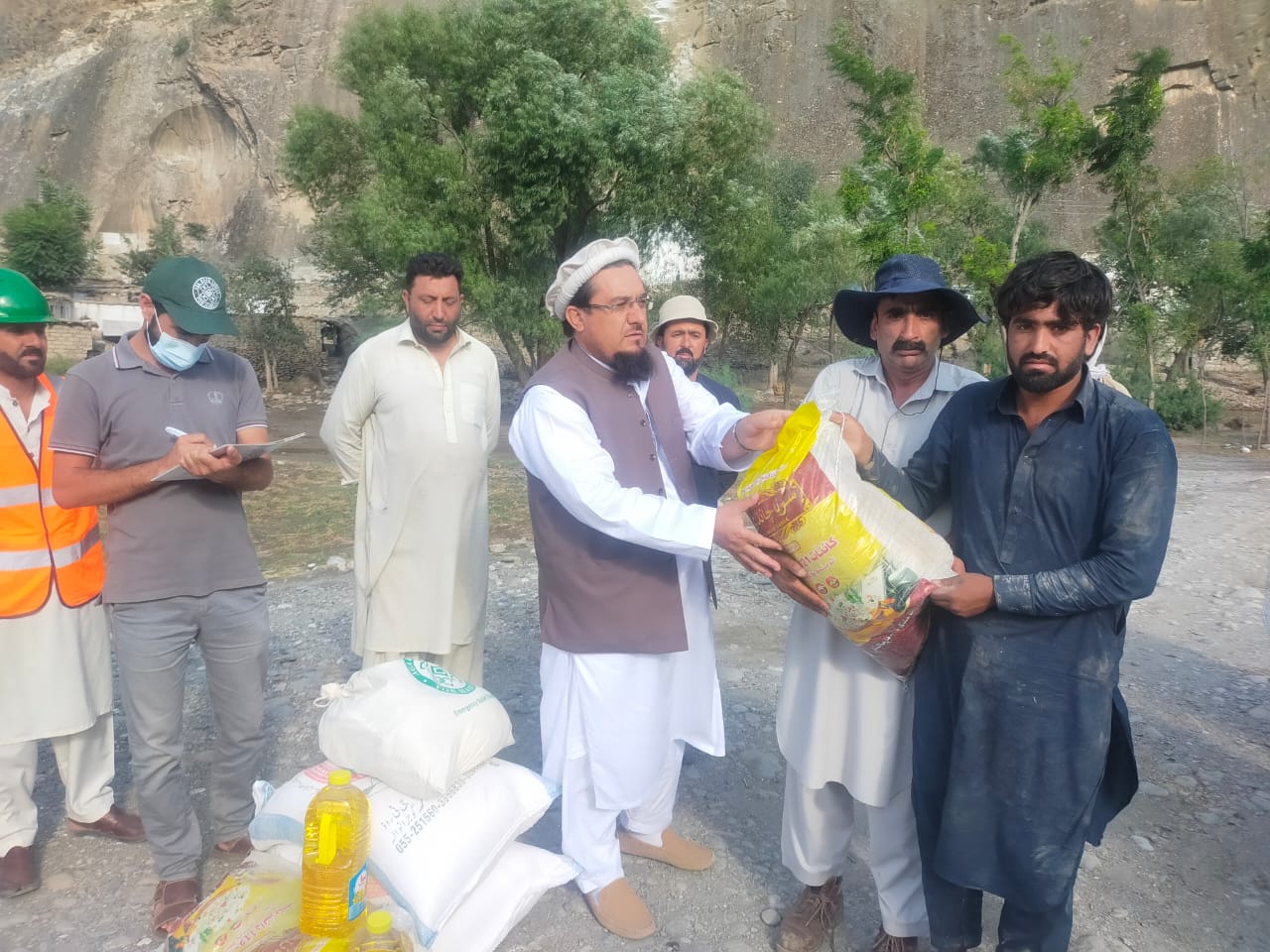 Our Disaster Assessment and Response Teams have assessed damage in the hardest hit villages and shared details about damaged houses with district authorities to inform the recovery efforts. The Chief Minister of Gilgit Baltistan and his cabinet team visited Sherqilla and were briefed on response and relief work by our field team.

The authorities have noted that AKAH’s prompt response has helped save many lives. Captain Tayyab Sami Khan, the District Commissioner of Ghizer, said: “The flood emergency in Ghizer District was huge and it was not possible to handle without teamwork. In such a situation, AKAH was a big helping hand for us. We highly appreciate the immediate response that CERT has provided and above all, the availability of more than 450 tents in the community stockpile is a great act of disaster preparedness at village level.”

In the south of the country, torrential rains caused flooding and widespread damage. Heeding weather warnings, our regional office in Karachi prepositioned water pumps at strategic locations and disseminated weather alerts to the local community. CERTs and local volunteers pumped water out of flooded residential and community buildings and coordinated relief efforts, working with the city government.

This year, extreme monsoon weather and disasters have been particularly intense. Pakistan experienced monsoon rainfall more than 87 percent above normal and 16 glacial lake floods compared to an annual average of five or six.

As we strengthen our community-based disaster management and response activities across the country, we are also intensifying efforts to support longer-term adaptation strategies and expand measures to mitigate future climate change. We are expanding nature-based solutions to promote climate-smart development pathways, including constructing greener water and sanitation infrastructure and planting millions of trees together with the Government of Gilgit-Baltistan to mitigate natural hazard risk. We are also working with the National University of Sciences and Technology (NUST) to develop sustainable habitat plans for disaster-prone valleys in northern Pakistan. 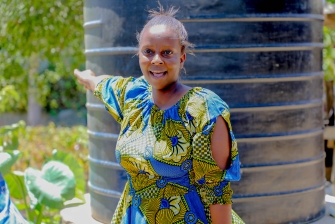 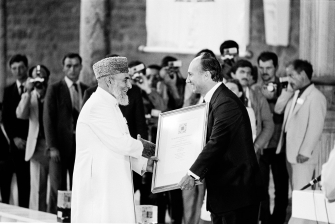 EU grant to assist over 100,000 Afghans and their communities
13 June 2022
View
More Spotlights