The Aga Khan Agency for Habitat (AKAH), working jointly with the GBAO's Committee of Environmental Protection, recently released a snow leopard trapped in a livestock shed in  Rajuz, in the Bartang valley.

The snow leopard, or the so-called “Asian Big Cat”, came down to Rajuz village from the mountains, broke into the animal shed and killed seven livestock. Right after the incident, AKAH was informed by the Committee of Environmental Protection.

Cooperating with the Association of Hunters of Tajikistan, AKAH established a committee, consisting of representatives of the Committee of Environmental Protection and Tourist Police in GBAO, which visited the village. The snow leopard was taken from the livestock shed into a wire mesh cell and was released in the protected watershed of Bartang valley.

As part of its activities in environmental protection, AKAH aims to strengthen sustainable wildlife conservation and enhance habitat management practices through a pilot project entitled “Protecting the Snow Leopard Population Through Effective Habitat Management”, which is funded by the Prince Sadruddin Aga Khan Fund for Environment (PSAKFE). As part of the project, AKAH conducts awareness raising sessions among communities, fosters networks of local volunteers, supports construction works to improve the animal sheds in the villages that protect livestock and informs people about the importance of snow leopard conservation.  In GBAO, the project covers Shugnan and Roshtqala districts, which are part of the snow leopard ranges in the region. 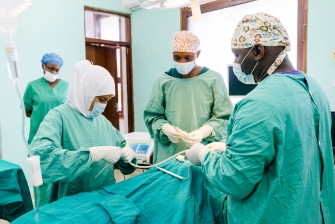