AKDN in the United States of America

The Governor spoke at a luncheon hosted in honour of the Aga Khan’s Diamond Jubilee, drawing upon examples of the Aga Khan’s exemplary leadership and accomplishments in improving healthcare and education and the quality of life for people in developing countries.  He commended the strong spirit of volunteerism within the Ismaili Community, referencing the recent Points of Light Award where the Community  was recognised in the presence of all five living former U.S. presidents for its relief efforts in the wake of Hurricane Harvey.

“We have a state motto - and that motto is friendship. This is a friendship that has lasted many years and that we expect will continue many years into the future,” Governor Abbott remarked.

Speaking in the presence of key representatives of the Texas State Government, City Governments, civil society, academic organisations and the business community, the Aga Khan thanked the Governor for the strong collaboration between the State of Texas and the Ismaili Imamat.  The Aga Khan is founder and chairman of the Aga Khan Development Network, one of the world’s most comprehensive development organisations.

The Aga Khan emphasised the importance of strengthening civil society in Africa, Asia and the Middle East: “civil society is a key resource for development.  Everything we do together to invest and enhance the capacity of civil society is a blessing that you give to the populations in those countries.”

“I hope we can work together in building bridges between our institutions and our programs, and that we can continue to measure the wonderful impact of your generosity and your knowledge,” he added.

The Aga Khan arrived in Houston earlier in the day to a military honour guard and saber salute by the Texas A&M Ross Volunteers. Texas Secretary of State Rolando Pablos, City of Houston Chief of Protocol Deanea LeFlore, and Sugar Land Mayor Joe Zimmerman welcomed him to the State of Texas.  Mayor Zimmerman presented the Aga Khan with a Key to the City of Sugar Land in recognition of his 60 years of commitment to improving the quality of life for some of the world’s most vulnerable populations.

The Aga Khan has made several visits to Texas.  In 2002, then Governor Rick Perry and the Aga Khan jointly inaugurated the Ismaili Jamatkhana and Centre in Sugar Land, as a place to build bridges and encourage mutual exchange between civic organisations and faith communities.  Furthering the commitment of the Ismaili Imamat and the AKDN to their partnership with the State of Texas, the Aga Khan returned at the time of his Golden Jubilee in 2008 and again in 2009, to formalise an Agreement of Cooperation with the State of Texas.  This Agreement enabled collaboration between the State of Texas, the Ismaili Imamat, and the AKDN in the areas of education, health sciences, natural disaster preparedness and recovery, culture and the environment.

Media resources are available at www.akdn.org/USAvisit

About the Aga Khan Development Network
The Aga Khan Development Network (AKDN), which was founded by His Highness the Aga Khan, is a private, international, non-denominational development organisation.  It employs over 80,000 people in over 30 countries.  Its agencies address complex development issues, including the provision of quality healthcare and education services, cultural and economic revitalisation, micro-enterprise, entrepreneurship and economic development, the advancement of civil society and the protection of the environment.  It works in close partnership with public and private institutions, including the U.S. and other governments, international organisations, companies, foundations, and leading American and other universities.

The Aga Khan and the Shia Ismaili Muslim Community
His Highness the Aga Khan is a direct descendant of the Prophet Muhammad (peace be upon him and his family) through his cousin and son-in-law Ali, the first Imam, and his wife Fatima, the Prophet’s daughter.  He succeeded his grandfather, Sir Sultan Mahomed Shah Aga Khan as the Imam of the Shia Ismaili Muslims sixty years ago, at the age of 20.  Today, the Aga Khan leads a global community of Shia Ismaili Muslims, living predominantly in South Asia, Central Asia, Africa, the Middle East, Europe, North America, and the Far East.  Like the Muslim world as a whole, the Ismaili community represents a rich diversity of cultures, languages and nationalities.  Since assuming the hereditary office of Imam on July 11, 1957, the Aga Khan has undertaken the responsibility of improving the quality of life of his community as well as the societies in which they live.  More information is available at https://the.ismaili 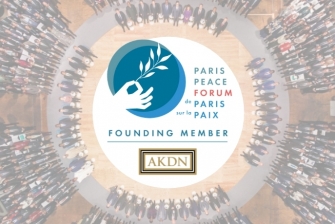