Skip to main content
Prince Rahim Aga Khan meets with the Substitute for the Secretariat of State at the Vatican, Monsignor Edgar Peña Parra
hide

Lisbon, Portugal, 13 May 2022 – Yesterday, Monsignor Edgar Peña Parra, the Substitute for the Secretariat of State at the Vatican, was welcomed at the Ismaili Centre Lisbon by Prince Rahim Aga Khan, accompanied by Mr Nazim Ahmad, the Diplomatic Representative of the Ismaili Imamat to Portugal, and Mr Rahim Firozali, President of the Ismaili National Council.

The meeting offered an opportunity to discuss matters of mutual interest, including the international context in regions of the world where the Ismaili Imamat and the Holy See have a strong presence, the activities of the Aga Khan Development Network (AKDN) around the world, and the relationship between the Ismaili Imamat and Portugal. In particular, they discussed pathways of cooperation for the improvement of the quality of life of populations in Lusophone countries and in other regions of the world.

Monsignor Peña Parra is visiting Portugal to inaugurate venues for the celebrations of World Youth Day, which will take place in Lisbon in August 2023, and to lead the ceremonies to commemorate the apparitions of Our Lady of Fatima. During his visit, he will also meet with the President of the Portuguese Republic, Marcelo Rebelo de Sousa, and Prime Minister António Costa. 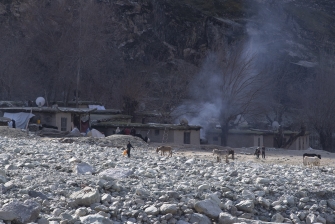