Lahore, Pakistan, 24 March 2022 – Ethnologist and art historian Jean Baptiste Clais, curator of the Asian collection and European porcelains at the Department of Art Objects at the Louvre Museum in Paris, visited the historic Lahore Fort this week to view the restoration being undertaken by the Aga Khan Trust for Culture (AKTC).

During the visit – part of the ongoing collaborative efforts between the Agence Française de Développement (AFD), the French Embassy, the Walled City of Lahore Authority (WCLA) and AKTC – Mr Clais expressed an appreciation for the conservation work and shared his valuable advice when briefed on the plans for the new Visitors Interpretation Centre. 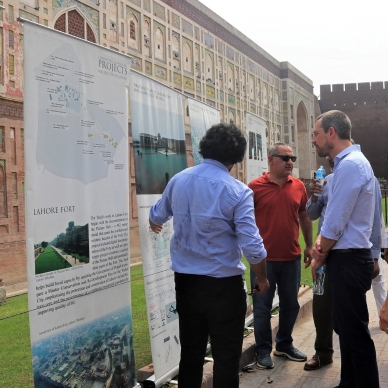 The Centre will enhance the understanding of heritage and focus on showcasing the history and architecture of Lahore Fort. This initiative is part of the AFD-funded Heritage and Urban Regeneration of Lahore and its Buffer zone (HURL) project, recently approved by the Government of Punjab for the promotion of tourism and socio-economic development within the Fort and its surroundings.

In Pakistan, the Trust has preserved several historic sites in the mountainous region of Gilgit-Baltistan. Since 2007, its portfolio has expanded and comprises numerous landmark projects in the Walled City of Lahore, including the ongoing work on the 17th century Wazir Khan Mosque and restored Shahi Hammam (Royal Bathhouse). Since 2015, in partnership with the WCLA and with support from international donors, it began working on Lahore Fort to oversee and implement appropriate conservation interventions. Subsequently, several monuments have been restored, including one of the largest murals in the world – the Picture Wall.

These initiatives will allow the people of Lahore and Pakistan to get better access to their heritage, history and culture in a manner that strengthens national cohesion and pride. It will also promote Lahore as a world-class tourism destination while introducing the historic walled city on a global scale.