Skip to main content
The story of Habib Maiga
hide

Living all his life with his parents and brothers in the city of Bamako-Coura, Habib Maiga, 42, wanted nothing more than being able to contribute to his family’s well being. The owner of a small shop, Habib was determined to build his business in order to improve his family’s living conditions.

Habib was one of the first clients of Première Agence de MicroFinance Mali, applying for a loan when PAMF established in 2006. The first loan of FCFA 250,000 in 2006 ($500) allowed him to expand his business activities and diversify his products through cash purchases from suppliers. Habib is now on his 11th loan, which is for FCFA 1,250,000 ($2000), reinforcing his working capital further and in turn allowing him to invest in more products. These investments have led to an increase in average daily sales from FCFA 75,000 to FCFA 175,000 a day ($291). Subsequently, Habib’s household income has witnessed a fivefold growth to FCFA 500,000 ($833) a month.

This financial security has had a transformative effect on his family. He has invested in his children’s education, saved more, and can afford better food provisions. He has also invested in his own house in addition to renovating the old residence. Moreover, his financial stability has provided much support to his extended family. When one of his cousins lost her husband, Habib took the responsibility for taking care of her and her four children. He has also hired three family members as staff in his business. Habib has also not forgotten his community, making generous contributions to the poorest, supporting neighborhood initiatives, as well as providing employment and training to those that join his business.

With PAMF-Mali’s help, Habib has been able to improve the quality of his family’s and his community’s life. He appreciates the steady increase in the value of the loans, rewarding his loyalty and reliability to service his loans according to plan, without putting him at risk by lending him too much at once. He sees PAMF-Mali as a tool for fighting poverty in the country and around the world, as it supports the hopes and dreams of marginalized individuals.

Habib plans to continue to expand his business by diversifying his product and activities, seeking to transform his plots of land into an agro-pastoral farm. In this way he hopes to further improve his family’s living conditions, giving back to those who have given him so much before. 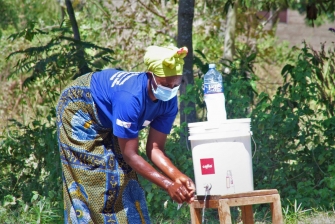