Participating in theatre and drama activities helped Rosa Jorge from a very young age. It gave her the courage to break out of her shell and now she wants to empower her students at the Aga Khan Academy Maputo with the same tools to become well-rounded individuals.

A new arrival at the Academy in Maputo, Rosa completed the Academies’ Teacher Preparation Programme (TPP) at the Aga Khan Academy Mombasa in December 2019. Calling it one of the most rewarding experiences of her life, she lauds the Problem-Based Learning (PBL) Sessions for pushing her to be a better teacher. 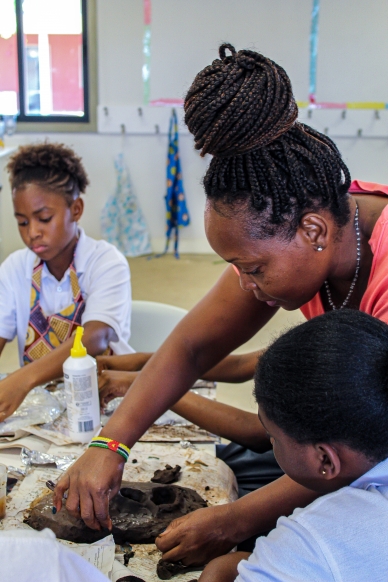 Ensuring students understand the local cultures and traditions in Mozambique, Rosa conducts mask-making classes as a way of self-expression for her students.
Copyright:
AKA / Nazma Kazani
Looking back at her TPP journey, Rosa recounts, “I, personally, have seen myself grow as a teacher and a social individual. The experience has changed the way I approach the teaching and learning process. As teachers, it is possible to change the world through education – all we have to do is believe in that and go do it!”

Drama in the family

She began her now 20-year journey with drama from the nascent age of 14. When her brother and sister were taking up extra-curricular activities such as swimming and football, Rosa’s only interest was joining Mutumbelinhas, a local children’s theatre group. She credits her aunt, who ran the group, for helping her break away from her shy persona. “My aunt put together a play called ‘Flicts’ from a book written by the Brazilian writer Ziraldo. It was such a big change for me because I was a shy kid and through drama, I became a different person,” she recounts.

Since then, the stage has become her life. It is where she met her husband, who is a director and a teacher at Universidade Eduardo Mondlane. It is also the field of work for her son, a theatrical producer and her sister, an actress.

Empowering students with confidence through arts and drama

She hit the ground running in Maputo taking on her role as the Academy’s Drama teacher in January 2020. One of Rosa’s passions include organising workshops promoting self-expression, believing these are key in providing different methods of communication – be it, art, movement, singing, or dialogue and bringing children out of their comfort zone in a safe space. Rosa explains, “Through these workshops, children simply react to the directive and break out of their shell, forgetting that they were shy in the first place.”

Drama goes beyond the stage for Rosa who has been bringing to the fore issues of local cultures and traditions. Over the past few weeks, she has invited many artists to speak about the ethnic groups of Nyau and Mapiko, whereby the children have been learning through the method of mask making and movement classes. Drama has always been more than just performance for Rosa who said, “...it is a very strong tool to build various capacities within young students. It sharpens their communicative, social, collaborative and emotional skills.” 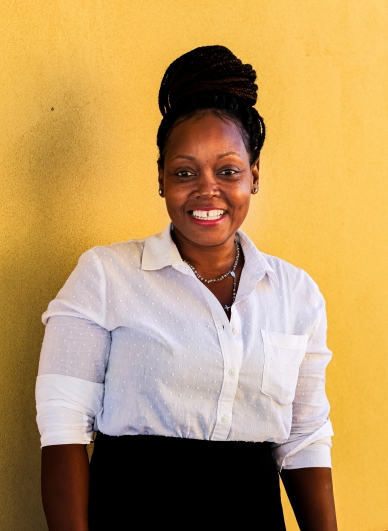 Rosa Jorge is a graduate from the Academies' Teacher Preparation Programme (TPP) and is now a Drama teacher at AKA Mpauto.
Copyright:
AKA / Nazma Kazani
Geared to take on the years to come, Rosa shared that she can already see the seeds of transformation taking root in some students. “I believe that my training in theatre supplemented by the International Baccalaureate (IB) curriculum will present the opportunity to pick up the diamonds in the rough and shine them up,” she explained. “In my opinion, it is important to have Drama as part of a balanced school curriculum in order to develop a socially, emotionally and culturally-aware individual.”

Rosa is a Drama teacher at the Aga Khan Academy Maputo, a programme of the Aga Khan Development Network. The Academy is the third school in a network that plans to include 18 Academies across 14 countries around the world. The Aga Khan Academy Maputo is an International Baccalaureate (IB) World School, offering an IB curriculum that is locally rooted and globally relevant. Admission to the Academy is needs-blind and based upon merit.  The Academy’s programmes are led by experienced local and international teachers. Faculty members are up-to-date with the best educational practices and are committed both to their students’ learning and to their own continuing professional development.

For further information on the Academy, visit: https://www.agakhanacademies.org/maputo