The first 1,000 days of a child’s life, it is said, sets the stage for all future growth. When children receive the “eat, play, and love” their brains need to develop, they are more likely to grow up as healthy, productive adults who contribute significantly to their families and communities.

But there are often many barriers to early childhood development. Income, gender and a lack of access and community support can stop many children from reaching their full human potential.

We spoke with Amina Mwitu, Programme Director of the AKF Madrasa Early Childhood Programme in East Africa, about the importance of early childhood development.

Becoming a role model for kids

Amina Mwitu knows about barriers to education first-hand. “My father managed to finish primary school, but because they were so poor, he could not go to secondary school. My mother dropped out when she was in primary 6.” Despite all odds, her parents encouraged all seven of their children to complete their education. Amina became the first in her family and community to graduate from university.

She then joined the Madrasa Programme, in 1998. “For me, [the programme] presented that platform where I could actually engage with parents, work directly with the teachers, and work directly with the children. In my own local community, I’ve become a role model, somebody available to answer their questions. I’ve been able to prove to them that education does not change who you are, but rather opens your mind to all possibilities.”

“I can talk to them and say: I’m no different from you. I also grew up without shoes. And here I am today. I can actually sit on this other side and tell you that you can become what you want to be in life.”

Part of the Madrasa Programme’s work is to ensure parents understand and support early learning at home and in the community. But in an area where pre-primary education is not the norm – where kids can go to primary school for free at age 7 but have to pay for pre-primary – it can be a hard sell. So Amina and her team use an analogy that makes sense to the predominantly agricultural communities they serve:

You put your seeds in the nursery. You water them. You nurture them. And when they are ready, you take them to the main farm. That’s the same thing with early learning.  This is a period where we want to nurture them, to be able to prepare them for the world. They need to be equipped all around, not just cognitively, but also physically, socially and emotionally, to be able to thrive in the world.

Having been part of the programme for over 20 years, Amina has seen first-hand the way communities and lives are transformed by these interventions.

“The programme is more than 30 years old now. Some of the [earlier] pre-school beneficiaries are now gynaecologists, bankers, lawyers… and whenever we talk to them, they always share that pre-school experience. These [pre-school graduates] now number in their hundreds of thousands throughout East Africa. Some of them probably would have dropped out in primary school, but now they have secondary schooling, and university. That’s a powerful story, and we know that it’s going to bring about a lot of changes in their own families and communities.”

Transforming the lives of teachers

The Madrasa Programme also transforms the lives of the teachers who come through its doors, by training existing and future teachers.

The programme addresses the gap in qualified educators with training on practical, hands-on, child-centred approaches that contribute to the child’s holistic development.

But the teacher training doesn’t just benefit the child, it benefits the teacher and their families as well.

“After training and mentorship, these teachers are able to deliver effectively in the classroom,” says Amina.  “They’re able to engage with the children. They’re happy in what they’re doing. They are earning an income that goes back to support their own families. They have found a profession. Somebody who may be a housewife or a drop-out, all of a sudden has a career in life. For me, that is also very powerful.” 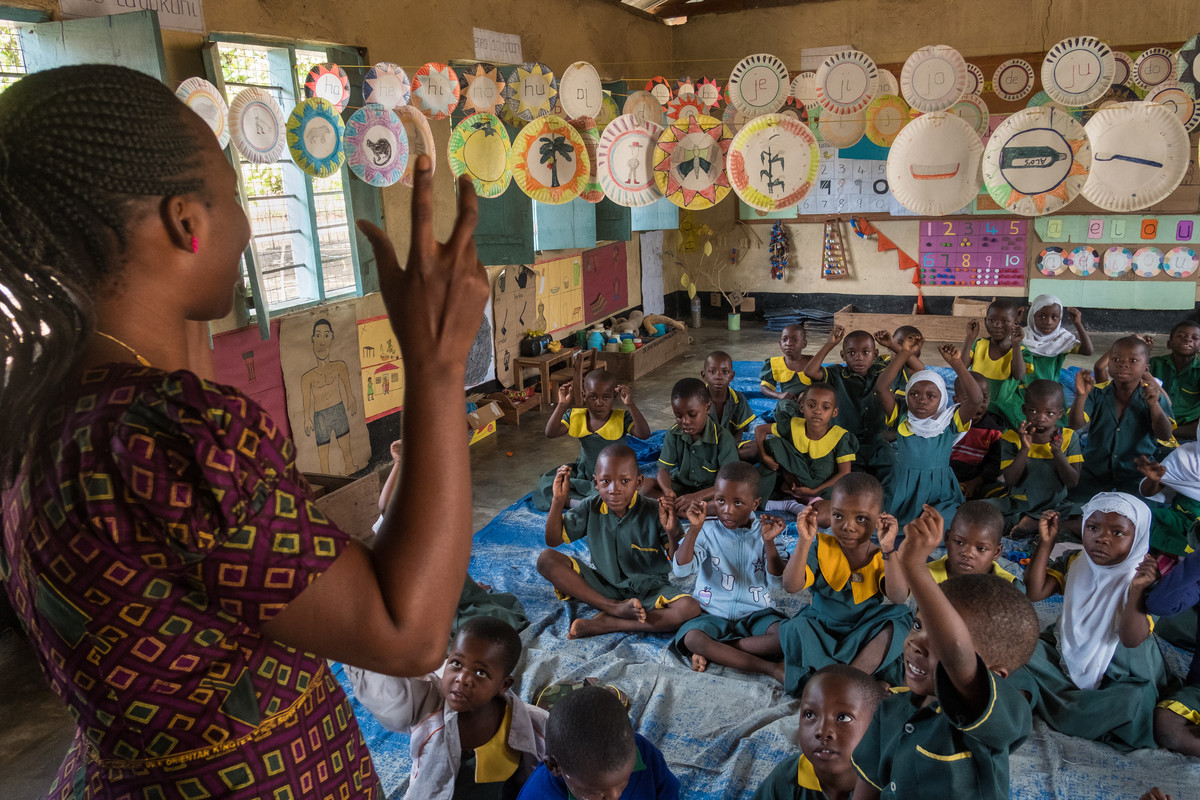 The Madrasa Programme has trained thousands of new and in-service pre-school teachers in Kenya, Tanzania (photo) and Uganda, helping them to engage more effectively with their young learners.
Copyright:
AKDN / Lucas Cuervo Moura

While the Madrasa Programme has transformed lives in the classroom, it has lifted up women in the community as well.

“When the programme started, we insisted, through our criteria, that there had to be at least 30 percent women participating in our school committees,” says Amina.

“Today, over 60 percent are women. And they’re not just there as co-opted members. They are chairpersons, vice, treasurers… and beyond the programme, they’re also leaders in other groups. They have a voice. They can advocate for the changes they want to see in the community. For me, that is something very powerful.”

While she does consider the work of the Madrasa Early Childhood Programme over the last three decades to be successful, Amina says its work has only begun.

“Yes, we have been able to achieve much, particularly in the counties where we’re working, but that’s really a drop in the ocean. In some counties, we’ve just been able to work with 15 percent, 50 percent, so there is still work to be done. Support is required.”

This story was originally published on the Aga Khan Foundation Canada website.