Water connects every aspect of life. Access to safe water and sanitation can quickly turn problems into potential – empowering people with time for school and work, and contributing to improved health for women, children and families around the world.

According to Water.org, a nonprofit organisation that aims to bring clean water and sanitation around the world, 41 per cent of the 50 million people in Kenya are continuing to rely on unimproved water sources, such as rivers, ponds and shallow wells. This is mainly seen in rural areas, such as the Junju settlement in Kilifi, Kenya, which caught Ambuj Ranjan’s attention. Through his mother who is researching Junju for her PhD, Ambuj, a Diploma Programme 2 student at the Aga Khan Academy Mombasa, learnt how the people of Junju were drinking untreated water. This, he said, compelled him to find a solution to support the people in Junju with clean and safe drinking water.

“It was only when I visited the village personally that I understood how challenging the living conditions were” Ambuj said. “I had to do something, even if it was something small-scale.”

Using cost-effective and easily available materials like gravel, stone chips, sand and activated charcoal, Ambuj created a water-filtration system that purifies contaminated water to be drinkable. Tested and declared fit for consumption by in independent laboratory, river water takes four hours to seep through and be made clear when added to the filtration system. Following positive feedback from the people of Junju, Ambuj went on to send four additional filtration systems, which are now being used by roughly 60 people in four dwellings in the area.

“The filtration system is a very new thing to the people of Junju,” Ambuj said. “They’re used to drinking poor quality water that is murky, and when they saw water that was actually transparent, their expression was something that can’t be put into words.”

In a letter of appreciation, the Assistant Chief of Junju thanked Ambuj on behalf of the community who benefited from his 18.5-litre water filters and wished him the best of luck for his future endeavours. 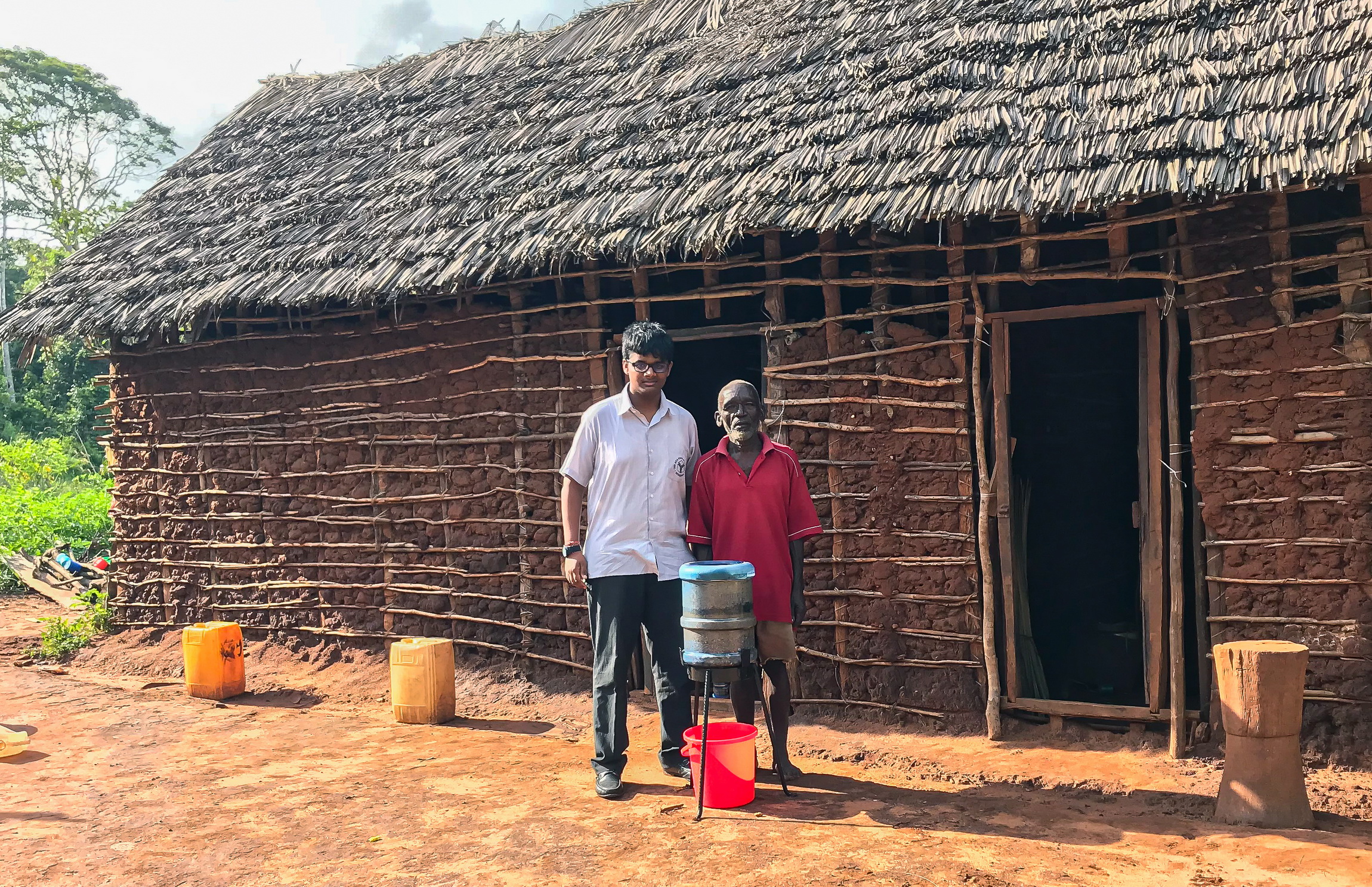 Ambuj Ranjan, a student at the Aga Khan Academy Mombasa, with a member of the Junju settlement in Kenya and his water filtration system.
Copyright:
AKDN

“The community is thankful for his project and his efforts to the Junju community,” the letter said. “We found this project to be very interesting and wish (Ambuj) all the best.”

Collaborating with his brother and teachers, Ambuj said he hopes to further his research in order to provide sustainable, cost effective and portable versions of this filtration system to the people of Junju. His science teachers and mentors, Charles Gumba and Lucy Mwandawiro, said Ambuj emulates various Aga Khan Academies Learner Profiles, specifically that of a leader and steward.

“I think what is outstanding about Ambuj is the way that he has taken his learning and made it come alive by taking it back to the community,” Lucy said. “This project was just his own initiative – he’s not being assessed anywhere, which is amazing. I guided him to think through the filtration process, such as what kind of filter to use and where to get the water tested so it’s acceptable. I think for him, growing up as a person, he’s very passionate about society and wants to bring change, and he’s going out of his busy schedule to do so.”

In the meantime, Ambuj is tracking the progress of his project with the support of two residents from Junju, who have reported that the systems are being used regularly with proper care. Ambuj said the community has also been trained to harvest rainwater and have been informed about the importance of using water sanitation systems for day-to-day activities. While he is constantly receiving positive feedback about the filtration system, Ambuj said that tackling the issue of water sanitation is only the first step in addressing other problems concerning education, health and overall quality of life.

Ambuj is a student at the Aga Khan Academy Mombasa, a programme of the Aga Khan Development Network, and was the first school in a network that plans to include 18 Academies across 14 countries around the world. The Aga Khan Academy Mombasa is an International Baccalaureate (IB) World School, offering an IB curriculum that is locally rooted and globally relevant. Admission to the Academy is needs-blind and based upon merit. For further information on the Academy, visit: http://www.agakhanacademies.org/mombasa