The University of Central Asia (UCA) has opened campuses at high altitude sites in Naryn, Kyrgyz Republic (2016) and Khorog, Tajikistan (2017), and the Tekeli campus in Kazakhstan is currently in the planning phase.

The inaugural campus of the University opened in Naryn, Kyrgyz Republic in September 2016. It is the first phase of a larger vision for the 252-hectare site, gifted by the Kyrgyz Government. Classes commenced for the inaugural class of 71 undergraduates at the Naryn Campus on 5 September 2016. Phase I includes a 13,927m² space for 150 students featuring state of the art classrooms, library and laboratories; secure, modular student dormitories and faculty and staff residences. Its international standard athletic facilities, including two tennis courts and a football pitch are open to the public and UCA’s sports dome offers indoor athletics year-round. When the final phase is complete, the campus will accommodate 1,200 students and span 125,000m².

Arata Isozaki, the renouned Japanese architect, and designer of the University of Central Asia (UCA), has won the coveted Pritzker Architecture Prize for 2019.
Copyright:
UCA

In 2015, UCA formally secured a loan to advance construction. Alongside a US$64.4 million commitment from the Aga Khan Development Network (AKDN), including US$7.5 million from the Aga Khan Foundation, Overseas Private Investment Corporation (OPIC), the United States Government’s development finance institution has extended US$30 million to complete Phase I construction of its Khorog campus.

UCA’s campus in Tekeli, Kazakhstan is located in the Almaty region, 40 km from the regional capital Taldykorgan. To prepare the campus site for construction, UCA has undertaken extensive grading works. About 1.6 km of retaining and decorative walling have been constructed to date. Detailed design works are complete for Phase I of the Tekeli campus. Works will be tendered to local and regional contractors for pre-construction works. UCA then expects to proceed with detailed campus design and some site preparation works. 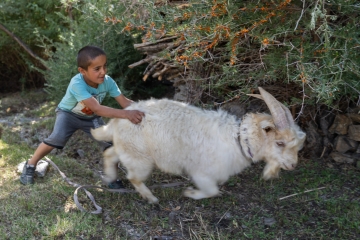