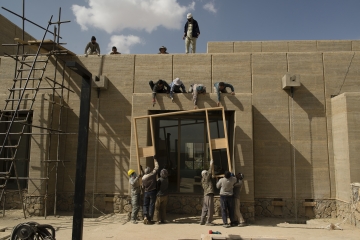 The Hospital’s special low-impact, rammed earth architecture is designed to be not only culturally sensitive to the surrounding area, but also climate-friendly, durable and seismic-resistant.
AKHS
AKHS’s energy efficient buildings

The Aga Khan Health Services (AKHS)'s architects and engineers have a longstanding tradition of working together to build facilities that both fend off the worst of the weather and make full use of natural light and ventilation. In turn, all such features reduce energy needs for heating, cooling and lighting. New facilities aim to satisfy the requirements for Excellence in Design for Greater Efficiencies or “EDGE” certification.

Energy efficiency is a criterion for all major equipment. Better energy solutions for fixtures and fittings, and energy and water consumption are also continually being sought.  Typically, AKHS hospitals use LED and sensor-responsive lighting, water efficient taps, toilets and Energy Star-rated equipment and appliances.

For newer projects wherever space permits, engineers install rainwater harvesting mechanisms to make the most of rainfall. Treated water is also routinely used for flushing toilets and irrigating grounds.  Some facilities have reverse osmosis plants to produce the highest quality drinking water on site – preventing the need to transport potable water, which comes at a high cost to the environment. Plans are in place to install these features at all locations gradually. Wherever possible, and generally for larger projects, heat from generators and other equipment is being considered for heating water and supplementing heating, too.

In terms of solar power, AKHS’s investment in this area really took off in 2016, when the Aga Khan Health Services in Afghanistan with partners were constructing the then new hospital in Bamyan. The site for this hospital was off the electric grid requiring creative energy solutions. While solar looked promising in the long-term, the estimated costs for installation were very high.  However, the projections seemed worth pursuing. Once funding was secured, a 400 KW solar energy system was installed, which at the time was the largest within AKDN. Fortunately, the experiment worked out far better than expected. In this region, summers provided up to 14 hours sunlight a day. Through this experience, AKHS learned what is now obvious: hospitals consume most energy during the day (night use is restricted to lighting and emergency procedures); and as such, solar is a particularly good solution for health operations. From a financial perspective, it will take about 6 years to recoup the costs of the Bamyan investment where solar currently provides 50-60% of all energy needs. As this installation generates more energy than can be saved, plans are underway to add more and better batteries which will reduce fossil fuel use even further.

Since the Bamyan experience, every AKHS installation has explored and aimed for the maximum possible use of solar energy.

AKHS has won two awards for its solar projects including from the Prince Sadruddin Aga Khan Fund for the Environment and the Access 2 Energy (A2E) award for the Health Centre in Singal in Northern Pakistan and the Medical Centre in Mwanza in Tanzania, respectively. 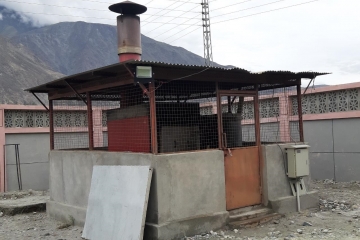 Where possible, AKHS uses options such as sterilisation/chemically treating or burying waste in preference to incineration. For waste that has to be burned, AKHS ensures that each incineration cycle uses the full capacity of the incinerator, limiting wasted space.
AKHS
Incineration

Hospitals and health facilities use incinerators to burn hazardous waste. AKHS takes special care to ensure that it conducts incineration in the most energy-efficient and environmentally friendly way, which starts with training. Without training and support, there is a tendency of operators to burn more waste than they should.

Waste management begins with being conservative with what one uses in the first place, but then also segregating waste. Where possible, AKHS uses options such as sterilisation/chemically treating or burying waste in preference to incineration. For waste that has to be burned, AKHS ensures that each incineration cycle uses the full capacity of the incinerator, limiting wasted space. This practice maximises the use of energy and greatly reduces the amount that is burnt.

Given the generally poor practices in this field, AKHS has started offering freed-up space in its incinerators to other health facilities. In the instance of Gilgit Medical Centre in Northern Pakistan, this facility offers incineration services to private health operations as well as the regional government hospital.  In the process of these collaborations, better waste management by all partners has been the result. A further incinerator is being installed to expand the offer of these services to facilities in three districts within a 100 miles and to widen better practices in the process. AKHS has calculated that the environmental benefits far outweigh the cost of transporting waste to this central facility. AKHS hopes to continue to expand best practices in waste management and incineration within the countries it works in.

As technology improves, AKHS replaces older units with those that are better designed in terms of energy use and air pollution. AKHS’ latest installation at Dar es Salaam is one of the very highest of fuel-efficient designs rated for medical, municipal and animal waste incineration and is expected to result in next to no direct pollution. For example, at a burn rate of 200kg/hr, the following emissions are expected: CO₂ 5%, O₂ 6%, SO₂ 6%, H₂O 29%, N₂ 54%, smoke 0% and odour 0%. 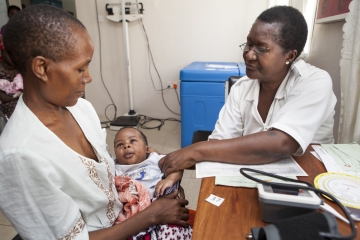