Music and arts education are at the core of the Music Programme’s mission, and represent a central focus of its cultural development investments. AKMP pursues its educational objectives through collaborations with a network of institutional partners both inside and outside the Aga Khan Development Network (AKDN) whose mission, resources and expertise complement its own. 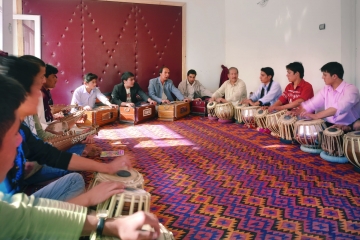 The training programme exemplifies the Aga Khan Trust for Culture’s focus on linking the revitalisation of intangible and tangible cultural heritage: in both Kabul and Herat, music instruction and regular concerts have taken place in historic buildings that are part of sites conserved and rehabilitated by the Trust’s Historic Cities Programme. Students have studied a variety of local instruments—rubab, tanbur, dutar, tabla, dilruba, and others—as well as singing. Many graduates have gone on to become prominent performers in Afghanistan’s music scene. While initial enrollment in the training programme was all male, efforts have been made to identify female students. Young women are now enrolled in different courses, with the expectation that female graduates of the programme will, in time, contribute to the continuation of a rich Afghan tradition of music making by and for women.
icon 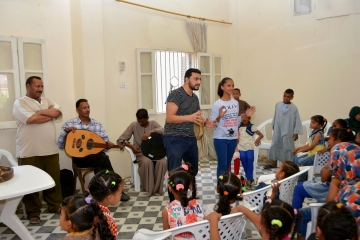 Through inclusive arts training programmes open to all, Al Darb al Ahmar Arts School and Aswan Music Project serve several functions: they raise the level of awareness of the value of the arts and its role in community and economic development, and they provide avenues towards meaningful work. Al Darb Al Ahmar Arts School (DAAS) serves students aged 8-18 through its vocational approach to arts training.

Classes are offered in percussion, brass and woodwind instruments (trumpet, trombone, saxophone, clarinet), accordion, oud and solfège as well as in theatre and circus arts.

Aswan Music Project (AMP) provides young people up to the age of 25 with free classes in traditional Arab, Egyptian, and Aswanese music, focusing on oud, percussion, and tanbura, with instruction also available on traditional woodwind instruments such as nai, kawala, and arghul.

These two projects are supported by the Embassy of Switzerland in Egypt in cooperation with the Om Habibeh Foundation and the Aga Khan Foundation – Egypt. Both projects were established with full involvement of the communities they are designed to serve. 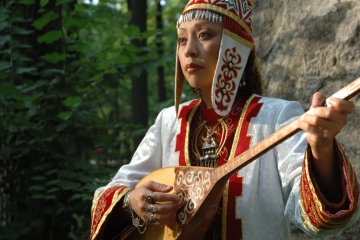 Murager was supported by an array of curriculum materials, a yearly teacher training seminar, and the ongoing production of high quality musical instruments (dombras) for use by students engaged in the programme. The target audience for Murager was not future professional musicians, but future audience members, based on the idea that music and art can only flourish in a society that understands and values them. By 2014, Murager was operational in some 70 secondary schools throughout Kazakhstan, and had produced curriculum materials extending from first to eleventh grades, with more than 10,000 students nationwide having enrolled in a Murager class. In 2013, Kazakhstan’s Ministry of Education approved Murager as an official experimental music curriculum for the 4th grade, marking the beginning of the Ministry’s phased assumption of responsibility for the production of textbooks, curriculum materials, and teacher training courses.
icon 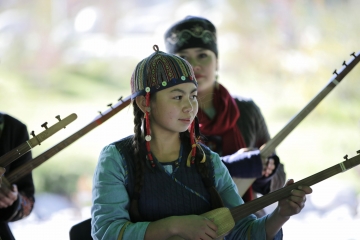 Centre Ustatshakirt, the Music Programme’s longstanding partner in Kyrgyzstan, is based in Bishkek and operates nationwide in collaboration with local educational institutions ranging from primary schools to universities. The centre’s flagship programme, Umtul (Aspiration), provides primary school students with an aesthetic component of their education through group instruction on the popular Kyrgyz stringed instrument komuz.

Umtul also includes a nationwide network of theatre clubs in secondary schools whose theatre productions underscore the values of cultural pluralism. Umtul has been adopted in 80 schools throughout Kyrgyzstan’s seven regions, and presently serves more than 7,000 students. A complementary programme, Muzchyrak, offers seminars and short courses for music teachers that focus on improving performance and pedagogic skills in working with traditional music and musical instruments in a school environment.

Students trained by Centre Ustatshakirt are often called upon to perform programmes of Kyrgyz traditional music at public events throughout Kyrgyzstan and internationally, and are assuming leadership roles in a new generation of Kyrgyz musicians. 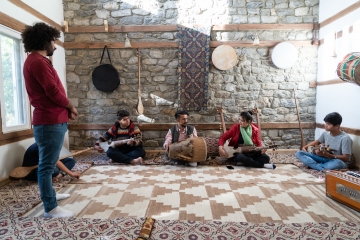 The Leif Larsen Music Centre opened in 2016 as a collaboration between Aga Khan Cultural Services Pakistan, the Royal Norwegian Embassy in Islamabad, and the Aga Khan Music Initiative.

Named for the late Norwegian ambassador who died in a tragic helicopter accident in the region, the Leif Larsen Centre serves the local community by providing free music lessons for young people on a range of musical instruments (rubab, xighini, dadang, damal, flute, and a local version of the sitar) and providing them with performance opportunities both in the Gilgit-Baltistan region and beyond.

CIQAM, a social enterprise developed by Aga Khan Cultural Services Pakistan and the Royal Norwegian Embassy that trains women in carpentry and other trades, constructed the facility in a vernacular style using local materials.

Training musicians to fulfil a niche role in the cultural services sector serves a dual purpose, demonstrating that music can be a source of livelihood as well as a living cultural resource and potential source of cultural tourism.  Leif Larsen Centre’s spirited enterprise offers an exemplary case study of how musical heritage preservation, production, and dissemination can serve as a vehicle for sustainable development. 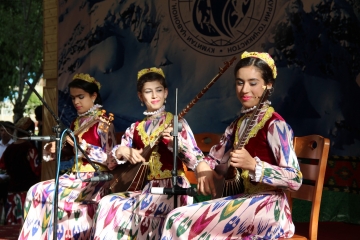 Khunar Centre, the Music Initiative’s partner in Tajikistan, is based in Khujand and offers a master-apprentice (ustod-shogird) training programme to children and young adults throughout northern Tajikistan’s Sogd Region as well as in Darvoz (GBAO) and Shakhrinav (Gissar Region).

Academy of Maqom: Founded in 2003 by musicologist and tanbur-sato player Abduvali Abdurashidov, the Academy of Maqom focused on the revitalisation of local forms of maqom, the classical, or art music tradition that, in various local forms and dialects, has been cultivated in urban cultural centres throughout North Africa, the Middle East, West Asia, and Central Asia.

The Academy’s rigorous five-year training programme produced seven young master musicians who have all assumed a leading role in teaching, performing, and composing Tajik music. The Academy also undertook the preparation of a critical scholarly edition of Shashmaqom, the repertory of six vocal-instrumental suites whose origins and development are historically linked to the cities of Bukhara and Samarkand, which was published in Tajikistan in 2016. The Academy’s Grammy-nominated recording of Shashmaqom appears in the 10-volume CD-DVD anthology Music of Central Asia (Smithsonian Folkways, 2006).