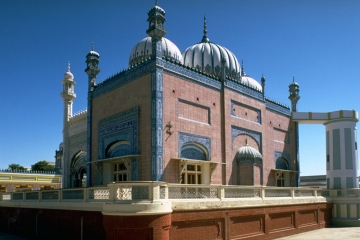 The late Rais Ghazi Mohammad, the landlord of a large estate, began this project in 1932 in Bhong village, the most important of the scattered villages on his vast property. The mosque was to be the most glorious building in his palace compound which also included a smaller mosque, a madrasa and rooms for students. The work of specialists gathered from all over Pakistan and India (master masons and craftsmen from Rajasthan, calligraphers and painters from Karachi), the compound was designed and constructed over a period of nearly 50 years. 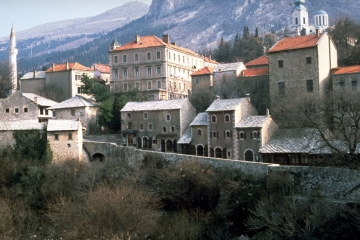 By the 1960s, the 16th-century historical core of the town of Mostar was physically deteriorated and commercially stagnant. It has since become revitalised and reactivated as a thriving business centre. Stari-Grad, the agency in charge of this restoration project, is a semi-autonomous organisation approved and subsidised by the Ministry for the Protection of Monuments and Nature of the Republic of Herzegovina in Sarajevo. Beginning in 1977, Stari-Grad spent three years documenting the historic centre. 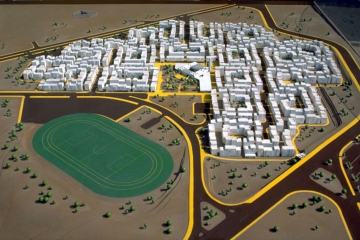 This low-income residential community for 25'000 people consists of over 4'000 units organised around a large central square in which the mosque, markets and festival hall are located. Surrounding this central area on three sides are six housing clusters made up of parallel rows of attached four- and five-storey apartment blocks separated by pedestrian streets that give access to all buildings. Entrances face each other and open staircases act as communal balconies. 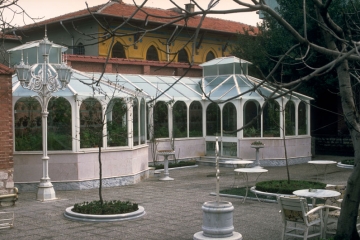 Many of Istanbul's 19th-and-20th century kiosks and pavilions in the royal parks along the Bosphorus were in bad condition and the remaining old residential districts of the city were in disrepair and under threat of demolition. In 1974 the Touring and Automobile Association began its work in the residential district near the Kariye Museum, repairing and painting the faåades of 12 houses, replacing the cobbled streets and restoring the local fountain. In 1979 the Association leased from the city certain buildings and parks to restore, furnish and put to profitable use. 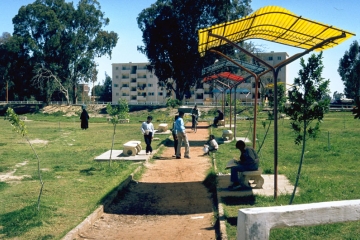 This project represents a critically important departure in the development of low-income housing in Egypt. It has channelled public housing subsidies toward local initiative and self-help. The effort involves the upgrading and extension of two existing settlements, Hai el-Salaam to the north of the city of Ismaïliyya, and Abu Atwa to the south. 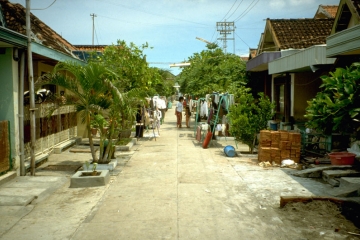 In the urban areas of Indonesia, most of the low-income population lives in kampungs. Almost one-quarter of the city area of Surabaya, an industrial metropolis with a population of about 2.5 million, is covered by them. Kampung Kebalen has an average density of 800 people per hectare living in densely packed single-storey wooden houses within networks of narrow alleys. The average monthly household income is US$ 35 to US$ 65. Potable water, electricity and sanitation were lacking. Flooding occurred during the rainy season. 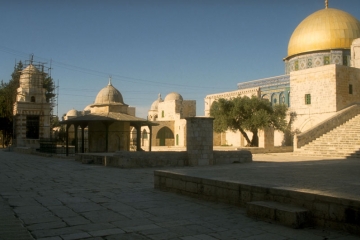 The al-Aqsa Mosque, originally built in 711 A.D., has not changed significantly in size or plan since the 12th century. The client for the current restoration is a semi-governmental body established by Jordanian law. In 1969, at the time its work commenced, the precinct of the mosque and the Dome of the Rock, known as the Haram al-Sharif area, as well as the great monuments themselves were in a sorry state of disrepair. Most noticeably, the dome of the mosque had been reconstructed in concrete and covered with anodised aluminium instead of the original ribbed lead sheeting. 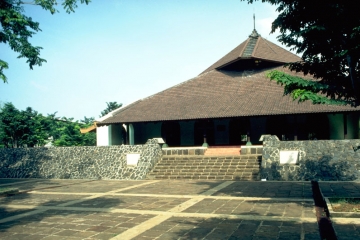 Named after the donor of the land it occupies, the mosque was designed in the Indonesian Hindu-Javanese architectural tradition, yet is well adapted to the Muslim form of worship. The mosque is square in plan, and symmetrical on both axes with deep verandas on all four sides. In this mosque, traditional Javanese idioms have been skilfully re-interpreted to produce a modern regional architecture compatible with the best indigenous work. 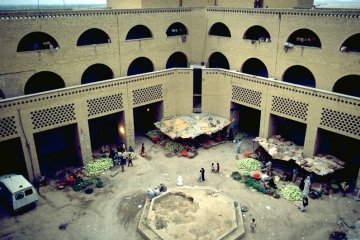 The inhabitants of this satellite town are the employees of a sugar processing concern nearby. This company's long range plans are to provide its workers not only with individual row housing, but with communal facilities and infrastructural services, to include a shopping centre and bazaar, a mosque, a community and cultural centre, a school, sports facilities, a bus station and a bridge to the old town across the river. The development is intended to revitalise the old town and to accommodate expansion generated by industrial growth in the region. 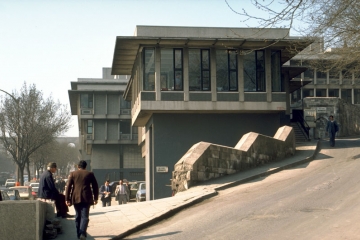 In the 1960s when this complex was designed and in construction, Turkish architects were engaged in a reassessment of the tenets of the Modern Movement, leading them to seek a new regionalism" in architectural expression, as an answer to the dominance of the International Style. This office complex reconciles both theoretical positions. 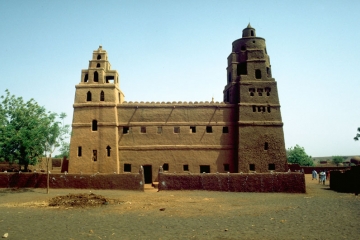 The first version of this mud brick Friday mosque, begun in 1962, took the form of a rectangular hypostyle prayer hall with the projecting mihrab as the only secondary volume. In subsequent repairs a central dome was added and four corner towers built. Each tower is an individual sculpture with banded tapering walls becoming gradually more elaborate toward its pinnacle. Crenellations of half circles decorate the parapets and rounded cones mark the corners. Mud brick structures require cyclical maintenance, alterations and repairs.