SOUNDING ISLAM IN CHINA: THE GEOGRAPHIES OF RITUAL PRACTICE IN RURAL UYGHUR SOCIETY 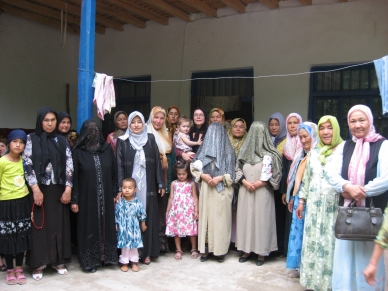 Büwi after a ritual in southern Xinjiang.
This preliminary case study calls attention to need for a more systematic understanding of local Islamic practices across Central Asia and China, and suggests that a focus on sound and style can provide important insights into the global flows of Islamic ideology and practice. It considers geographies of sound and style in rural ritual practices amongst the Uyghurs whose homeland lies in Northwest China, the Xinjiang Uyghur Autonomous Region.

The material discussed arises from fieldwork in a Uyghur village in the south of the Xinjiang region in summer 2009 when I worked with a group of village ritualists called büwi. Such informal groups are numerous and widespread. Folklorists in Urumchi have documented hundreds of groups across the region; probably in every locality (a group of villages) there is an active group. Many groups meet for weekly meetings. They also gather for a tünäk (vigil) after a death at the home of the deceased. They may be invited to people’s homes to recite and pray in order to dispel some misfortune or illness, and they perform large-scale hätmä rituals during the month of Barat which are concerned with salvation, and include recitation of the Qur’an, sung prayers and dhikr.

This paper focuses on a hätmä ritual recorded in August 2009, which is normally conducted at night during the month of Barat. Although the büwi say that it is a complete recitation of the whole Qur’an, this is actually a succession of short prayers (du’a) contained within the Qur’an. The texts emphasise themes of salvation and the Day of Judgement (qiyamät küni); they include prayers for the Prophet, glorification of God, and aside from a few longer sections of solo recitation, they consist of short phrases repeated rhythmically many times (dhikr). The skill, knowledge and power of the group leader are particularly striking. This is the most senior büwi present, who sits in the middle of the back wall – the place reserved for the most honoured guest – flanked by her closest disciples. During the course of the two-hour ritual, she leads the chanting, controls the order of prayers and the number of repetitions of dhikr. She points to individual women, usually her disciples, and orders them to recite particular passages. Crucially she controls and manipulates the emotional intensity of the event, at points ordering the group to move inwards, to concentrate their spiritual force, in order to achieve an emotional peak during which the women weep copiously, and some enter a state of trance.

Subhanallahi wa bihamdihi subhanallahi ladheem. Glory to God, he is above all imperfections, praise and gratitude to him, glory to the great God.

These büwi do not identify themselves as Sufis, and have no formal links to established Sufi lodges (khaniqa), but structurally the links between their practice and what we know of Sufi sama rituals in this region are strong. The Qaderiyya order were very active in the Ferghana Valley (Djumaev 2002:942), and they put down strong roots in the neighbouring Kashgar-Yarkand region. Some of the major lodges of Xinjiang trace their individual genealogies back to the seventeenth century when Sufi orders flourished under the patronage of the Khoja dynasty of Kashgar, while others were founded more recently by Uzbek Sufi sheikhs who had fled religious persecution in Soviet Central Asia in the twentieth century (Zarcone 2002:534). Transmission is not exclusively gendered. Sufi lodges in Xinjiang sometimes have women’s rooms attached to the lodge and women perform sama rituals there. Wives or daughters of religious men learn from husbands or fathers, and so transmission out of the lodges into what is here recognized as exclusively women’s practice seems highly likely.

Another insight into the form of this ritual helps to situate these practices not only within the wider picture of Central Asian religious practices but within contemporary ideological flows emanating from the Middle East. Listening to the longer sections of Qur’anic recitation within this ritual, there is an audible contrast between the local recitation style used by the group leader, and an impressive performance by one younger büwi, whom I will call Aygul, who learned to recite the Qur’an from a mullah (a male cleric) in the nearby town of Kashgar. Her recitation is recognizably based on the Egyptian mujawwad public recitation style, exemplified by the renowned Egyptian reciter Abd al-Basit Abd al-Samad. This demonstrates how wider trends in Islam are audibly penetrating remote villages on the fringes of the Islamic world, and in perhaps unexpected ways. Michael Frishkopf, building on seminal work by Kristina Nelson (2001), identifies a stylistic and ideological distinction between ‘Egyptian’ and ‘Saudi’ recitation styles. The Egyptian mujawwad style is linked to public star performers, who are admired for artistry, and close to the world of music. This style was dominant in the Arab world until the 1970s. The Saudi tilawa style is performed by preachers and scholars; it is close to the world of politics, and represents and promotes reformist ideology.

(Allah) Most Gracious!
It is He Who has taught the Qur'an.
He has created man:
He has taught him speech (and intelligence).
The sun and the moon follow courses (exactly) computed;
And the herbs and the trees - both (alike) prostrate in adoration.
And the Firmament has He raised high, and He has set up the Balance (of Justice),
In order that ye may not transgress (due) balance.
So establish weight with justice and fall not short in the balance.
It is He Who has spread out the earth for (His) creatures:
Therein is fruit and date-palms, producing spathes (enclosing dates);
Also corn, with (its) leaves and stalk for fodder, and sweet-smelling plants.
Then which of the favours of your Lord will ye deny? …
(http://www.oneummah.net/quran/book/55.html, accessed 28/6/12) 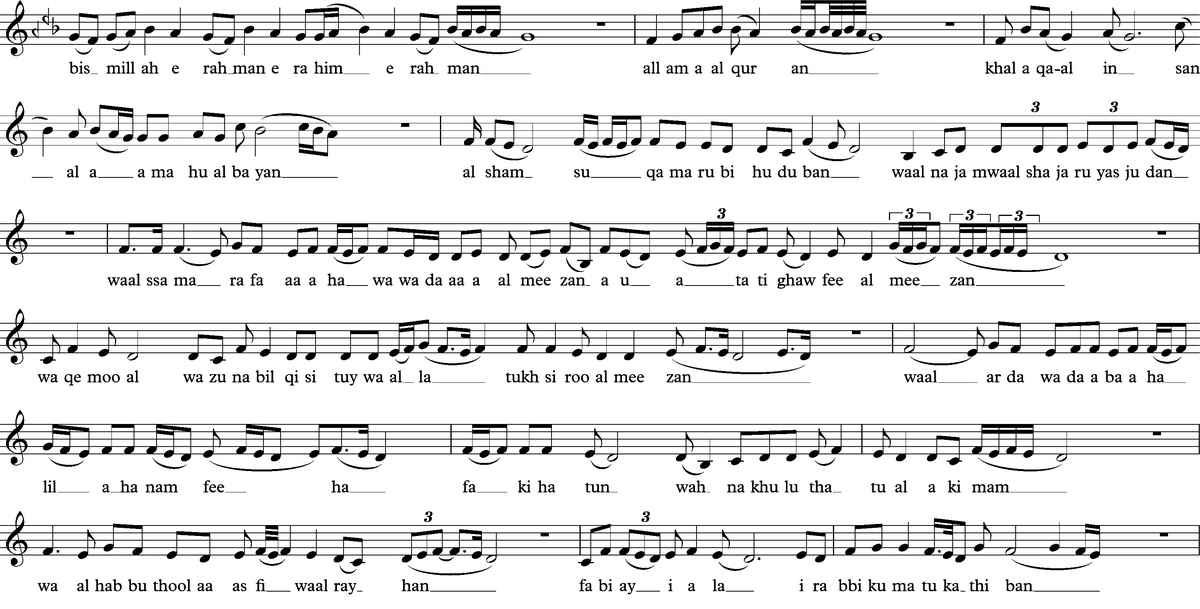 According to the büwi, many people memorise this surah in Xinjiang because of a saying attributed to the Prophet that it removes hypocrisy from the heart. If we listen to the style of the recitation we can hear several aspects which are typical of Egyptian mujawwad, notably the close relation to the mode of Bayyati, the prominent use of melisma, slow pace, and nasal timbre.

In our conversations, Aygul laid great emphasis on notions of ‘correct’ practice. She said that their recitation, their performance was better now than before, it had greater power. I believe that this reaching out to correct practice from the Middle East is indicative of wider trends in Islam in Xinjiang, and that it is a reaction to state policies, as religious practitioners seek to compensate for their current marginalisation (and even criminalisation) at the hands of the state through recourse to models of ‘correct practice’ including these sounds of outside orthodoxy. It is perhaps significant that the orthodoxy we can hear in this case is not the style of the Saudi-led ‘New Islam’, the feared Wahabbism of Chinese reports, but rather the more ‘musical’ traditional Egyptian star performer style of mujawwad.

Frishkopf, Michael. 2009. Mediated Qur’anic Recitation and the Contestation of Islam in Contemporary Egypt. In Laudan Nooshin (ed.). Music and the Play of Power in the Middle East, North Africa and Central Asia. Aldershot: Ashgate Press. 75-114.

Nelson, Kristina. 2001. The Art of Reciting the Qur’an. Cairo and New York: The American University in Cairo Press. 2nd edition.