EVOLUTION OF MUSICAL INSTRUMENTS WITHIN LOCAL PERFORMANCE SCHOOLS IN TURKMENISTAN 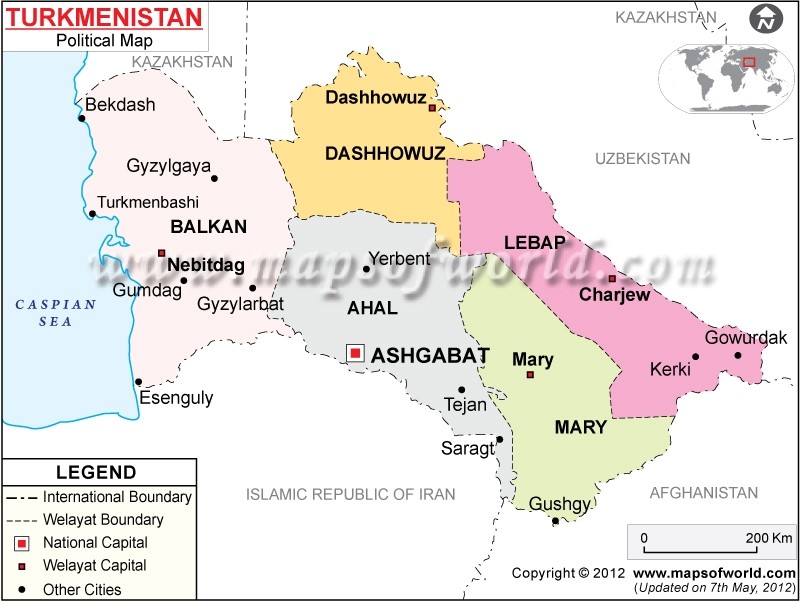 Turkmenistan is situated in the southwest of Central Asia. Eighty percent of its territory is covered by the Karakum Desert. The desert environment and arid continental climate have significantly influenced the cultures of the Turkmen tribes. Life conditions, formed in the course of history, determined the division of the Turkmen people into different tribal groups. This division led to the formation of different musical schools called bagshychylyk yollary (lit. pathways of bagshy art). We know of five main schools identified with particular Turkmen tribes or landscape features: Salyr-Saryk yoly, Damana yoly, Ahal-Teke yoly, Yomut-Goklen yoly and Choudur yoly (Djikiev 1991:14). In the first half of the 20th century a new classification of music schools was introduced, based on regional division, rather than distribution of tribal groups: Mary yoly and Lebap yoly, in the east of the country, replaced the former Salyr-Saryk school, Ahal yoly, Balkan yoly and Dashoguz yoly, in the south-central, west and north-central respectively, replaced the former Damana yoly, Ahal-Teke, Yomut-Goklen and Choudur schools. Each regional school is characterised by its own local peculiarities, manifested by the distinctive ways of playing folk music, the genres performed and the types of instruments employed.

The region of Mary, in the southeast of Turkmenistan, is the site of ancient Merv, an emerald in the treasury of world culture (Masson 1991:3). Imagery of musical instruments on the terracotta statuettes of ancient Merv is evidence of the high level of its music art in the past. Two groups of instruments are depicted on terracotta statuettes: stringed and wind. The stringed group is represented by the lute. This instrument was to be found in Asia much earlier than Greek culture. Numerous instruments on Merv’s terracotta statuettes tell us about the existence of multiple contacts with other countries (Pilipko 1969:24). They provide a valuable record of the earliest development of musical culture among the Turkmens’ predecessors and its connections with more recent phases of history.

Popular in Mary is the folk wind instrument tuiduk which is played both solo and as an accompaniment to singing and dance. The tuiduk has several variations: the gargy-tuiduk (80 cm in length), dilli-tuiduk (12 cm) and the now obsolete gosha-dilli-tuiduk (twinned dilli-tuiduks) (Sarianidi 2002:239). Although all are made from reed, they vary in sound and appearance. The gargy-tuiduk has a husky timbre characterised by a distinctive whistling, while the dilli-tuiduk sounds piercingly and brightly in the high register. Singing to the accompaniment of the tuiduk, as well as the playing of tuiduk melodies, demands great technical skill (Djumaliev 1973:10). Performance on the tuiduk is also found in the Lebap region, in the northeast of Turkmenistan.

The Mary yoly is also famous for its sophisticated singing style. The bagshy of the Mary region have a good command of the dutar, though their playing differs greatly from that of musicians from the Ahal region. Most of the Mary yoly dutar pieces are based on sung prototypes.

Old Nisa is a great historic heritage of the Turkmens. The significance of Nisa arose from its geopolitical and cultural status as an inner centre of the Parthian empire. Archeological excavations of ancient Nisa, which led to the discovery of a wealth of material, including furnishings and works of art, testified to the magnitude and glory of ancient Parthia. Among them there were finely executed rhytons of extraordinary beauty (Pugachenkova 1982:5). These were used primarily for ritual ceremonies (Pugachenkova 1959:34). Numerous images of dancers, musicians and musical instruments depicted on the rhytons indicate that music was an important part of such ceremonies in Parthia. Among these images are stringed, wind and percussion instruments. The stringed group includes the zither and lute, and the wind group the avlos and pan-pipe. All these instruments circulated in the Middle East and pre-dated ancient Greek culture (Vyzgo 1980:30-1).

The Parthian tambourine is similar to the modern percussion instrument of the Turkmens, dep. On Nisa’s rhytons women play tambourines as an accompaniment to dance. Nowadays in the Lebap region of Turkmenistan there still exists a tradition of women’s playing on percussion instruments. For example, during celebration of Novruz, women cook a ritual course “Sumelek” from the grains of wheat grown at night. The ceremony of cooking is accompanied by singing and dancing (chapak) to the accompaniment of the dep. The way the instrument is held by the performers – slightly to one side – is typical of the position of the tambourine in the hands of Parthian musicians. Thus, the Turkmen dep appears to be a descendant of the tambourine featured on Nisa’s rhytons which in turn derives its origins from the Sumerian tambourine.

Ahal yoly is distinguished by a high level of musicianship on the dutar. Outstanding representatives of this school include Amangeldy Gonibekov, Shukur bagshy, Tachmammet Sukhangulyev, Mylly Tachmyradov, Purli Saryev, Chary Tachmammedov and Yagmyr Nurgeldiev. Their repertoire is remarkable for its highly developed forms, rich imagery and technical complexity. The authorship of most dutar compositions is unknown, although the history of their creation is recounted in a number of folk legends. The Ahal region, in the south-centre of the country, has been the source not only of short dutar pieces, but also of multipart compositions and dutar cycles, such as Mukamlar, Gyrklar and Saltyklar (Ahmedov, Ashyrov and Gurbanova 2010:57).

The gidjak, a spike fiddle with a loud, full-bodied sound and broad technical scope, now widespread across the different regions of Turkmenistan, was originally most popular in the Lebap and Balkan schools, that is, to the northeast and west of the country. Its solo repertoire in these regions consists of instrumental variants of dutar and tuyduk pieces and songs (Demir donly, Ovezjan, Bibi). It is also used to accompany singing and epic performance. In the Balkan yoly, a dutar and gidjak ensemble accompanies a singer of epic songs (bagshy or bagshy-termechi). The baqshy’s singing style is characterised by an “open voice” production and an abundance of vocal ornamentation (Gullyev 1985:26).

The school renowned for the performance of large-scale epic poems (dessans) is the Dashoguz yoly in the north of Turkmenistan, adjoining both Lebap and Balkan. The singers of this school are called bagshy-dessanchy (singers of epic poems). During his recitation, the narrator accompanies himself on the dutar. As distinct from the other regional epic traditions, in the Dashoguz yoly the singer playing on the dutar is accompanied by a solo gidjak player (gidjakchy). Music among the Turkmen people has developed in two main forms: folk and oral professional. While complemented by new instruments and performance styles, the musical traditions of the Turkmens had remained largely unchanged by the turn of the millennium.