THE JÂHRI CONCEPT IN CENTRAL ASIA AND ITS IMPLICATION IN SUFISM, MUSIC AND THERAPY

Contributing to the geo-cultural and geo-musical perspective of the conference, I propose to consider jâhri as an ancient emic concept that relates directly to sound and stands apart from and before the Eurocentric concept of music. The jâhri concept has influenced certain intertwining practices and elements, which I will artificially separate to consider here.

Small circle (halqa) of zikr jâhri in the Ferghana Valley
The term zikr, from the Arabic رکذ, meaning ‘recollection, remembrance (of God)’, refers to the practice of invoking the names of God common to Muslims all over the world and central to every Sufi tariqa (‘path, way, brotherhood’). 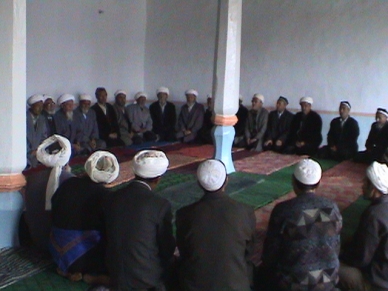 Large circle of zikr jâhri in the Ferghana Valley
In Central Asia the two main methods for the zikr are jâhri (‘vocal, loud, manifest’) and khâfi (‘silent, secret, hidden’). Their virtues are expounded in ancient treatises. Among the special virtues of the jâhri method revealed in such treatises I would like to underline its sonority. The resonant quality of the sacred text and formulae of zikr, being ‘good’ in itself, when enhanced by musical sound ‘makes better’: that is, it can not only cure and heal the hearts (qalb) of its performers (the zakîrs), according to the method of a given Sufi path, but also influence listeners, both physically and spiritually, even at a distance. As ancient writers say, only jâhri can touch the soul of the listener, making its way among the distractions (ghaflat) of his or her life, just as the sonorous call to prayer awakens one who is asleep. This characteristic has an important aesthetic dimension.

Many types of zikr known nowadays have been transmitted orally within jâhri circles, and many of them are documented in ancient treatises. Arguably the most famous among scholars and ethnomusicologists is the so-called ‘saw zikr’ (zikr-i arra, modern Turkish zikr-i erre, Arab al-dhikr al-minshāri). Apart from this, during my fieldwork I recorded and transcribed four types of zikr classified by the accentuation number of their verbal formulae, that is 1–2–3–4 zarbs (yek zarb, do zarb, se zarb, chahâr zarb), together with some other types of zikr, such as ‘zikr of Zangi Buwa’, ‘zikr of Zakariyya’ and ‘zikr Na Domad’ (See De Zorzi 2006).Each of these has a long and deep-rooted history that confirms its name and justifies its recognition as  ‘intangible heritage’ according to the UNESCO parameters.

Movements of a single performer during a raqs-i samâ
The second practice I have chosen to examine is raqs-i samô (raqs-i samâ). The term can be translated as ‘movements and listening’ or ‘movements that arise from listening’. The translation of raqs as ‘dance’ is controversial and even derogatory from an emic perspective, and there are many Central Asian treatises written for or against the use of this term.

Collective movements during a raqs-i samâ
The term samâ‘ has a long history in Sufism that goes back to 10th-century Baghdad. Listening to music and poetry during a samâ‘ can revive particular inner states in human beings which may be described as ‘ecstasy’. Apart from Sufi history, according to the Central Asian dervishes I have met, the actual meaning of samô is simply ‘listening’ to the verses of a mystical poet, not necessarily accompanied by ‘music’ or musical instruments. While dervishes nowadays underline this purely verbal trait, the presence of music and musical instruments in zikr is documented in treatises and accounts from the past, as well as evidenced in some interviews I have conducted. 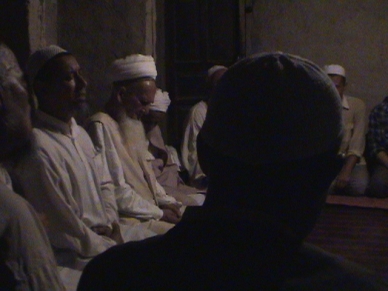 The ‘listening phase’ during the raqs-i samâ
In the world of Islam, the term hâfiz has the special meaning of ‘preserver’, and the name is given to those who know and ‘preserve’ by heart the Qur’an. In Central Asia, a hâfiz (or qâri) is a composite figure that can be defined as religious singer, bard and oral poet. The poems sung cover a palette of religious sentiments and themes: contrition and forgiveness, devotion and veneration of the saints (awliâ) and the Prophets (anbiyâ); profession of faith, death, hope for salvation, advice and wise sayings with Sufi overtones, originating from authors such as Ahmad Yasavi (1106–1166), Boborahim Mashrab

Hâfiz activity can be distinguished according to its context and environment: during a zikr the hafiz sings mystical poems in order to placate those present, giving relief to the zakîrs after certain incandescent phases of zikr or, at a different phase, to rekindle and revive the fire of zikr. Beyond the ecstatic state of zikr and the heightened emotional nature of communal life in Sufi circles (halqa), the hâfiz often also sings and performs at toys, ceremonial meetings held at crucial moments of life, such as birth, circumcision, marriage and death.

It is important to note that some hâfiz became professional, ‘secular’ singers, while continuing their confraternal activity. For instance, the brothers Akmal-khan and Bâbâ-khan Subhânov (or Sofikhânov) were trained as yasavi hâfizs in the circle (halqa) of zikr directed by their father. Famous and beloved in their home town of Yasi (Turkestan) in South Kazakhstan, they had to move to Tashkent to escape political/cultural repression, and there they recorded on Uzbek national radio. The brothers and their séances of zikr are remembered with deep affection by the great Uzbek soloist Turgun Alimatov (see Levin 1996:62-65). They can be heard on the CD Ouzbékistan, Grandes voix du passé (1940–1965) by Jean During and Abdurahim Hamidov (1999:1-3). 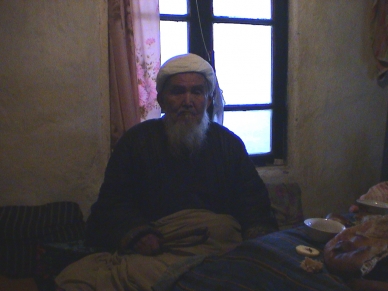 A hâfiz healer with his ritual whip (kamçı) in the Ferghana Valley
As stated above, among the virtues of the jâhri method is its sonority. The power inherent in the Islamic sacred formulae of the zikr can be compared with that in the curative and enchanting formulae typical of shamanism. According to scholars, the healing, curative use of zikr is the evident sign of its affinity to shamanism, despite fifteen centuries of Islam. In order to describe this connection, scholars have coined the terms ‘Islamized shamanism’ and ‘shamanized Islam’. Healing powers are central to some important figures among male Sufi hâfizs and their female counterparts, otin ois, whom I have met. 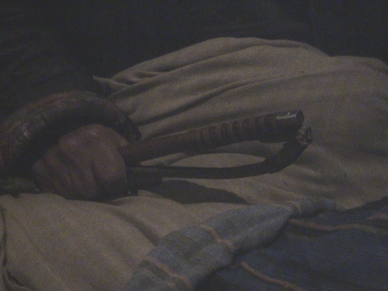 Detail of the ritual whip (kamçı)
During my field research I took note of the statements of my interviewees about their ability to expel demons, mostly with the ritual whip (kamçı), in rituals called damsolish and damchilyasin, or jâhr. The closeness of such ‘ritual fustigation’ to analogous curative practices of shamanism elsewhere in Central Asia and South Siberia is evident.