QAŚĀ’ID-KHĀNĪ AS AN EXPRESSION OF IDENTITY

Tajik Badakhshan is situated in the sparsely populated area of the Pamir Mountains in the south-east of Tajikistan, sharing borders with Afghanistan to the south, China to the east and Kyrgyzstan to the north. People live in villages and towns and are divided into several linguistic groups. Tajik/Persian serves as the official language and lingua franca all over the area. The majority of Badakhshan’s population follow the Isma’ili branch of Shi’a Islam. The Isma’ilis believe in the guidance of divinely inspired Imams, from ‘Ali (d. 661), son-in-law of the Prophet Muhammad down to Shah Karim al-Husayni (b. 1936), the 49th Imam and fourth Aga Khan. Pamiri Isma’ili identity is expressed through a variety of cultural forms.

Qaśā’id-khani, or maddo-khani, is a form of musical performance practiced among Isma’ili Muslims in Badakhshan. This performance fulfils multiple functions and refers to specific cultural circumstances in a social context. It is a performative event believed to have a long history among the Pamiri Isma’ili Muslims and is central to their religious worship and culture. Qaśā’id-khani takes place on a variety of social occasions, for instance, on Fridays, during cultural and religious festivals, at shrines of saints and within funeral ceremonies.

During the performance two local musical instruments, the rubab and the daf, are employed.

Historically, the Pamiri Isma’ili Muslims had experienced a series of political upheavals by the time the Russians seized control of the Pamir region, an occupation which resulted in a division of the Pamir region into Tajik and Afghan Badakhshan in the late nineteenth century (Iloliev 2008). Soviet administration transformed the region into a prosperous oblast but imposed strict control over academic institutions, restricting any form of religious activity. Central to Soviet cultural policy was the creation of national artistic monuments and the promotion of national cultural heritages. For instance, the art music tradition of the Bukharan Shashmaqom was elevated to the status of a national emblem (see Spinetti 2009). Islamic mystics and poets, such as Rudaki, Nasir Khosraw and Rumi were portrayed as “national” Tajik poets, their poetry being considered an expression of “anti-feudal sentiments” (Iloliev 2008). Some musical traditions under this cultural policy were forced underground. However, this did not affect the development of qaśā’id-khani, which persisted through the Soviet period and emerged later as a symbol of cultural, ethnic and religious identities.

As a musical form, qaśā’id-khani comprises five sections. The first section, called bam, is soft and slow in tempo. This is followed by bamu zer (lit. up and down) which is played in high and low registers. The third section is haidari, which progresses from a slow to a fast tempo. The fourth section is falak, followed by sitoyish, the fifth section.

Practitioners of qaśā’id-khani interpret the meaning of these sections in accordance with the Isma’ili belief system. Thus, bam is said to symbolize the beginnings of the soul’s presence in the body of a human. Bamu zer signifies the process of the soul’s return to its origin. Haidari represents the guidance that comes from the Imams, which helps Isma’ili Muslims attain a level of spiritual awareness (ma’rifat). Falak is thought to symbolize the level of communication. It is believed that at this stage communication is established with the angel Gabriel through the medium of a high voice. Sitoyish helps the soul of a person to reach its final destination, that is, to reunite with God. Thus, the musical structure of qaśā’id-khani is interpreted in a way that manifests and serves to construct religious identity among the Pamiri Muslims. 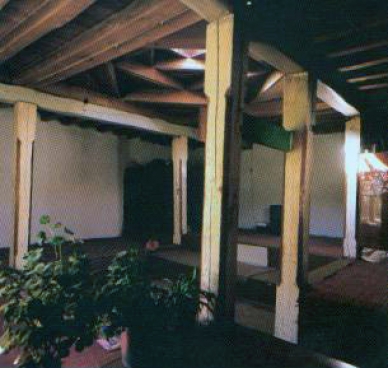 The Pamiri Isma’ilis call themselves Panj Tani. This term is derived from the Shi’i concept of “the five pure bodies” (panj tani pak): Muhammad, Ali, Fatima, Hasan and Husayn. Qaśā’id-khani are sung in praise of these five sacred figures, whose personal qualities and socio-religious importance constitute the basis of Panj-Tani worship.

A reference to this worship is also evident in the architectural structure of the typical Pamiri Isma’ili house where performance of qaśā’id-khani mostly takes place. The house, which functions both as a dwelling and a place of worship, is divided into interconnected sections marked out by five pillars which signify the Panj Tani Pak.

Another marker of religious identity is the plucked lute, rubab, which serves as the melodic instrument in qaśā’id-khani. The Pamiri rubab is a wooden short-necked lute with six gut strings, played with a wooden plectrum. Pamiri Isma’ili Muslims link the instrument to their religion, and it should only be played in religious contexts. The six strings of the rubab represent six prophets: Adam, Noah, Abraham, Moses, Jesus and Muhammad. Venerated as a symbol of Pamiri Isma’ili identity, the instrument is kept at home and handed down through the generations.

Balandmaqam (lit. high stage) is a modern type of rubab, invented by a local musician, poet, astronomer and Sufi, Mubarak (d. 1903). The original balandmaqam is carefully preserved in the collection of Mubarak’s great-grandsons, Lutfullah Zaraboev, in Yamg village in the Wakhan valley. Mubarak created the instrument for purposes of personal meditation (Iloliev 2008). Nowadays, though, it serves to represent the musical heritage of the region.

Finally, religious identity is expressed in qaśā’id-khani through its ritual context. It is performed within funeral ceremonies as a means of consoling, easing grief and supporting the family of the deceased. Azizkho Karimov, a performer from Wakhan whom I interviewed in 2008, explained that qaśā’id-khani did not have an intrinsic association with death. It was a performance that helped the family of the deceased to forget about their misfortune, giving them strength and aspiration to move forward and not to lose hope. It brought rest and peace to people affected by grief. The shared emotional experience derived from qaśā’id-khani enhances the sense of identification and strengthens social bonds (see Abu-Lughod 1986). In the ultimate dilemma of life and death qaśā’id-khani offers comfort; it serves as a catalyst that enables the bereaved to move from one set of feelings to another over a short time span (De Nora 2000). It provides a platform for understanding how people deal with a moment of sorrow, how they handle the loss in their lives. Qaśā’id-khani is also performed on happy occasions where it is intended to bring people together and affirm their solidarity, giving a sense of shared identity and mutual obligation.

Parkes, Peter. 1997. Personal and Collective Identity in Kalasha Song Performance. The Significance of Music-Making in a Minority Enclave. In Martin Stokes (ed.). Ethnicity, Identity and Music: The Musical Construction of Place. Oxford and New York: Berg.