NOMADS, STATES AND MUSICAL LANDSCAPES: SOME DILEMNAS OF KHÖÖMII AS INTANGIBLE CULTURAL HERITAGE (1) 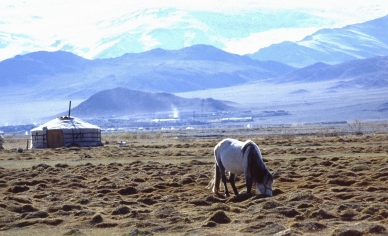 Fig. 1. West Mongolian Altai, 1989.
The former Turko-Mongol nomadic pastoralist tribes of Inner Asia, who have at different points of history belonged to different states, are now divided between the Russian Federation (the republics of Altai, Khakassia and Tyva), Mongolia (West Mongolian Altai), China (Inner Mongolia, Xinjiang) and Kazakhstan. In this paper, I consider the musical landscapes created by these indigenous peoples, now minorities within different states, and the disjunctions and dilemmas that arise when alternative musical landscapes are fashioned by powerful nation-states in the cause of homogeneous national identity and the management of their minorities, a process facilitated by international bodies. I take khöömii throat-singing (overtone-singing) – a musical genre in which a single vocalist produces several simultaneous notes – as a prism through which the dilemmas of national and international identification of Intangible Cultural Heritage and consequent musical landscapes manifest themselves. 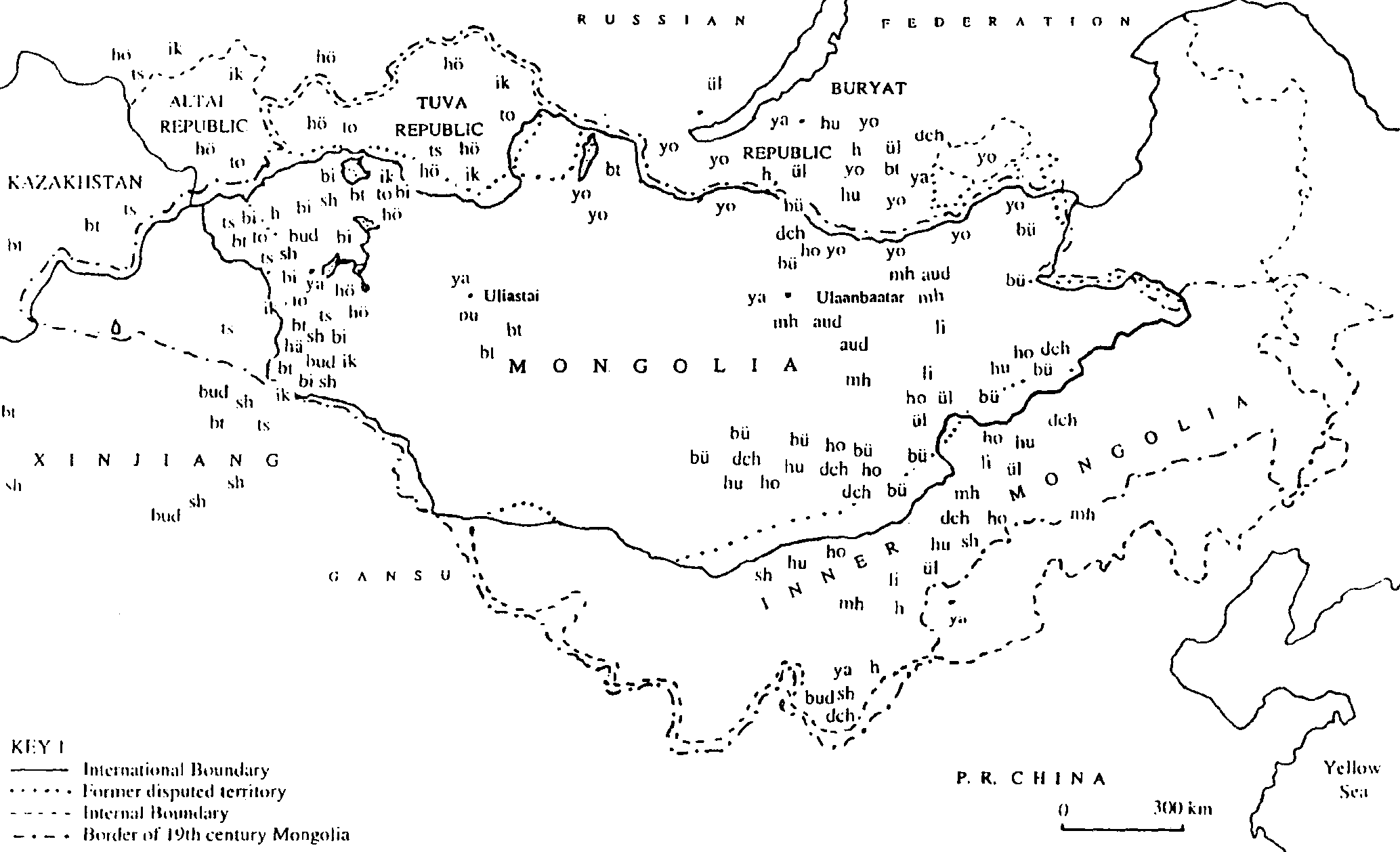 During fieldwork in Mongolia between 1989 and 1996, I plotted two musical landscapes to which former nomadic Mongolian pastoralist musicians connected in performance. These landscapes crossed contemporary 21st century geopolitical borders and evoke historical homelands and previous tribal political confederations (Figs 2 and 3). 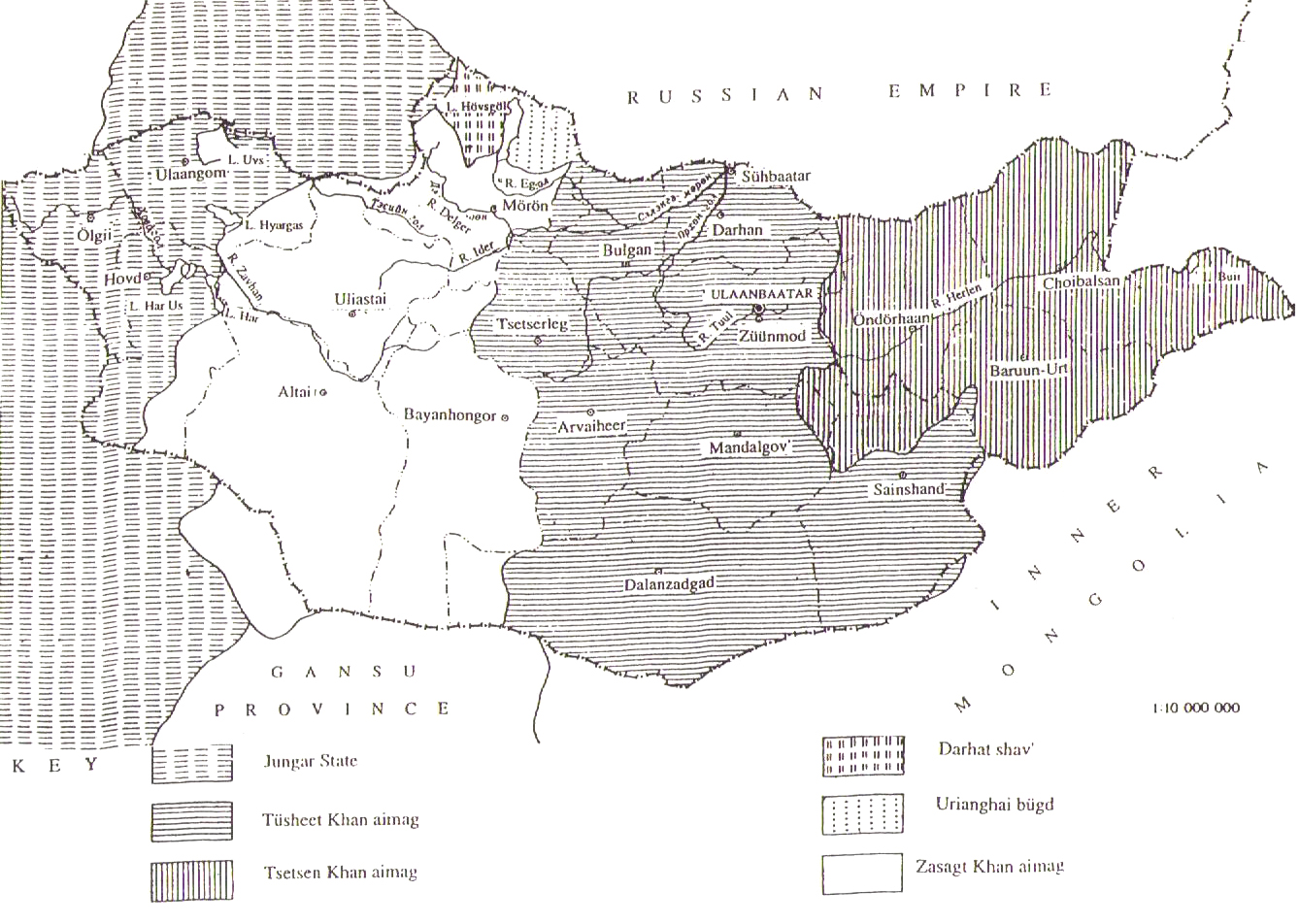 Fig. 4. The Jungar State and early Qing Dynasty. (Pegg 2001: 10).
One, a Western Mongol (Oirat) musical landscape, coincided with the territory of the Mongolian Jungar State (1630 – late 1750s), reaching across the contemporary north-west Mongolian state border into Tyva, Khakassia and Altai in the Russian Federation and the south-western Mongolian state border into Xinjiang in China (Fig. 4). It comprises a timbre-centred musical sound complex centred on thick harmonic textures (cf. Levin with Süzükei 2006) of which throat-singing is the epitome. This vocal technique is also used in epic performance, for instance, by West Mongolian bard Baataryn Avirmed of the Altai Urianghais (Fig. 5, Example 1) and Altaian bard Elbek Kalkin of the Telengits (Fig. 6, Example 2). An instrument that illustrates this musical aesthetic clearly is the end blown pipe as, for instance, played by Narantsogt of the Altai Urianghais (Fig. 7, Example 3).

The other, an Eastern Mongol musical landscape, coincided with that of the early Qing Dynasty of China (1691–1724), reaching across the north-east Mongolian border into Buryatia in the Russian Federation and across the south-east Mongolian border into Inner Mongolia in China. This musical sound complex centres more on discrete notes that unfold melodically in lineal development. 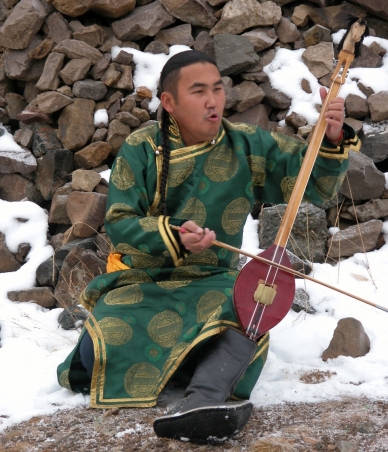 While investigating further the Oirat musical landscape during fieldwork in Altai, Tyva and Khakassia (ongoing since 2002), I noted that throat-singers used different styles, sub-styles, instruments, performance practices and contexts, in order to distinguish their own republic from  neighbouring ones, and their indigenous identities from both Russian and Mongolian. One of the five throat-singing styles professional Tyvan musician Radik Tülüsh performs, for instance, is ‘steppe’ (khovu) kargyraa, which he learnt from his uncle and which is characteristic of the Övür region of Tyva where Radik was raised (Fig. 8, Example 4). 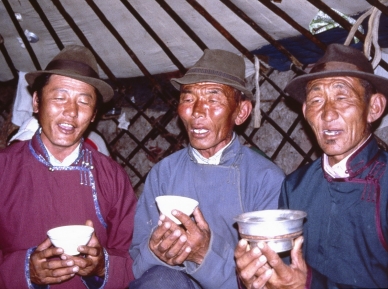 Although, in the Mongolian context, throat-singing arose among Western Mongol Oirats, contemporary Eastern Mongolians perceive it as being ‘Mongolian’ and the source of national pride. Mongolian styles are easily differentiated from Russian Altain styles, since they are pitched higher and consequently require more air pressure. They are identified according to the different parts of the body that channel that pressure: nasal (khamryn), labial (uruulyn), palatal (tagnain), glottal/throat (bagalzuuryn, khooloin), chest cavity/stomach (tseejiin khöndiin, khevliin), andtürlegt/khösmöljin or combination khöömii, as explained and demonstrated to me by Mongolian throat-singer Tserendavaa in 1989 (Fig. 9, Example 5). These national musical landscapes are supported by the UNESCO system of Intangible Cultural Heritage.

The UNESCO system relies on ratification by states of particular Conventions, followed by a government-initiated selection and nomination process for inclusion in digitised Intangible Cultural Heritage (ICH) lists. Although “heritage” has changed in content in recent decades from ‘tangible’ to ‘intangible natural heritage’ and then to ‘intangible oral traditions’, including music, UNESCO’S itemization in lists de-contextualises the practices from social relations and re-contextualises them as objects in national inventories. Because the digitised objects of ICH are attached to nation-states and circulated in global space, they carry with them the potential for international prestige and access to funding, and are open to strategies of nation-building. Governments are able to promote their own nationality policies on a global stage, endorsed by UNESCO. UNESCO’s Intangible Cultural Heritage lists raise, then, issues of national identity. They also raise the question: who owns certain musical styles and forms? This question has implications for relations between nations, and between nations and their minorities, as the following example will illustrate.

Case Study: “China! Khöömii not yours – don’t register in UNESCO!”

The registration of the “art of Mongolian throat-singing” and other Mongolian arts and cultural objects as “Chinese” in the UNESCO Intangible Cultural Heritage List in 2010 caused uproar among Mongols in Mongolia and Inner Mongolia. The petition “China! Khöömii not yours – don’t register in UNESCO!” appeared on the web with almost 9000 petitioners (www.petitionspot.com/petitions/khoomii). Emotions ran high, with some contributors from Mongolia threatening war and death to the Chinese, whom they perceived as trying to “steal their identity” as a strategy prior to the taking of their land. The attempt to eradicate Mongolian identity was also felt keenly in Inner Mongolia. One petitioner put it this way:

"Inner Mongolia is currently colonised by the People’s Republic of China. Therefore, it is important to hear the true voices of the Southern/ Inner Mongolians who have been robbed of their own land, sovereignty and basic human rights over decades since being placed under PRC colonial rule. This process of ultimately wiping out the Mongolian identity of the Southern Mongols is still in progress. Registering Mongolian musical heritage as “Chinese” is just one tiny step toward that final goal of China. I, as one of those Southern Mongolians being silenced by the Chinese imperialist machinery, am here to make my voice heard."

Because Russia did not ratify UNESCO’s 2003 Convention for the Safeguarding of the Intangible Cultural Heritage or the 2005 Convention for the Protection and Promotion of the Diversity of Cultural Expressions, there is currently no possibility for the republics of Tyva, Khakassia and Altai to submit throat-singing as their Intangible Cultural Heritage. It is particularly perplexing to note Tyva’s absence on UNESCO’s digital lists, given its leading position in world music circles and its role in introducing this vocal genre to the world. It is possible that UNESCO will become aware of this ongoing dilemma, since the permanent representative of Azerbaijan to UNESCO, Eleonora Huseinova, has declared: “I will become an advocate of Tyvan throat-singing” (2010).

UNESCO’s shift from focussing on the collection of ‘intangible objects’ to sustaining a system as a living entity is evidenced by the introduction of a list of Living Human Treasures. This involves not only supporting institutions that collect artefacts (songs, music, tales, customs) but also people (performers, artisans, healers), the bearers and transmitters of traditions, together with their knowledge and skills, and local communities. Recognition on a UNESCO heritage list enables funding but the system brings with it its own problems of institutionalisation and musical landscape affiliation, and remains a top-down selection process. The famous Telengit epic bard A.G. Kalkin, for instance, is constantly represented as a treasure of the Republic of Altai. Nevertheless, acknowledging individual musical contributions is a welcome development that could enable a more fluid model of musical geographies or landscapes to emerge.

Musical landscapes or geographies, as with any culture, will be complex and contested, particularly as they involve the thorny issue of individual, local, national and group identities. The following questions arise therefore:

UNESCO’s Intangible Cultural Heritage programme has become increasingly important in the struggle for global recognition both for powerful nations and for vulnerable minority or indigenous peoples. Although marginalised groups, absorbed by dominant societies, are increasingly claiming difference, UNESCO has created a system in which minority indigenous peoples only have voices if allowed to them by their national governments. Ownership of cultural identity, part of the process of nation-building, has become a resource to be defended (Harrison 1999), and the tussle for ownership and identity over throat-singing is a prime example of that. Since ownership, in its first application of the term in the Hague Convention of 1954, was in relation to “people”, rather than the “state”, “nation”, federative unit or region, the following questions arise:

(1) With thanks to The British Academy, The Economic and Social Research Council; local academic institutions and colleagues at the Mongolian Academy of Sciences, State University of Gorno-Altaisk; N.F. Katanov State University, Khakassia, and the Institute of Humanities Research, Kyzyl, Tyva; and local musicians, herders and families.

Huseinova, Eleonora. 2010. “I will become an advocate of Tuvan throat-singing.” Unrepresented Nations and Peoples Organisation. www.unpo.org/article/11085

Levin, Theodore with Valentina Süzükei. 2006. Where Rivers and Mountains Sing: Sound, Music and Nomadism in Tuva and Beyond. Bloomington and Indianapolis: Indiana University Press.