One of the important elements of Nizami Ganjavi’s poetry is music. Numerous examples of musico-literary intersection are observable in the works of this great twelfth-century poet of Ganja, a city in Azerbaijan. 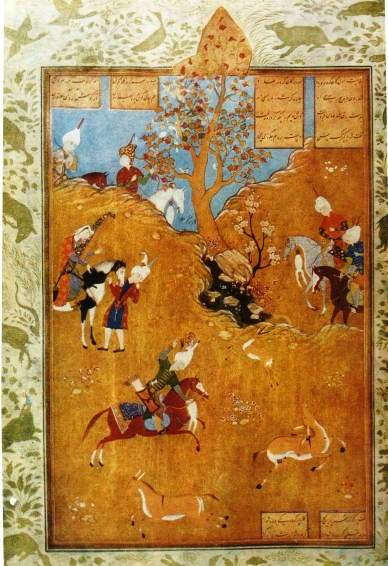 Fig.1. Muzaffar Ali. Bakhram Gur Hunting Accompanied by Fitne. In Nizami. Khamse. Tabriz. 1539-43. British Museum, London
Most remarkable from the musical point of view is the second poem in a quintet of masnavis known as Khamse, the romance Khosrow and Shirin, in which Nizami mentions music frequently. This poem is an important source of information about musical science in the Muslim East. One episode of the poem tells of a feast which features performance by Barbad, minstrel of the court of the Sassanid king Khosrow II Parvez. At that feast Barbad limits himself to performing only thirty (!) musical pieces from his vast repertoire. Nizami gives the titles of all the pieces, providing one-line descriptions of almost each one. Comparable with a present-day concert programme, this listing distinguishes pieces according to their character. Joyful songs are followed by aggressive ones, which give way to sweet music. This is a rare example of poetry listing which records a sequence of 30 musical compositions with their comparative characteristics.

Shakespeare, writing of music, usually touched on its general aesthetic impact, not paying attention to details and theoretical issues. In his comedy Merry Wives of Windsor, when women talk about Falstaff, one of them says that his words are as opposite to his deeds as Psalm 100 is to Greensleeves. Here Shakespeare alludes to the contrast between the lyrics rather than the music of the psalm and the song. Psalm 100, “For giving grateful praise”, calls to “Worship the Lord with gladness”, while in the famous ballad Greensleeves a suffering man claims that his beloved lady has abandoned him. His works contain references to some 13 musical instruments, but for the sake of metaphor rather than information or classification. In his tragedy Hamlet, where Hamlet asks Guildenstern to play the flute, the latter has to confess four times that he cannot, but Shakespeare is making a point about human nature, not musical practice. Usually poets write about what they know and love. Shakespeare showed his professional knowledge of theatre, law and other fields, but he did not pay special attention to theoretical aspects of music.

But Nizami did. There is no doubt that Nizami’s acoustic environment was filled with music and that he had music performers in his close surroundings. He also gives an example of cultural management and a twelfth-century notion of cultural policy. In The Seven Beauties, Bahram Shah, as a way of celebrating the end of famine years, gathers six thousand musicians, dancers and puppeteers from all the cities, divides them into groups and appoints each group to a certain region to entertain people all over the country. 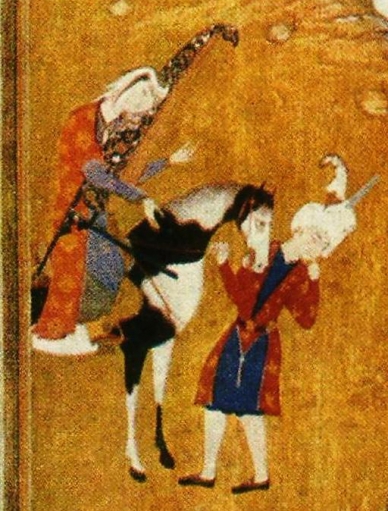 Fig.1.1. Ibid., fragment.
Manuscripts of Nizami’s works were illustrated by numerous artists from different countries of the region, providing “the Persian art of the miniature with an abundance of subject matter: his Khamse, together with Ferdowsi’s Šah-nama, were the most frequently illustrated literary works” (1). These miniatures have become objects of study for researchers from various spheres of knowledge. In his poem Khosrow and Shirin, Nizami devotes much attention to Barbad who lived six centuries earlier. “By the juxtaposition of music from the two eras Nizami bridges 600 years to connect his time with the time of Barbad… As the juxtaposition of the legendary musicians of Sassanid court with the contemporary musical usage of his time shows, Nizami is willing … to create new relationships between people and eras”. (2) Manuscripts of his works were copied by scribes from different parts of Central Asia and the Indian subcontinent, and circulated during the centuries following Nizami’s death in 1209, indeed bridging “peoples and eras”. The miniatures illustrating them tell us about music practices of the even wider Muslim East of the period. According to Galina Pugachenkova (1979), artists illustrating literature depicted their time and their place. (3) A comparative analysis of Nizami’s lines and the corresponding miniatures makes it clear that the artists did not follow the text literally but were very creative in their work. Rather than reproducing the narrative in exact detail, they recreated its content, demonstrating skills and creativity in their treatment of music-related issues, and revealing their own understanding and awareness of the topic. 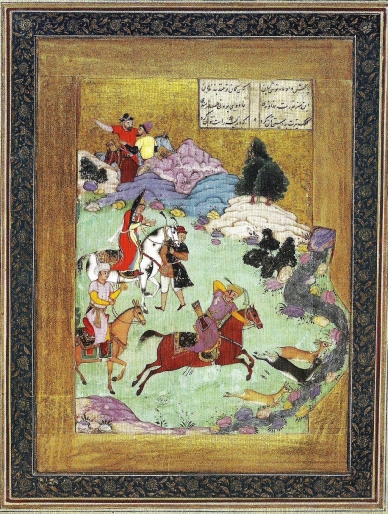 Fig. 2. Bakhram Gur Hunts while Fitne Plays the Harp. In Nizami. Khamse. Signed by Nadim. Mughal India. 1610 (British Museum, London).
For example, in the scene of Bakhram’s hunting the author says only a few words about Fitne accompanying him on her musical instrument. A comparison of several known illustrations of this scene shows that besides depicting the text, artists included details which were absent there but seemed important to them. Thus, medieval miniature illustrations of the scene of Fitne accompanying Bakhram with music always introduce the figure of a man, perhaps a servant, who takes care of Fitne’s horse, while she is on horseback playing the chang, a harp-like musical instrument (Figs 1, 1.1, 2). This figure and similar additional pictorial details are not found in the works of modern artists. “The true representation of various everyday details” (4) by 15th–18th-century artists suggests that they were aware of contemporary music practice and its cultural context. Unlike modern artists, they knew about both music performance and riding, never forgetting to depict the stirrups and reins. A similar example is the depiction in The Seven Beauties of the scenes of Bakhram Shah visiting his wives in the seven domes. Nizami only once mentions the musical component, songs, in the scene of the shah’s second visit, to the blue dome. However, on miniatures the musicians can be found in other episodes as well, because to the artists it was clear that all the king’s leisure was hardly possible without music. At the same time, poetry may contain something not found in illustrations, that is, singing. As the mouth of every person depicted is closed, it is difficult to determine if there is a singer. Some verses by Nizami suggest that performers on various instruments would also sing. For example, in the last tale of The Seven Beauties, Nizami writes about a girl who expressed her passion through music, playing the chang and singing. Thus, any of the depicted performers, with the exception of those playing wind instruments, could be a singer as well. 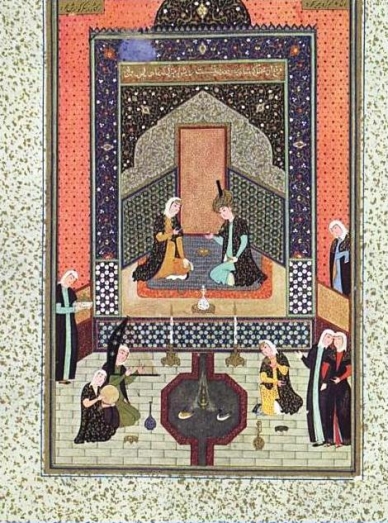 Fig. 3. Bahram Gur in the Black Pavilion. In Nizami. Khamse. Herat. 1524-5. Metropolitan Museum of Art, New York.
In medieval Muslim society different types of musician played different roles. This is evident from the place assigned to them in miniatures. Usually palace musicians are depicted in the central or central bottom section of a painting, i.e., in a position most visible to the viewer (Figs 3-7). This shows that court musicians were accorded greater respect in comparison with those who accompanied hunts and battles. The latter are usually depicted with wind and percussion instruments, often of large size, as their aim was to produce very loud sounds and signals heard at a distance, rather than to play elaborate music. They are given a less prestigious position: at the sides and the top of the painting, scarcely seen in the crowd (Fig. 8), a situation that reflects a certain hierarchy relating to musicians and musical instruments. 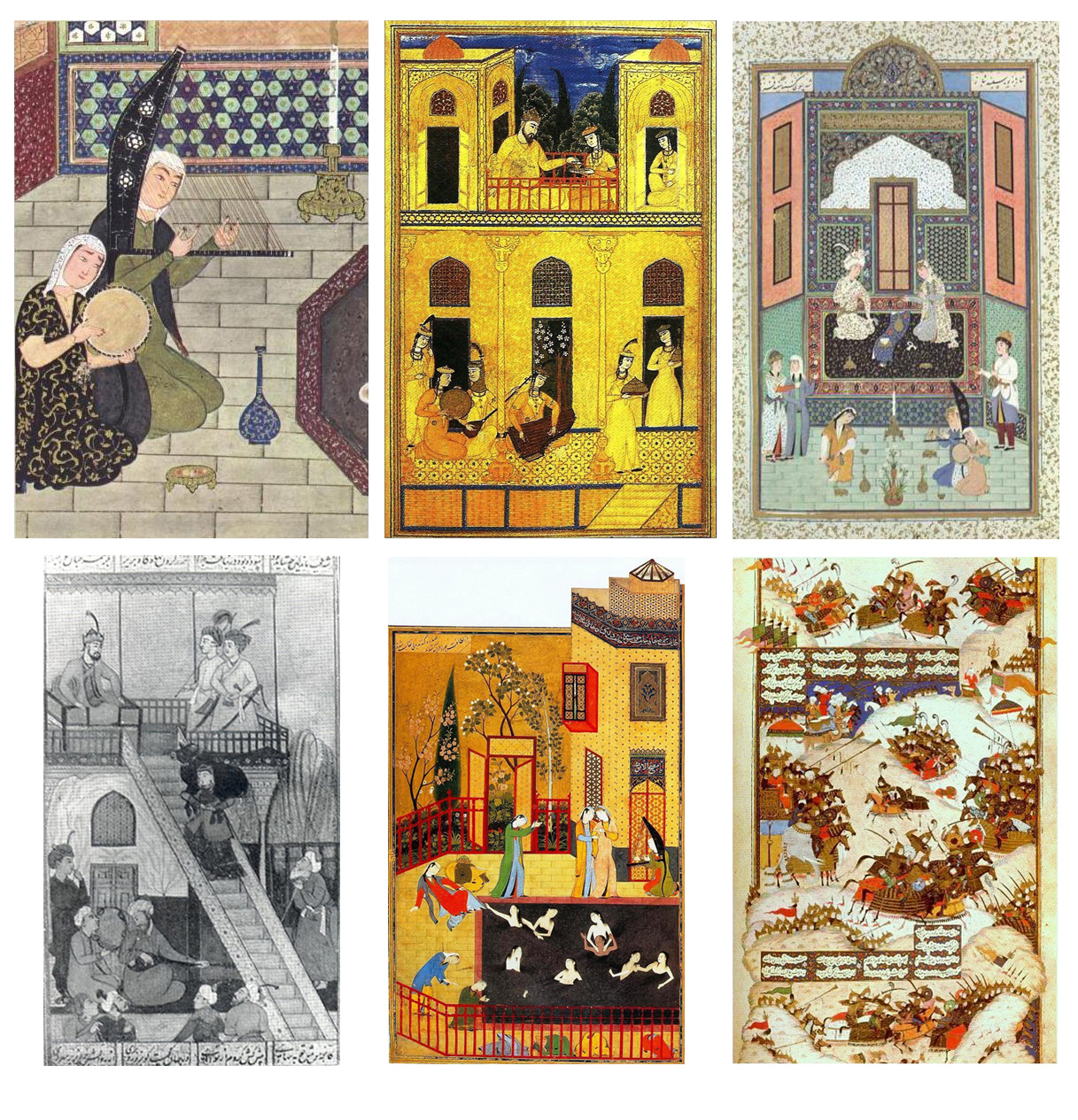