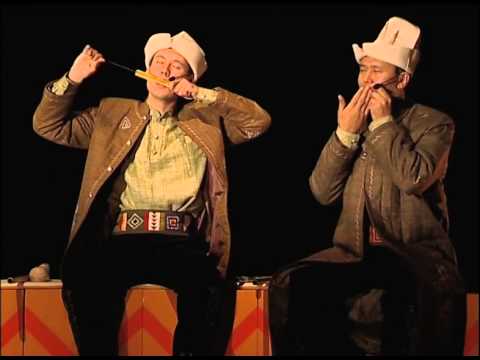 The group takes its name from the mountain range that towers over the high alpine passes linking Kyrgyzstan and China and that is better known by its Chinese name, Tien Shan: “Celestial Mountains.” Founded and directed by Nurlanbek Nyshanov, a gifted composer, arranger, and multi-instrumentalist, Tengir-Too (Too is pronounced like “toe”) provides a living laboratory for Nyshanov’s efforts to find a voice for Kyrgyz music in the contemporary cultural marketplace. Kyrgyz music is rooted in the sensibility of nomads who inhabit a spectacular landscape of mountains, lakes, and pristine grasslands where the elemental energies of wind, water, and echo, the ubiquity of birds and animals, and the legendary feats of heroes have inspired a remarkable art and technology of sound-making.

Tengir-Too performs on traditional Kyrgyz instruments and works within the boundaries of conventional Kyrgyz musical forms, textures, and genres. At the heart of these genres is the music known in Kyrgyz, a Turkic language, as küü (pronounced like the first two letters in “cute”). An analogous tradition in Kazakh music is called kui. Küü refers generically to music composed for a particular instrument - komuz (three-stringed lute), kyl kiyak (two-stringed bowl fiddle), temir komuz (metal jew’s harp), and others - as well as to individual pieces within this repertory. Until the Soviet era, when folklorists began to notate traditional music, küüs were transmitted orally from one generation of performers to the next. But unlike the anonymous creators of much oral-tradition music, composers of küüs dating back to the early 19th century are known by name and are widely venerated by Kyrgyz music-lovers. As the present recording makes clear, küüs are still being composed, arranged, and rearranged. Featured here are new küüs such as Nurak Abdrakhmanov’s “Attila Khan” (track 8) as well as old chestnuts that have become genres in their own right - for example, “Kambarkan” (track 17), which honors the legendary inventor of the komuz and has sprouted myriad variants identified with particular composer-performers.

Tengir-Too’s repertory includes another great Kyrgyz performance tradition: the lyrical songs of the akyn, or singersongwriter. Like the best singer-songwriters of our own time, akyns have traditionally been not only musicians but poets, entertainers, and philosophers. The ability to improvise lyrics was highly prized, and oral poetry contests (aitysh) were a central part of traditional Kyrgyz life. Rooted in diatonic major and minor scales and performed in an extroverted bel canto style, the singing of the akyns is a tradition much appreciated by contemporary Kyrgyz music-lovers.

His Highness the Aga Khan will preside over the ceremony to honour the winners of the 14th triennial cycle of the Aga Khan Award for Architecture on Friday 13 September in Kazan, Republic of Tatarstan. The ceremony will be webcast live starting at 3pm Kazan time.