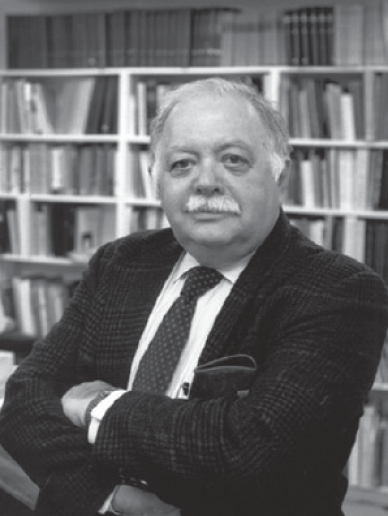 Oleg Grabar.
Copyright:
AKDN
The Award Steering Committee Chairman’s Award was established to honour achievements that fall outside the scope of the Master Jury’s mandate, and is made in recognition of the lifetime achievements of distinguished architects and academics. It has been presented on only three previous occasions.

Grabar, distinguished scholar and teacher, in acknowledgement of the valuable contributions he has made to the study of the Islamic world’s architectural evolution, from the early Islamic period up to the

present. Through his teaching, writings, and lectures, Oleg Grabar has greatly widened and enriched our understanding of the Islamic world’s architectural production, emphasizing its geographic and chronological diversity, as well as positioning it within the wider political, social, cultural and economic contexts. ”

Born in 1929 in Strasbourg, France, Oleg Grabar received his secondary education in Paris and completed his undergraduate work in history at the University of Paris and at Harvard University. He went on to receive his Ph.D. in Oriental Languages and Literatures and History of Art from Princeton University in 1955. Professor Grabar taught at the University of Michigan from 1954 to 1969 before moving to Harvard University, where he was a Professor of Fine Arts and then the first Aga Khan Professor of Islamic Art and Architecture. In 1990, he retired from Harvard - where he continues to be an emeritus professor - to become a professor at the School of Historical Studies at the Institute for Advanced Study in Princeton. He is currently an emeritus professor at the Institute.

Professor Grabar is the author of more than thirty books and over 100 articles. He has held lectureships at several universities and institutions and received many awards including the Charles L. Freer Medal for the Study of Asian Art (2001); the College Art Association’s Annual Award for Excellence (2004); and an honorary Doctorate in Humane Letters from the University of Michigan. During his academic tenure, he took on many additional responsibilities. He was the Director of the American School of Oriental Research in Jerusalem; a member of the Executive Committee of the American Academy of Arts and Sciences; the founding editor of the journal Muqarnas; and a member of both the Steering Committee (1978-1988) and the Master Jury (1989) of the Aga Khan Award for Architecture.

The Illustrations of the Maqamat, Chicago: University of Chicago Press, 1984

The Shape of the Holy, Princeton: Princeton University Press, 1996

The Dome of the Rock, Cambridge: Harvard University Press, 2006

Masterpieces of Islamic Art: The Decorated Page from the 8th to the 17th Century, New York and Munich: Prestel, 2009